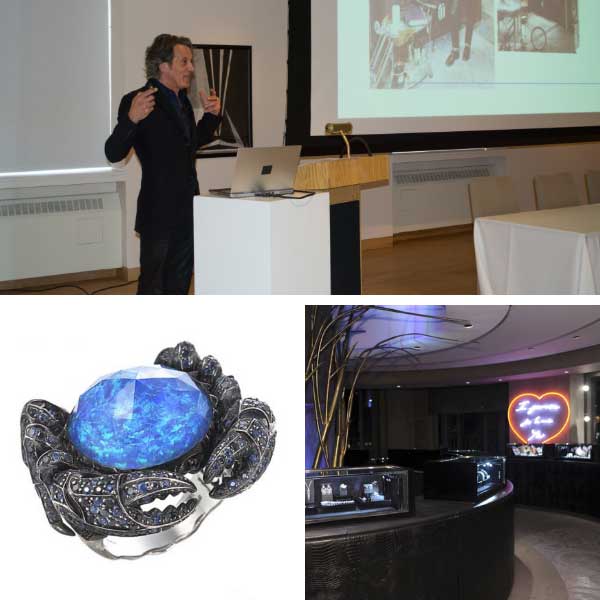 Having recently written about jewelry designer Stephen Webster, I was keen to attend his talk at the Initiatives in Art and Culture’s (IAC) “Gold: Legacy, Leadership, Luminescence” conference earlier this month at Bohemian National Hall in New York City.

It was essentially a recap of Webster’s topsy-turvy rise to acclaim—but there were a few key tips and takeaways baked into the master storyteller’s narrative, not unlike a hot cross bun bursting with colorful candied fruit (can you tell I’m writing over Easter weekend?).

Titled “Goldstruck” (also the name of Webster’s 2015 book—a fact he acknowledged with a chuckle), the talk was a highlight of the annual IAC event, which gathers experts, enthusiasts, press, and other members of the jewelry trade who share a passion for gold and a commitment to the use and promotion of the precious metal in a socially and environmentally responsible way.

No one was doing the doublet thing before Webster saw its design potential and made this once-lackluster and undesirable material something wildly sexy and covetable. He described how a long journey of experimenting with doublets of lapis lazuli, turquoise, or green agate led to his ultimately landing on his famous Crystal Haze treatment. It was not a runaway success at first, but the design went on to become not only a brand signature, but also a style icon its own right. It was a great reminder to retailers to think with an open mind and to pursue disruptive talent. Taking a chance on something that might not immediately present itself as a golden goose may pay off in the long run.

Webster’s brand was born of a time that predates the world of pay for play and so-called influencers angling for free jewels. Instead of paying personalities to promote his product, influential individuals developed a natural affinity for Stephen Webster’s jewelry and, thus, helped build his brand’s recognition, credibility, and cachet. When he worked in a shop in Santa Barbara, Calif., Elizabeth Taylor came in and purchased one of his chalcedony rings, to match the color of her famous violet eyes. Later, after a photo was published of Madonna wearing Webster’s Crystal Haze ring on her index finger, the moment created a frenzy among ’90s-era socialites who would hit up Bergdorf Goodman to “get the look.” Similarly, Maxfield in Los Angeles asked Webster to create a ruby version of his Rockstar ring for an anonymous client who turned out to be Ozzy Osbourne, one of many high-profile musicians who would go on to place orders for their own versions. No doubt, the publicity machine is more nuanced, complex, and persnickety these days, but even now, it’s hard to beat the classic combination of a compelling product, authentically fashionable celebs, and press photos popping up at the right time and place.

JCK has of course been covering this topic for a while now, and Stephen Webster is a brand that grasped and embraced this concept early on and continues to put it into practice in successful ways. From his “arty” (his words) showroom in London to his pop-up tequila lounge at Bergdorf’s, Webster has always favored nontraditional retail experiments that feel edgy and irreverent and cleverly fuse fine jewelry with style and art. For example, when Stephen Webster’s L.A. retail location opened nine years ago, it looked nothing like a jewelry shop. With its dim lighting and a large neon said that said “I promise to love you,” it had a rock-and-roll vibe, complete with the No Regrets Lounge on the second floor of the store, which became a creative space for chefs, sculptors, graffiti artists, photographers, DJs, a milliner, and others.

Top: Stephen Webster’s “Goldstruck” talk was a highlight of the IAC’s annual gold conference. In chronicling his path to success with his trademark chutzpah and wit, he touched on the importance of creating retail environments that align with the vibe of the jewelry you’re selling. He also revealed to attendees his best-selling ring: Jewels Verne Crab ring, in 18k white gold with pavé black diamonds, black opal, and quartz crystal (top photo courtesy of Initiatives in Art and Culture; bottom left and right photos courtesy of Stephen Webster).