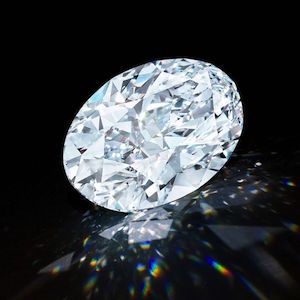 On Monday, Sotheby’s Hong Kong sold a 102.39 ct. D flawless (pictured) for $15.7 million, or HK$121 million, at a livestreamed auction that was notable because it attracted a record-setting online bid and had no reserve.

While the sale price wasn’t all that remarkable—in 2013, a 118 ct. D flawless sold for $30.6 million—the single-lot sale represented a break from tradition because there was no reserve price on the stone. In addition, as typical for the COVID-19 era, it had a heavy online component. One online bid came in at $10.97 million, which is the highest-value bid ever placed for a jewel online.

However, that online bid wasn’t the offer that carried the day, which came in over the phone from a Japanese private collector. Shortly after the sale, the collector renamed the diamond the Maiko Star, after his second daughter. Last year, the same collector purchased an 88 ct. D flawless from Sotheby’s and named it the Manami Star, after his eldest daughter.

Patti Wong, chairman of Sotheby’s Asia, said in a statement: “We are grateful to Diacore for their trust and confidence in allowing us to offer this diamond without reserve, the result for which testifies not just to the importance of this diamond, but to the market for diamonds more broadly.”

However, industry analyst Russell Shor wrote on Facebook that he wasn’t all that impressed with the final result. “Should have have a reserve in my humble opinion,” he said.

The 102.39 ct. diamond was cut from a 271-carat rough discovered at the Victor mine in Ontario, Canada, in 2018. Diacore cut and polished it in a process that took more than a year.

A Sotheby’s statement noted that only eight flawless or internally flawless diamonds over 100 cts. have ever been sold at auction.

Prior to the sale, Sotheby’s produced a video saluting the stone: