The legacy of lab-created gemstones dates to the late 19th century, when the son of a Parisian watchmaker perfected a method for mass-producing rubies. In growing corundum, chemist Auguste Verneuil made a coveted “cardinal gem” accessible. Today, RSA and Herbert Stephan KG fuse green technology and old-world craftsmanship to offer white sapphires (also a corund) that Bernd Stephan describes as “the siblings of those rubies.”

Glaciers and Crystals
In the natural world, glaciers transform landscapes as they shape mountains and valleys. Since 1925, glaciers in the French Alps have fueled production at RSA to grow white sapphires that exhibit the exact physical and chemical properties as natural sapphires. 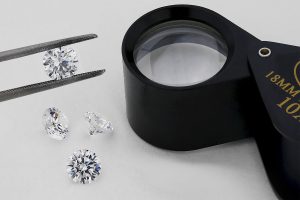 White sapphires consist of pure aluminum oxide, so production begins with aluminum salt. Glacial water feeds RSA’s facility in Grenoble, France, where electrolysis separates hydrogen and oxygen to transform the salt into powder. These elements are later reunited in the generation of the hot atmosphere necessary for growing crystals from this powder in four-liter “furnaces.” Between 50 and 100 furnaces operate at a single time. White sapphire rough takes between 6 and 12 hours to form, depending on the size of the crystal. This carbon-neutral process offsets thousands of households’ worth of fossil fuels.

Craftmanship and Transparency
The rough travels to a Sri Lanka cutting center for preforming. This cutting center is owned by Herbert Stephan KG. Bernd Stephan says, “They’re part of our family business. There’s a long tradition of sapphire mining in Sri Lanka, and local families of craftsmen who have worked with sapphires for generations. We wouldn’t be able to supply the industry without their talent.” 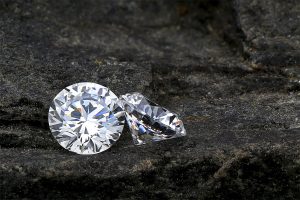 From Sri Lanka, the preformed rough goes to Stephan’s facility in Germany near Idar-Oberstein. Thanks to abundant agate mines, Idar-Oberstein’s roots in the gem-cutting industry reach back to the 14th century. Bernd Stephan’s great-grandfather founded Herbert Stephan KG in 1932 and became an international supplier to the gem trade.

Bernd says, “We’ve been stonecutters for three generations, and we have three generations of some families working at Stephan. If you look at our DNA, it’s about bringing good people under one roof and doing things no one else will. We’re known for a unique mix of craft and technology.”

Elevated and Accessible
For customers who care about the story behind their stones, lab-grown white sapphires offer provenance with a minimal footprint—not to mention a more accessible price point. They’re chemically and physically identical to mined sapphires. Their purity enables a wide variety of sizes and cuts, with consistency from stone to stone. And with a Mohs hardness of 9, they’re second only to diamonds, making them easy to set. Bernd says, “We’re seeing more and more jewelers who want to keep their materials costs down, and these white sapphires offer an eco-friendly option.”