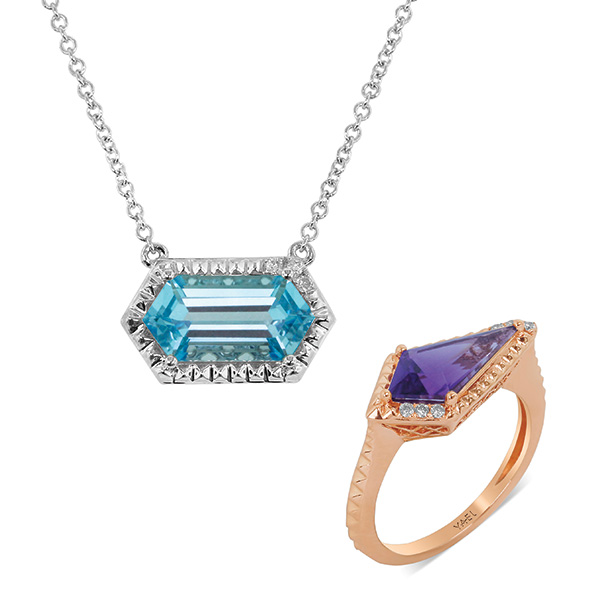 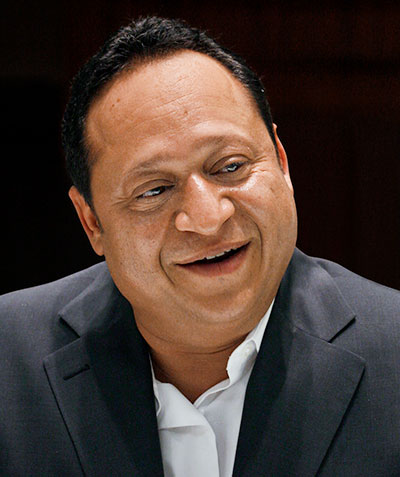 When so much of the industry seems to be moving toward monochromatic pieces and diamonds, Yael Designs has doubled down on palette, building heart-stopping pieces around gorgeous gems with colors that practically slap you in the face.

“It’s hard to see new ideas in the jewelry business today,” owner and founder Yehouda Saketkhou says. “More than anything, despite what’s happening in the world, that’s what we try to do.”

Saketkhou’s journey in jewelry began after he arrived in San Francisco from Iran at age 13. He worked for his uncles at a modest jewelry store on the main drag in the heavily touristed Fisherman’s Wharf neighborhood. The store sold hundreds of premade pieces, but Saketkhou took the opportunity to teach himself how to design; when local rap artists came in looking for over-the-top jewels, Saketkhou worked with them to create the pendants of their dreams. As a result of this creativity, his following grew exponentially. In the 1980s, he made pendants for every member of Run-DMC.

When he was 18, Saketkhou changed things up, opening a jewelry kiosk at a cooperative in Union Square. His stuff was simple back then—mostly mountings with diamonds. Then he got into the bridal business, designing rings and having them manufactured in Los Angeles. “It was nice just to make something very personal to people,” he remembers.

In his mid-20s, Saketkhou took another leap, opening a store with his father and brother. He continued expanding his design skills, conceptualizing certain items that sold for more than $1 million. He recalls having a stable of high-profile clients who would fly out on private planes from Arizona and Texas to meet with him to plan a piece, then fly back to pick up the finished jewelry.

Finally, in 2001, he went out on his own again, debuting Yael Designs. The first few years were tough; Saketkhou mostly was buying blank mountings and diamonds, having pieces set by his own jewelers, and selling them wholesale. Then, one fateful morning, his top salesperson was robbed, and he basically had to start again from scratch. “It was a sort of wake-up call for me,” he says. “From that point forward, I swore I’d only do colorful, one-of-a-kind, high-quality pieces that were unlike anything else on the market.”

These became the tenets of Yael Designs: bold color, imaginative form, and indisputable quality. Saketkhou designs a new collection every year. He also sketches almost every design by hand before digitizing it.

Most of the collections incorporate movement. With the Fairytale collection, which has stones that spin in place, the movement is literal; in other collections it’s implied by diamond-studded tracks of gold crossing over the heart of stones from Brazil, India, Italy, and Israel.

All told, Yael Designs has nearly two dozen collections. For each of these, Saketkhou has drawn inspiration from various parts of his life—hanging out as a child in his father’s rug shop in Iran, exploring Paris after he fled the Iranian Revolution, and traveling the world ever since. “Everywhere I have traveled, I have taken photography of different carvings on the wall, different buildings, different windows, and different gates or doors. Always architectural things. Always structural. A lot of that became translated into pendants or maybe the side view of rings, or center stones,” he says.

“Yael Designs is more than jewelry; it’s quite simply art,” says Ivan Levi, a jewelry designer and motivational speaker who also serves as national sales manager for the company.

Today, the white-walled Yael Designs showroom sits on the second floor of a building with art galleries and antique booksellers at the north end of Geary Street, near Union Square.

The elite environment is reflected in Saketkhou’s jewelry prices: Many high-end pieces sell for $12,000 and up.

This year, as Yael Designs celebrates its 20th anniversary, the company is overcoming a slowdown sparked by the coronavirus pandemic by adding a handful of more ­accessible collections—a concerted effort to expand the business by ­appealing to an entirely new base of customers. In recent years, Yael Designs has made a push to break into the lower tiers of the market. The whimsical diamond fashion line Yaelita—developed with emerging San Francisco–based metalsmith Carolyn Simon—features dozens of geometric shapes and other recognizable forms such as butterfly wings and cherry blossoms. Yaelita, which now comprises nearly 200 pieces, evokes the architecture of St. Petersburg, Russia, where Saketkhou attended the World Cup soccer games in 2018.

Earlier this year, in the middle of the pandemic, Saketkhou introduced another collection with an approachable price point ($600–$1,200 retail): Borealis, which incorporates stones such as amethyst, garnet, and topaz in 14k gold. “It’s about cuts, shapes, and faceting,” Saketkhou says. “It looks very expensive. It looks very technical. It has the integrity of everything else from Yael with great feel and quality. It’s just at a lower price point.”

After nearly 35 years, Saketkhou’s enthusiasm for the jewelry business remains strong. He continues to draw inspiration from his family, including his ­developmentally disabled sister, Yael, the brand’s namesake. Saketkhou is also father to two young children, the older of whom was born the day of the grand opening party for the current gallery in 2013.

His father, who lives in the Bay Area, still works from time to time, and Saketkhou sees the same future for himself.

Always looking for novel approaches to jewelry design, and fearless in trying new things, Saketkhou is the quintessential innovator. A recent customer analysis revealed that his clientele is composed of independent women who are intellectual and love art and animals. Consequently, his next big collection—under the Yaelita label—will include animal-mask pendants.

“I wake up every morning, have my coffee, and say, ‘Thank God I’m going to a job I enjoy,’ ” he says. “I’m fortunate. I’ve never worked for anyone else. I’m good at my job. I bring people joy. And I always get to come up with something new. It doesn’t get much better than that.”