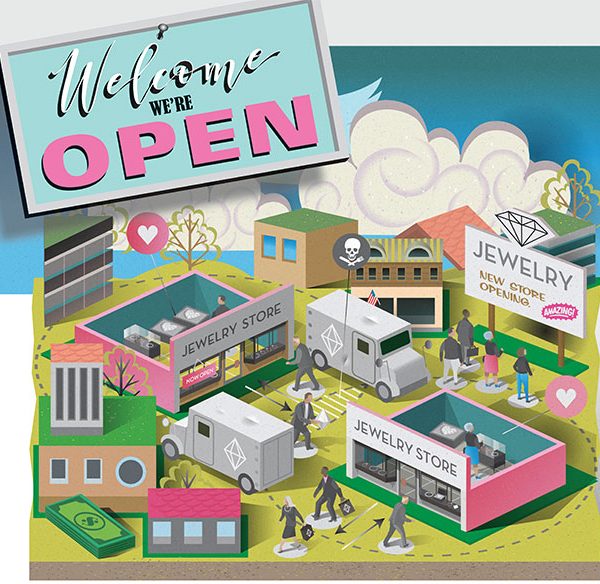 For the first time in a generation, conditions may be more favorable for independent jewelers to open new doors than to close existing ones.

“This is the second great opportunity for expansion I’ve seen in the 50-plus years I’ve been in the business,” says Lee Berg, CEO and founder of Lee Michaels Fine Jewelry, which operates eight stores in Louisiana, Mississippi, and Texas and is now opening a unit in Albuquerque, N.M. “Our first big chance was when Zale went into bankruptcy in 1992, allowing us to expand in Louisiana and Mississippi. Today, with stores going out and markets opening up, good retailers can similarly find deals all over the place.”

Opening additional units is generally less tricky than establishing an initial sustainably successful store, since jewelers can draw on their experience.

“We recently revamped our model,” says Kenyatta Black, who owns Philadelphia Diamond Co. in Philadelphia with his wife, Nicole, and is opening a second store in Atlanta. “We went to a smaller footprint, reducing inventory and focusing more on trends. And we really honed our targeting. We’re very confident the same recipe can work elsewhere.”

Chuck Cooper, owner of Van Atkins Jewelers in New Albany, Miss., recently opened a second store on historic Courthouse Square in Oxford, Miss.: “We’ve got our fast sellers, the pieces we sell over and over. Prior to opening we loaded up on those. And then we split them between the two stores.”

Multiple doors also enable jewelers to rotate merchandise, presenting pieces to a broader audience. “We carry an extensive diversification of product,” explains Harold Rousso, owner of Brownlee Jewelers, which recently opened its eighth store in the Charlotte, N.C., market. “With several locations I’m able to move inventory around, customizing selection for the clientele at each store.”

Components of the business that can easily be centralized include operations and marketing. And depending on proximity of new and existing stores, marketing outlay can frequently be controlled by sharing expenses.

“We already have our area covered pretty well,” Cooper says. “We did add a couple billboards dedicated to the new location. But mainly we’re just including both stores now in most of our existing marketing.”

Opening units in new markets, however, requires a bit more work. “But it’s always based on projected volume,” explains Ryan Berg, who as Lee Michaels’ market president will add the Albuquerque store to his portfolio. “And with our experience in other markets, we can come in with a pretty good idea of what pricing should be.”

The Adage About Location Is Key

Jewelers stress that the primary challenge in opening a new store is picking the right spot.

“We consider new opportunities based on several key factors—primarily the economic climate of the area and its competitive landscape,” says Ryan Berg. “When we began looking at Albuquerque, we found there wasn’t a Rolex or David Yurman account in all of New Mexico. You have to look for the right opportunity. The real trick is to figure out which ones to take and which ones to pass on.”

“Our flagship store is a destination business, and we didn’t want to risk losing that,” Cooper says. “So we began by looking at a town about an hour and a half away. But the Oxford location was just too hard to turn down. And so far, we’ve found that 8 out of 10 people coming in are new business.”

Once a market is determined, choosing a specific space is just as crucial. For jewelers who know their area well, the decision might be based on intuition.

“I had been looking at this property for three years,” recalls Ceylon Leitzel, co-owner and president of Leitzel’s Jewelry in Myerstown, Pa., which opened a second store in Hershey, Pa., in June. “It’s right on the main highway going in and out of town. And we’re right in a triangle with one road going to the country club and the other to the park. It’s a prime spot.”

Others prefer to work with a real estate agent. “I went online, found a commercial Realtor, and emailed him what I was looking for,” says Kenyatta Black of his new Atlanta location. “He came back with seven places. The first was in Buckhead, in the Monarch Centre. It had previously been under plans to become a jewelry store but hadn’t worked out. It was like God had his hand in this. I didn’t look at the other six.”

Along with selecting the right location, staffing poses the other big challenge facing those seeking to expand. Jewelers say that, as always, family is key in this industry so reliant on trust.

“We have our third generation in place now,” says Leitzel, who just opened his family’s second store. “I’m equal partners with my daughter, Allison. And her husband, Trevor, is a CPA. So we had three main players who could handle either store at any one time. We were confident we had the staff to make this happen.”

Growth also offers owners a chance to create attractive career opportunities for nonfamily employees. “The hardest part is staffing,” says Rousso of operating his company’s eight stores. “But people come to us and see they can grow within the company. Everyone in our management positions started as salespeople and have climbed the ladder.”

Buildout itself can range from minor to extensive. “We didn’t require any major construction. The only things we needed to do were paint, flooring, and cases,” Nicole Black says. “In Philly, our color palette is purple and gray. We have a certain look, and both stores look very similar.”

Redd & Co. Fine Jewelers, which in July opened a second store in Allentown, Pa., undertook more extensive development. “We created a whole new concept of a store, even including a TV lounge with a beer and coffee bar,” says co-owner Redwan Kholi. “We made it very comfortable, and people really enjoy the atmosphere. They walk in and say, ‘Wow.’ ”

Getting a new location up and running may take longer than expected. Jewelers advise formalizing a plan with a detailed timeline and doing your best to stick to it.

“We wanted [the store] to look and feel like the South, so we hired an architect and a local designer who specialize in antebellum houses,” says Cooper, describing his second Mississippi location. “She had everything picked out before we started, so things did go quickly.”

In choosing to open a store in Oxford’s historic downtown square, Cooper had to overcome some problems most jewelers don’t encounter when expanding their business. “It has these hundred-year-old floors, and we had to raise them,” he says. “We had to tear down all the walls and install the lighting, nicer bathrooms, and the alarm system and have all of our cabinets custom-built. But even so, the construction ultimately only took about a month. We were ready by the opening game of Ole Miss football season. That’s very big here.”