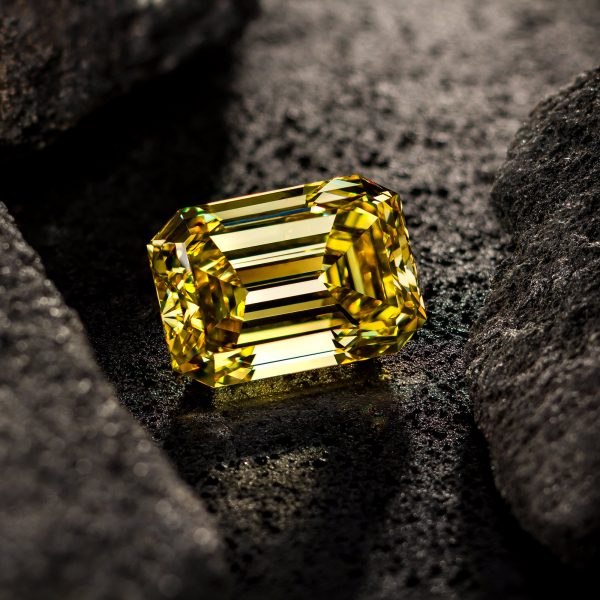 In October 2016, Dominion found something unexpected at Ekati, the diamond mine it owns in Canada’s Northwest Territories: a 65.93 ct. piece of bright, sparkling yellow rough.

It was a big stone. It had a strong yellow color. It would no doubt make an impressive polished stone. The trick was turning it into one.

The art of cutting and polishing is one of the most specialized in the diamond industry. Techniques range from the “bang it out” bread-and-butter work done on smaller stones in mass-production factories in India to the painstaking labor of highly trained craftsmen responsible for transforming million-dollar diamonds.

Colored diamonds are among the most complicated diamonds to manufacture, as cutters weigh their key consideration—maximizing the stone’s color—against clarity and carat size.

Following the discovery, Dominion sent its newest pride and joy to be cut at New York City–based Optimum Diamonds, which specializes in manufacturing rare fancy colored pieces. Among the items the company has worked on: the 14.62 ct. Oppenheimer Blue, which in 2016 garnered $57.5 million at Christie’s, making it one of the most expensive diamonds ever sold at auction.

Cutting the Dominion yellow was a complex process, requiring weeks of planning, double-checking that planning, and dealing with the unexpected, along with copious amounts of elbow grease. Optimum gave JCK a front-row seat to the transformation.

From the time the piece of rough arrived at Optimum’s New York City office, the principals knew they were dealing with something extraordinary, especially given its Canadian origin.

Figuring out what to do with the rough was a group effort, with all the company principals weighing in.

Diamond cutting is “this amazing mixture of art and science and math and business,” says Optimum founder David Shara. “It can be a real puzzle.”

One key question: What shape should it be? The group narrowed down the choices to an antique cushion, a ­radiant, and an emerald cut.

The easiest choice, and the one most companies might go for, would be a ­radiant. That has long been the most popular shape for fancy colored diamonds, as the rounded corners of a radiant save weight.

But in this case, the stone’s color was so strong—it was shaping up to be a fancy vivid—Optimum also considered an emerald cut. It’s not a popular shape for fancy colored diamonds because it leaks color. But consumers favor the emerald cut, and the group felt the color was strong enough that it could withstand a little leakage.

After a few days of discussions, the group decided to go for the emerald. It wouldn’t be the conventional choice. But it would stand out, and that could make the stone more valuable.

“We could have pulled off a bigger stone with a radiant, but it’s not as special,” says Joshua Sheby, company principal. “If you have an emerald-cut vivid, it’s truly a vivid, due to the difficulty of attaining color in an emerald cut.”

Emeralds have a culet—a bottom point. This rough also had a bottom point, but it was off-center, not where the cutters ­wanted. To create a properly centered culet, Optimum used lasers to remove a chunk of the bottom—about 4.7 cts. worth. In an unusual move, Optimum decided to turn that piece of excess into a 2.5 ct. “satellite” stone (a radiant).

Yellow diamonds are all about their color. But, for reasons best known to Mother Nature, the color in colored diamonds is rarely spread evenly throughout the stone. So cutters need to determine where color is strongest and highlight that.

“You need to put the concentration of color in the right place so people can see it and so it can be reflected in the right place,” Shara says. Because GIA grades colored diamonds faceup, cutters generally try to place the best color under the table, where it can be seen.

Most of the actual cutting at Optimum is done by Zevan Cohen, a low-key third-generation craftsman who spends eight hours a day working on diamonds in a small windowless room the size of a closet. While Optimum uses lasers and computer modeling, Cohen ­freely admits a diamond factory would never make the cover of Wired.

Even though JCK visited in winter, the air-conditioning in the cutting room was cranked, to minimize humidity. Sometimes Cohen fires up the dehumidifier as well. “Diamonds can’t cut if there is a lot of humidity,” he says. “You don’t get the right friction.” Diamond cutting also tends to produce a lot of heat—sometimes enough to make the stones turn colors—so the air-conditioning can come in handy.

Cutting this yellow is, Cohen freely admits, a big job, though he’s been doing it long enough that he isn’t overwhelmed.

“With certain stones, there is no room for error,” he says. “Sure, when there’s millions of dollars on the line, there is pressure. In market terms, there’s a big difference between 9.99 and 10 carats.”

And Mother Nature often throws curveballs. An inclusion that looks small under the microscope may turn out to be far bigger on close examination. Sometimes the act of cutting moves flaws throughout the stone.

When JCK first visited, there was loose talk about the stone possibly earning a flawless grade. But given it has a pinpoint as well as a feather, that seems unlikely.

“We could remove the feather to increase the clarity, but it’s diminishing returns because you want to keep the proportion and there’s not that much of a price difference between the VVS1 to VVS2,” partner Josh Cohn says. “With cutting, at every stage, you are reexamining and reassessing the thought process,” he adds. “It’s about how the stone is reacting. Is it collecting color where it needs to? Is the stone going in the right direction?”

This diamond, however, didn’t require much second-guessing. The process went mostly as planned. That’s partly due to the material involved—yellow rough is considered easy to cut, a lot easier than other colors.

“Colorless and yellow are very similar: The color is more ­homogenous,” Shara says. “With other fancy colors, you see more zoning. In green, the color is very localized and most of the time on the surface. Blue has areas of zoning. Pink is very stressful. There’s graining, a lot of stress on the stones. Then forget about purple. Purple’s a mess. It is typically Russian material. It has a lot of flaws inside it. It’s just difficult.”

By the time the yellow was ready for GIA, it was weighted a little over 30 cts. (it had lost more than half its weight). It was still receiving a final going-over. One problem: residual polished lines.

“Each facet is supposed to act like a beautiful mirror,” Shara says. “Right now they are all covered in polished lines. That’s killing the look of the stone. So those facets are not doing the reflecting they are supposed to. When they’re removed, that will make everything much more beautiful, a lot less dingy.”

Of course, the stone looked beautiful already, but having come this far, Optimum was determined to work on every last detail.

“People who buy incredible diamonds like this are sticklers for details,” Shara says. “Everything has to be perfectly shaped, perfectly balanced, perfectly polished. You just have to take your time and do everything systematically and very carefully.”

Then came the clincher: GIA weighed in with the coveted fancy vivid grade, making the 30.54 ct. stone the largest fancy vivid yellow to ever come out of North America. Dominion named it the Arctic Sun.

What happens next is up to Dominion. It’s possible the mine might want to showcase the stone and get some publicity out of it, as Rio Tinto did with the 187.7 ct. Foxfire diamond found at the Diavik mine, also in the Northwest Territories. There’s talk the yellow might make an appearance at JCK Las Vegas.

But eventually it will likely be sold. In a switch from how most diamonds are marketed, the stone has documented provenance, and Optimum has taken detailed photos of every step of the polishing process (see sidebar), which it hopes to present to the eventual buyer. Given that, as well as its unusual shape, Optimum believes the yellow will be valued in the millions.

That would make the work and planning and everything else worthwhile. “The buyers may not know everything that goes into a diamond like this,” Shara says. “But at the end of the day, you want someone to put it on their finger and say, ‘This is awesome.’ ”

How a Rough Becomes a Gem 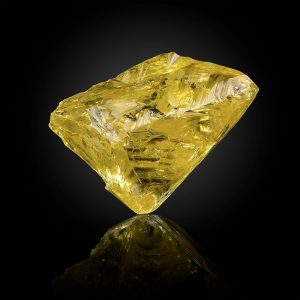 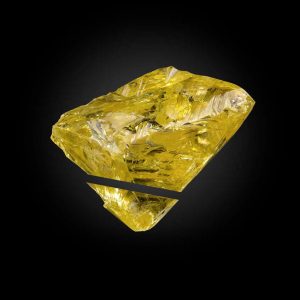 2.
To center the culet, Optimum lasered the diamond into two pieces. The smaller piece came out to 4.7 cts., which was later cut into the “satellite” stone.
Current weight: 60.52 cts. 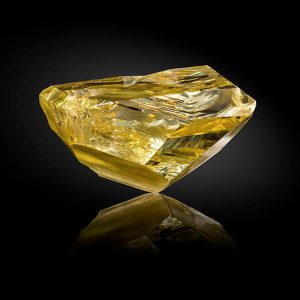 3. This is the diamond post-lasering, with a more centered culet. Some window facets have also been added to give an interior look at the stone, and there’s been preliminary work on the table facet.
Current weight: 53.27 cts. 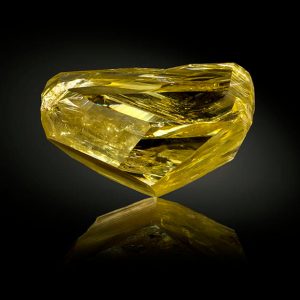 4. The stone is starting to be blocked, meaning the major facets are being put into place. The perimeter’s been worked on as well. The laser left lines that gave it a brackish (muddy) appearance.
Current weight: 49.53 cts. 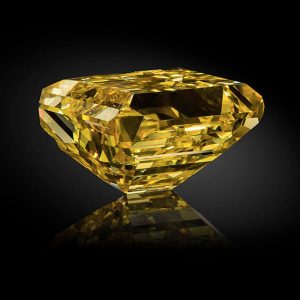 5. There has been more faceting on the crown (top) and pavilion (bottom) as well as shaping on the outline.
Current weight: 44.57 cts. 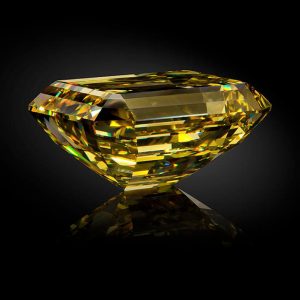 6. The emerald shape is clear. Almost all facets are in place, though many are still not at the right size or angle. And there are still polished lines.
Current weight: 36.68 cts. 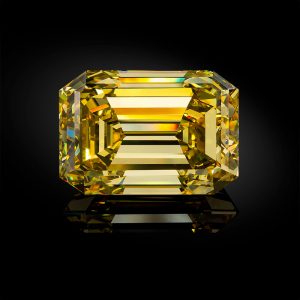 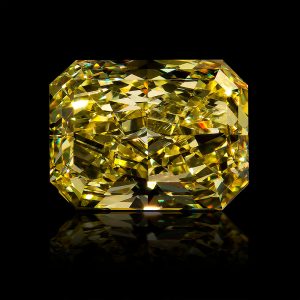 7. With a fancy vivid yellow grade from GIA, the diamond, named the Arctic Sun, is ready for its close-up.
Final weight: 30.54 cts.