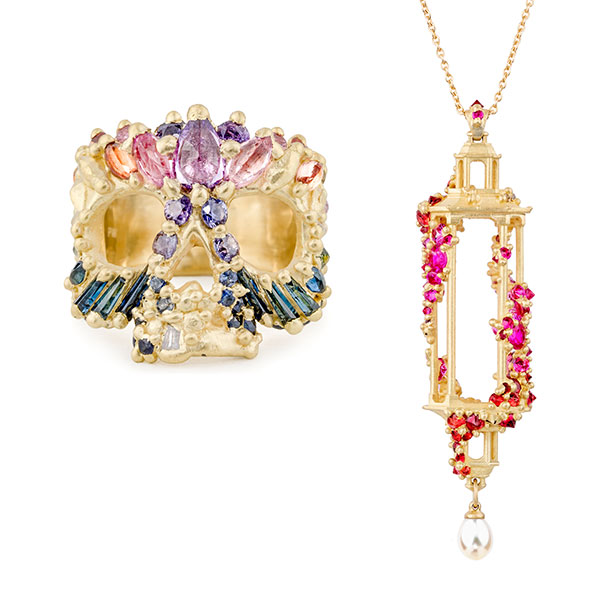 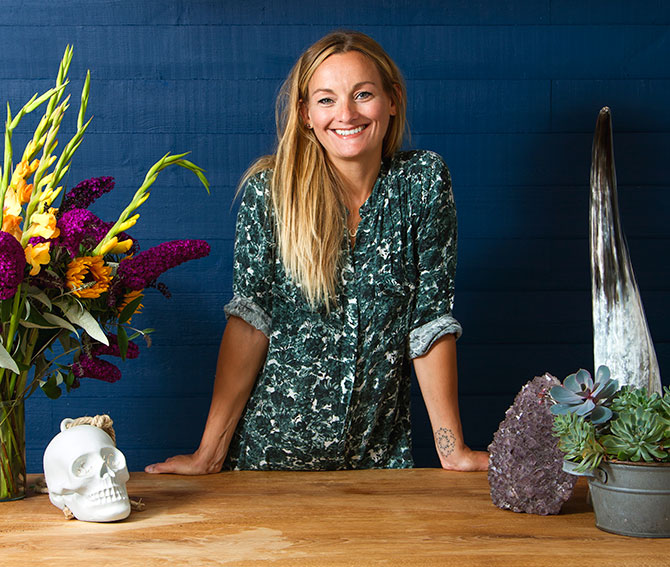 Everything you need to know about Polly Wales can be found in her yellow gold skull ring studded with candy-colored sapphires.

Equal parts masculine and feminine, barbaric and beautiful, earthy and ethereal, the piece is over the top without taking itself too seriously. Instagrammers call such juxtapositions #roughluxe.

The one-of-a-kind design is the result of an organic collaboration between Wales and her partner, James, who is also the father of their two children. At the time he made the ring, they weren’t working together yet. “He was just…making stuff,” explains Wales. “It’s what James does.” Lucy Peacock, Wales’ lead wax sculptor, had the inspired idea to apply Wales’ signature stones to James’ skull. James gave them his blessing to incorporate the design into their collection.

Ever since she studied jewelry at London’s Royal College of Art, Wales has been experimenting with wax-casting gemstones directly into gold instead of surface-mounting them. This method blurs the boundaries between metal and stone, often with dazzling results. It can seem as if the gems are emerging from cracks in the earth.

When she started doing this, Wales had to rely on outside craftspeople, which made for more mishaps than masterpieces. “I would take my stuff to the caster, and they would say, ‘You never brought that piece in,’ or they’d lose pieces. They would kind of disappear things,” she recounts. “It was awful. I just thought, Well, this is my life.” But her jewelry-crafting life took a turn when James offered to learn casting.

These days, James is an essential element of their mom-and-pop business. Not only does he do all of the casting, he handles their photography and 3D modeling, much of it on some MacGyver’d contraptions of his own design. “He can kind of do anything he puts his hands to,” says Wales, who wears the original skull ring, the one without the stones, every day.

Wales and James are expat Brits living in Los Angeles. In just a few short years here, they have turned what had been a side hustle into a full-fledged business, Polly Wales Fine Jewelry. Back in London, Wales was selling pieces and getting attention for her designs, but she was supporting the work by lecturing about jewelry at universities and teaching jewelry-making to women in prison. “There was an advert up at college, and it paid more money than anyone ever paid me in my life,” she recalls. “I feel pretty passionately that everyone should learn about how those women got into that position, realize that anyone can fall through the cracks. You don’t have to be some evil kind of person.”

Having a business was never really what Wales imagined for herself. “I make this peculiar jewelry,” she explains, “out of the realm of the expected norm. I used to make things that would end up in German jewelry art books, so having a full-time career making weird jewelry was not something anyone expected. Until now, I never had anything to lose. It’s always been just about the journey, about taking people on an adventure.”

That adventure began at home. “Lucy’s been with me for five years,” Wales says. “When she started, she was working on the windowsill in my spare room.” I’ll let that sink in for a moment: Her designer’s workspace was a windowsill. “There were four of us in my spare room,” Wales continues. “I was going to convert the airing cupboard”—in England, that’s the room where the boiler is. “That’s when James said it’s time to move out of the house.”

One day, James and Wales’ mother sat her down at the kitchen table for an intervention of sorts. “It was when my daughter was 1 and I had to go back to work,” she recalls. “James and my mum said, ‘You don’t need another job now, you can do this full time.’ I remember being so scared, sitting at the table crying, saying, ‘What will I do for money?’ ” Like a lot of creative people, Wales wasn’t sure there was anything else she could be doing. “So [with] the money we were saving up to buy a house, we bought a casting machine and some gold, and that was that.”

“Back in London, we were making jewelry and we were selling it, but it wasn’t a business,” Wales admits. “It was a shitshow. We had no systems. Because I don’t know anything about any of that stuff. I’m a maker. I trained as a jeweler, I trained as a goldsmith, I trained as a sculptor. That’s what I do.”

Today they are settled in at a penthouse atelier in the Los Angeles Jewelry Mart. One room is devoted to ­designers, seated at proper benches. Another room is Wales’ ­office, and a couple of rooms at the back are where James’ magic happens. Those rooms are chock-full of jury-rigged ­machines: a vacuum pump tied to a mixer and an exercise vibro plate with a washer. Next to that is a kiln. All of their manufacturing is done in-house.

It’s also unusual to start a business in London and relocate it halfway around the world, a move that Wales justifies this way: “British people spend money on houses; they don’t spend it on jewelry.” Plus, the bulk of her customers—even then—were in the United States.

But why Los Angeles? “Because I love New York.”

Wales laughs. “No one can live in New York,” she says of the city’s exceedingly high cost of living. “Here we could get the space. And we’ve got two kids, so it felt like L.A. is the place. And there’s a jewelry district!”

Not exactly a ringing endorsement, but Wales says she’s finally coming around to appreciate the quirky, spread-out West Coast city whose gems are often hidden. “Last weekend, we went to this gathering of food trucks that was a tribute to Jonathan Gold,” she says of the beloved restaurant critic of the Los Angeles Times, who recently passed away. “Listening to him talk [on video] kind of consolidated what I know: that Los Angeles is really all these little cities, but when you think about it again, in that context”—of immigrants from all over the world running hole-in-the-wall eateries that Gold famously ­championed—“it becomes quite fascinating instead of just this sprawling mess.”

She’s even amused by how California style has taken hold in London of late. “That seems crazy,” she says. “Everyone is trying to dress like they come from Silver Lake”—the L.A. neighborhood where she lives. “Like, what are you all doing?”