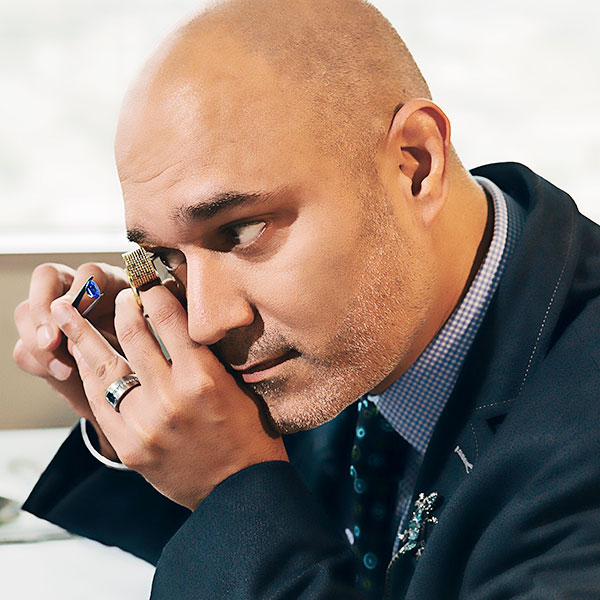 With his closet full of blazers and professional demeanor, jewelry designer Niveet Nagpal might be taken for a real estate executive or finance guy—were it not for a rather conspicuous brooch in the shape of a gecko that habitually clings to his lapel. “This is Alexis. She’s my signature piece,” he explains of the 18k white gold lizard, whose slender back is encrusted with alexandrite (her namesake) and who stares unblinking at him with tsavorite eyes and a flick of a ruby tongue, her legs wiggling slightly when he walks.

Alexis is the first piece that Nagpal kept for himself from Omi Privé, the jewelry line he founded in 2012, and she’s become something of a company mascot. “She’s in all our lookbooks,” he says. She always appears on the last page—a playful coda to a serious collection of sparklers.

As it happens, Nagpal was a finance guy, albeit briefly. “I went to USC [University of Southern California] and studied business,” he says at his office in West Covina, a suburb east of Los Angeles where he grew up and now lives with his wife and two young children. His mother and father, Preeti and Omi, are the founders of Omi Gems, which deals in wholesale loose colored stones and is the 34-year-old parent company of Omi Privé.

Although passionate about gems since he attended his first trade show at the tender age of 6, Nagpal never gave much thought to joining the family business. Instead, he opted for a job at an investment firm after college. But a few months in, he realized it wasn’t for him. “I’m looking around and thinking, This doesn’t feel right,” he recalls. “It didn’t really occur to me how special the jewelry industry was until I ventured outside of it.”

Nagpal subsequently told his parents he wanted to work for them. They agreed—on the condition that he first get a graduate gemologist degree from GIA. “It was there that I learned the scientific side of the industry,” he says. “Things like mineral classifications and trace elements I’d heard about, but I didn’t really understand.” Nagpal joined Omi Gems in 1997, and he’s been there ever since.

The gem trade has many family dynasties, but the Nagpals’, which stretches back seven generations on Preeti’s side, is particularly impressive. As Burmese ruby miners in the early 1900s, they amassed a small fortune but lost it all during the 1940s, when forced to first flee Burma (now Myanmar) when the Japanese invaded and later India when the British withdrew. “My grandfather basically had a sachet full of rubies to his name,” Nagpal says. Eventually, the family rebuilt the business. In 1985, Preeti and Omi moved to Los Angeles and independently started Omi Gems. “My dad ran the business,” Nagpal says. “My mother was really about the stones. She got to be an expert on the slight variances of shade and clarity.”

Over the decades, Omi Gems moved increasingly upmarket, sourcing the finest stones and supplying them to premium retailers. Occasionally, Nagpal would be commissioned by a client to create a jewelry piece. But he harbored no aspirations of a career pivot. “I was a stone guy,” he says. “I never considered myself a designer.” However, during the 2008 recession, piqued by what he considered a drought of quality mounts induced by the economic downturn, he began to think otherwise. “I’m looking at beautiful stones going into cookie-cutter mounts and I’m just like, This isn’t cool, these are my babies,” he says. “And that got me thinking, Well, what would I have done?”

In 2011, Nagpal submitted a diamond and sapphire bracelet he had made for a client to the American Gem Trade Association’s Spectrum Awards. To his surprise, it won. “They asked for our jewelry brand name,” he recalls. “I said, ‘Well, we don’t have one.’ It was an awakening.” He introduced Omi Privé the following year.

As for his swift rise to become one of the industry’s most sought-after designers of colored gemstone pieces, Nagpal demurs, like a director ceding the spotlight to his stars. “It’s all about the stones,” he says. “Each one has its own unique personality. I just play off that.”

Back in his office, Nagpal plucks a diamond baguette necklace with cornflower blue sapphires from its stand and fastens it around my neck. The platinum frames sit coolly against my skin. “Every surface of our designs is finished,” he says. “For this, we took a lot of care in fluidity and comfort. You can see that it fits perfectly around your neck.”

We move on to a tray of loose stones: milky opals, brilliant pink tourmalines, emeralds the color of a freshly cut lawn. “There are so many things that have to go right for a gem to even form. They are perfect storms of nature.” Nagpal holds a tangerine spessartite garnet to a desk lamp, and it dances with light. “My job is to respect their force and rarity,” he says. “I want to bring out the very best in them.”

Omi Privé offers both a signature collection and custom designs (the latter designated with a hidden piece of alexandrite). Everything is made to order in Los Angeles using techniques such as hand-drilled micro pavé and hand-drawn wire. The stones are sourced from mines throughout the world and cut mostly in Bangkok. When they arrive, Nagpal will often recut them to his exacting standards. He’s become especially partial to designing cocktail rings—gobstoppers encircled with halos of ­glittering pavé stones. “It’s an issue,” he laughs. “I’ve been getting requests for more earrings and pendants.”

For the Luxury show this year, Nagpal will bring both loose stones and finished pieces. “I don’t think anyone does it the way we do—working as both the source and the designer,” he says. “A customer can choose to be part of things from the very beginning, from when we source the gems to cutting them to working one-on-one with me on a custom design.” Nagpal ensures those who don’t take part in its creation process still get a lesson in what makes a piece special. “I create a [written] story for each one,” he says of the Omi Privé collection, which is available at a handful of select U.S. retailers including Houston’s Thomas Markle Jewelers and Steve Quick Jeweler in Chicago. “It includes everything from the history of the stones to why I made certain design choices.”

Nagpal points to a photo on the wall. “That picture was actually taken right before our first Luxury show six years ago,” he says. It shows Nagpal and his father, who still comes to work every day, examining a sachet of sapphires on the kitchen table, while Nagpal holds his then 1-year-old son—three generations in one frame. “My son is now 7, and he loves stones and knows all about them. Hopefully someday he will join the business,” he says. “But if he doesn’t, that’s okay. Whatever makes him happy.”