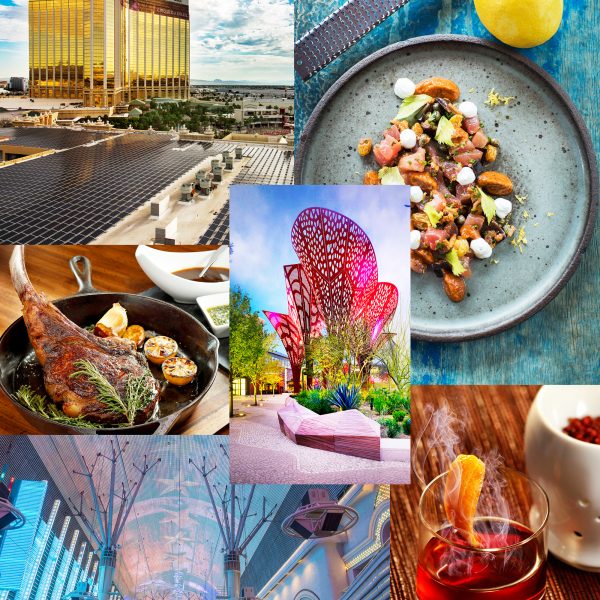 Planning your trip to JCK Las Vegas in June? Here are the most mouthwatering restaurants and rockin’ concerts in sin city—guaranteed to keep you going long after business hours.

If you’re a fan of the Hangover films, you can’t help but chuckle at Stu’s line in the third movie: “Someone needs to burn this place to the ground,” he says. “I told myself I would never come back.” Stu (played by Ed Helms) is referring to the night of shame, debauchery, and mayhem in Las Vegas that set all three Hangover plots in motion.

However, contrary to what popular culture would have us believe, most of what happens in Vegas is not hard partying, gambling, or one-night stands. A good number of us associate Sin City with trade shows, networking, and hard work.

Las Vegas visitor statistics back up this business-centered version of the city. Whether you’re in fashion, tech, or fine jewelry, Vegas has been the No. 1 trade show destination in the United States for 22 consecutive years, according to the Trade Show News Network. In addition, the World Travel Awards named the city the world’s leading meetings and conferences destination for 2016, the fourth year in a row it has received the honor. 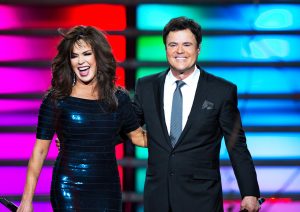 In response to the demand for trade show space, Mandalay Bay Convention Center—home to JCK Las Vegas, which runs this year June 5–8, a few days later than its typical schedule, due to the Shavuot holiday (LUXURY runs June 2–8, invite-only June 2–4)—added 350,000 square feet of exhibition space last August to the tune of $70 million. The convention center now boasts more than 2 million square feet, with 900,000-plus square feet of contiguous exhibition space.

After the workday is done, however, Las Vegas is the place to wine and dine clients or perhaps take in a show. And, sure, it’s great to get in some shopping, but can’t you do that ­anywhere? Why not take advantage of Vegas’ famous ­residency shows featuring big-name performers and top-tier restaurants ­imported from all over the world? Read on to learn what’s new and notable in the Entertainment Capital of the World.

Of course, what would Las Vegas be without its bumper crop of celebrity headliners and spectacular performances? The stunning Park Theater at Monte Carlo Resort and Casino officially opened in December with Stevie Nicks and the Pretenders delivering the venue’s first concert. The 5,200-seat Park is expecting a number of A-listers to follow suit this year, including Bruno Mars, Cher, and Ricky Martin, who’s due to make his residency debut in April with performances slated through September.

“We had a successful Park Theater opening in December and look forward to an exciting entertainment lineup in our first year,” says Dan Bernbach, executive director and general manager of the theater. 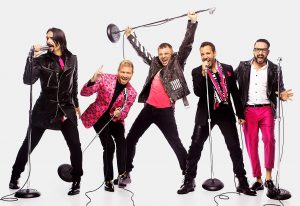 If you’re heading to Vegas early, Céline Dion will be wrapping up her residency show at Caesars Palace on June 2 and 3 before leaving for her European summer tour. After taking a break to be with her family, Dion returned to The Colosseum with a revamped show incorporating 31 musicians, in a full orchestra and band. Also on June 2 and 3, catch Ron White’s gritty show at The Mirage Hotel & Casino as the cigar-smoking, scotch-drinking funnyman brings his trademark “blue-collar” comedy to Vegas. Die-hard fans have a chance that weekend to catch Donny and Marie Osmond at the Flamingo. The performers have the same flashy backup dancers and good old-­fashioned rapport (not to mention toothpaste-commercial smiles) they had on their decade-defining variety show in the late ’70s.

JCK Las Vegas is also the perfect opportunity to see the very last week of Jennifer Lopez’s “All I Have” concert, which wraps up J.Lo’s nearly yearlong residency at The Axis at Planet Hollywood Resort & Casino on June 11. And, as if that weren’t enough, the Backstreet Boys announced a new residency show, “Backstreet Boys: Larger Than Life,” at The Axis Theater beginning March 1. Finally, if you’re into soulful funk music, see Cameo at the Westgate Resort & Casino through June 30. 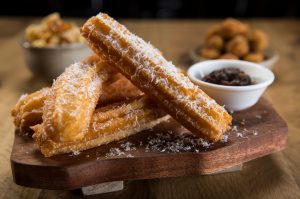 It’s been decades since Las Vegas officially moved on from steakhouses and buffets to a world-class lip-smacking hub for prominent chefs and some of the best eateries anywhere. A number of restaurants are vying to join the ranks of Spago and Le Cirque, two hot spots that ushered in the era of celebrity chefs.

Last fall, Libertine Social opened inside Mandalay Bay. James Beard Award–winning chef Shawn McClain has upgraded traditional American bar food to small plates, such as toasts and dips, and more substantial entrees like a Wagyu skirt steak. “When people come to Las Vegas, they want to have a good time and experience the best food and drinks out there with their friends who know how to have fun, which is what Libertine Social is all about,” McClain says. 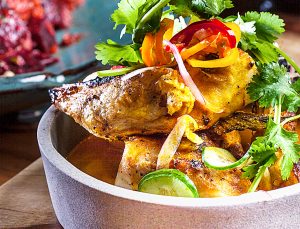 Is Cuba on your travel list, but you have yet to book a trip? Get a taste of the Caribbean island at the Sugarcane Raw Bar Grill, which debuted at The Venetian last November. The Vegas outpost of chef Timon Balloo’s popular Miami eatery offers such delicacies as West Coast snapper ceviche and sepia squid ink aioli.

If British casual pub food is more your speed, head to the recently opened Gordon Ramsay Fish & Chips, where you’ll find that signature dish as well as numerous variations on the chips themselves: sea salt; chipotle, jalapeño, and chorizo; ­truffle, Parmesan, and chives; and cacciatore spice and fresh ­basil. The Hell’s Kitchen star opened his fourth restaurant in Vegas in November in The Linq Promenade—a dining, shopping, and entertainment district in the heart of the Strip—and it has ­become one of his most popular. 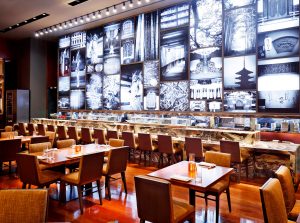 The sushi bar at Morimoto

Another newcomer worth ­sampling is Turmeric Flavors of India, especially if you’re planning to check out the booming downtown restaurant scene. Owned by brothers-in-law Rajesh and Ritesh Patel, Turmeric Flavors boasts traditional dishes like chicken ­curry and palak paneer alongside items you rarely find on an Indian restaurant menu, such as beef curry. Wash it down with Milk & Honey, a drink composed of Hangar 1 kaffir lime vodka, coconut milk, honey, turmeric, cardamom, and coriander.

Meanwhile, Masaharu Morimoto, Japanese chef and star of Food Network’s Iron Chef America, opened his contemporary Japanese restaurant Morimoto Las Vegas at the MGM Grand in October. Guests can select from three dining experiences, including a sushi bar and a main dining room, as well as the chef’s first effort at teppanyaki, a style of Japanese cooking that uses an iron griddle. “Morimoto Las Vegas is different…because it’s in Las Vegas,” Morimoto says. “People choose to come to Las Vegas from all over the world. I wanted to take the challenge. I mean, who doesn’t like Vegas?”

JCK editors reveal their to-do lists while in Las Vegas:

• Managing editor Melissa Rose Bernardo will be hitting the outlets! Between BCBG, Adidas, Off 5th, and Last Call, the bargains at the 175-store Las Vegas North Premium Outlets are well worth the taxi ride. (premiumoutlets.com/outlet/las-vegas-north)