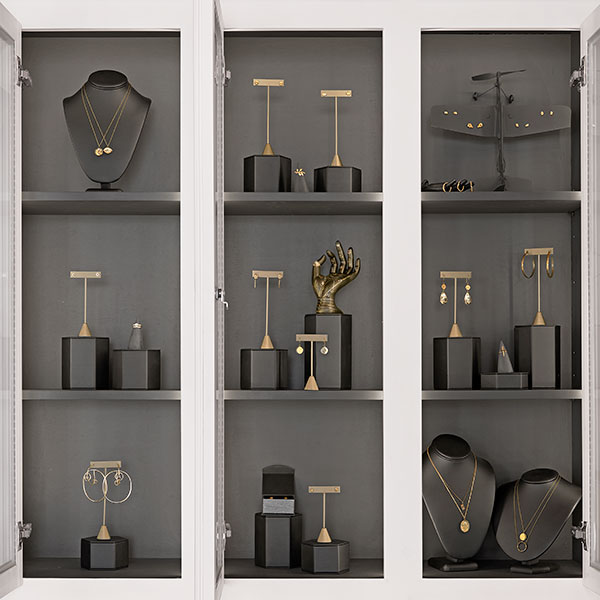 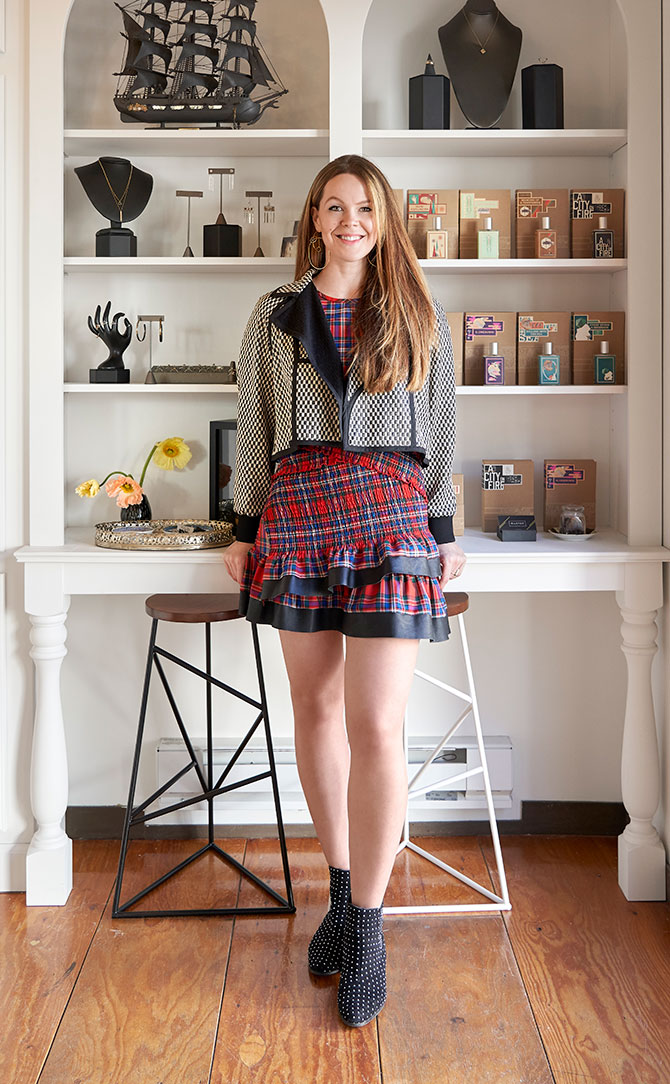 With less than 200 square feet, Rebekah LeFay has masterfully designed a layout with floor-to-­ceiling ­cabinets that maximizes space and highlights Riveter’s ­expansive collection of stones, stacks, studs, and custom pieces. “That was planned down to the literal millimeter,” she says of her build-out. “Usually people want more ­storage, but I kept bumping the cabinet size back and getting closer and closer to the wall—everything had to be very precise for it all to work.”

When she started her business a decade ago, LeFay had no formal training. In fact, the Nashville native’s initial foray into jewelry-making was a class on beading and wire-wrapping at Michaels craft store. “I inherited a large ­quantity of my great-aunt and grandmother’s jewelry,” she says. “A lot of it was broken, and by necessity, I learned how to fix it.” LeFay wanted to learn more, so she ­enrolled in a metalsmithing class at Watkins College of Art in Nashville. She started building her own collection and traveling to fairs and festivals as well as selling wholesale to boutiques—until a failed trade show left her near bankruptcy at age 24.

LeFay hedged all her bets on a Los Angeles trade show only to see roughly 40 shoppers over the course of the weekend. “I bet the farm and came back with nothing,” she says. “Then I totaled my car on the way to my birthday dinner.” She took those misfortunes as a sign that it was time to go back to a 9-to-5 and landed a job as an account manager at a digital advertising firm—but her desire to create never waned. Six years later, LeFay nabbed the last spot at New Approach School for Jewelers in nearby Arrington, quit her job, and returned to the fair and festival circuit.

In 2016, she put in an application to set up shop at The Idea Hatchery, a retail incubator offering affordable space in the hip Five Points area of East Nashville. A year later a spot opened up, and LeFay officially debuted Riveter in May 2017. 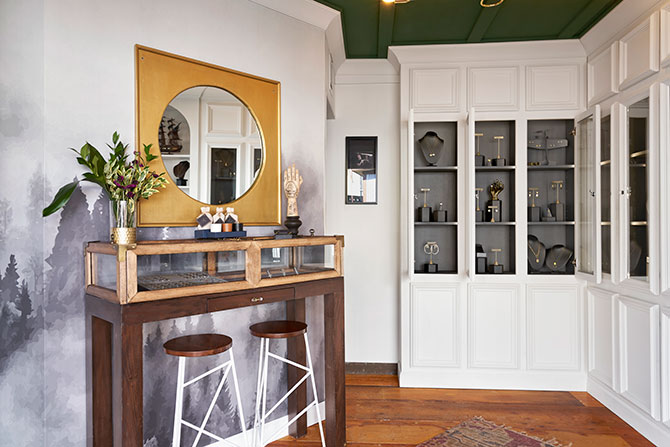 “Riveter was my first venture into retail, and size-wise, it’s not that much bigger than a craft booth,” LeFay says. “So I could see how I was going to lay everything out, run the thing, and have my workshop in the back.” The collaborative atmosphere at The Idea Hatchery is ideal: “My priorities line up with everyone in the community, and my landlords, Bret and Meg [MacFadyen], are very intentional about providing opportunity to artists.” 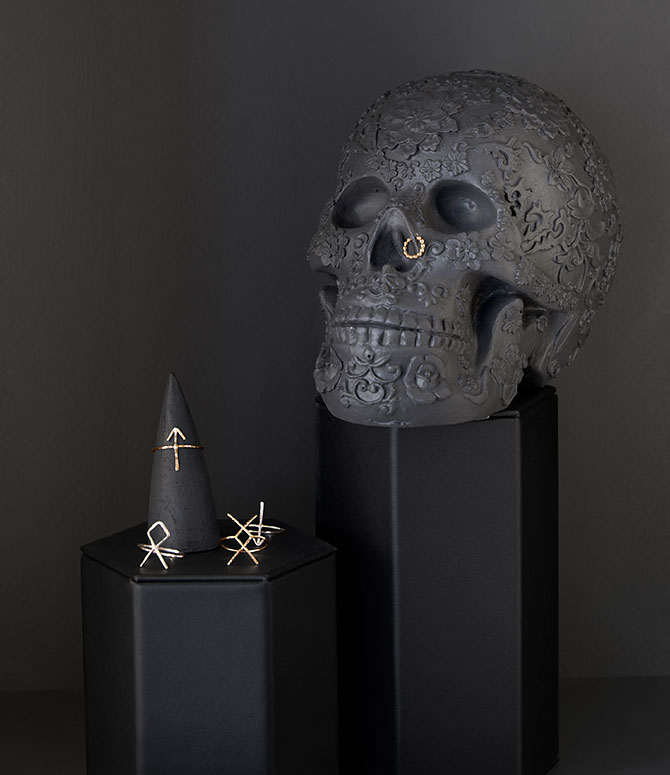 Still, having a storefront in an area of Nashville with growing foot traffic has caused LeFay to rethink her business model on several occasions—and as someone with no background in retail, she is always learning. Although local clients commission engagement rings, wedding bands, and other time-intensive custom pieces, a majority of passersby stumble into her store while touring Five Points. So LeFay makes sure to stock a selection of items ranging in price from $25 to $75, such as studs with a Nashville motif, in addition to fine jewelry that can tally anywhere from hundreds to thousands of dollars.

Heirloom reinvention—taking clients’ sentimental pieces and transforming them into something a bit more their style—is a big focus for LeFay, undoubtedly a throwback to her early days rehabbing her relatives’ gems. “The thing that appeals to me most about jewelry is that it’s incredibly personal,” she says, “and one of the only tokens of meaning you wear every day.”

She describes her own style as “unconventional,” joking that older mentors “make fun of everything I do. I heed some of their wisdom and discard some of it. There’s value in the knowledge of people who have been making jewelry for 40, 50, 60 years that I simply do not have.”

Like LeFay, most of her customers trend toward the nontraditional and like seeing imperfections, such as tool marks and wax carve lines. “One of my mentors asked, ‘Did these get run over by a truck on the way here?’ ” she says of a recent piece she was casting. She could honestly respond that the industrial look was definitely ­intentional—and appreciated by clients of Riveter. 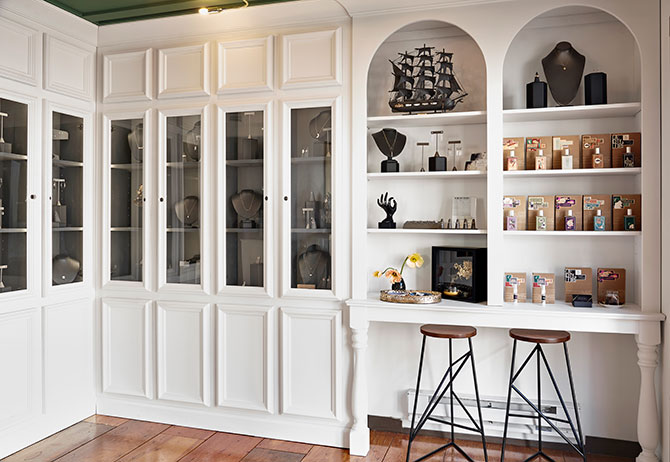