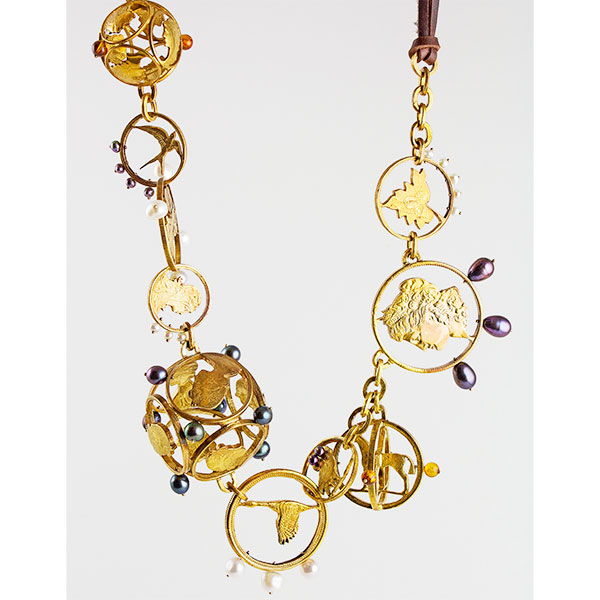 As he’s the first major designer to show during New York ­Fashion Week, all eyes are always on Tom Ford. And, boy, did he deliver for spring 2019, throwing down the gauntlet with a glamorous lineup reminiscent of his Gucci days—all slim skirts, lean gowns, and sharp blazers, a complete about-face from fall’s sparkly sweatshirts and leggings. “I became a designer because I wanted to make men and women feel more beautiful and to empower them with a feeling of confidence,” he said in the show notes. In other words: Goodbye, high-fashion streetwear. It’s time to get dressed up.

Ford wasn’t the only one who had grown tired of the casual. Marc Jacobs finished the season with a similar battle cry, albeit one heavy on the romance: high bouffants, veiled boaters, ruffles and rosettes galore. The finery followed suit: bauble earrings, glittering statement necklaces, plus a bejeweled take on that greatest of elegant signifiers, the beribboned neck scarf.

All of which should be a boon to the jewelry industry. Froth and glamour beget bijoux—and lots of it. Ralph Lauren, in a 50th-anniversary extravaganza in Central Park, had ornate chandelier and filigree styles—gemstone dazzlers rivaled only by the star power. (Oprah! Hillary Clinton!) Snow Xue Gao cast her gaze to the grande dames of ’60s Hong Kong, with pearls aplenty and mahjong tile earrings. Brandon Maxwell, meanwhile, channeled the best-dressed set in Dallas with a collection that included our ­favorite nod to the gussied-up look: a gold pendant in the shape of a lipstick case. Take that, #nomakeupmakeup.

Runways bloomed with floral jewelry too—Rebecca de Ravenel, Badgley Mischka—which plays equally well with this new mode of soft romance. Nowhere was that more apparent than at Rodarte, where every exit was an ode to special-occasion dressing and flowers found their way from the embroideries and prints to the fresh bouquets in the models’ hair. As for the accoutrements, by Maggie Schpak, designers Kate and Laura Mulleavy piled on sculptural earrings, massive starburst necklaces, and multiple armbands in the shape of flora and birds in flight. It was magical.

This brings us to NYFW’s other big theme, which swings counter to the dressed-up mindset: bohemian-style craftiness. If all that shell imagery recalls a certain hippiness, well, you’re right. Designers also explored simpler, more naive times, reviving humble techniques such as beading and crochet. The latter has an easy parallel in jewelry, with meshlike motifs coming to the fore. At Area we got fringed crystal netting layered over dresses, T-shirts, and white shirting—plus matching wide fishnet chokers. Chainwork offers a more subtle take on the look, and proved popular throughout the shows, from Dion Lee’s curb-link earrings to Escada’s hulking cable-link necklaces; both Monse and Tory Burch amusingly set their chain-link jewelry against clothes printed with…chain links. Jonathan Simkhai, for his part, went more overt—covering hoops and baubles with actual crochet.

One of the smaller trends that will develop in the seasons to come (we’re calling it now!): flat-metal jewelry. We saw it at Rodarte, with those bird-shape armbands. But it also popped up at 3.1 Phillip Lim and Hellessy (cascading earrings from abstract 2-D shapes), Tadashi Shoji (celestial disc pendants by Sequin), and Nicole Miller (nameplates), among others. Stuart Vevers at Coach 1941 mined those industrial metalworks for his Sante Fe–inspired line, with silver breastplate necklaces and forks reworked as earrings and bracelets—which, depending on your familiarity with Disney movies, could be a part of the under-the-sea trend, too.