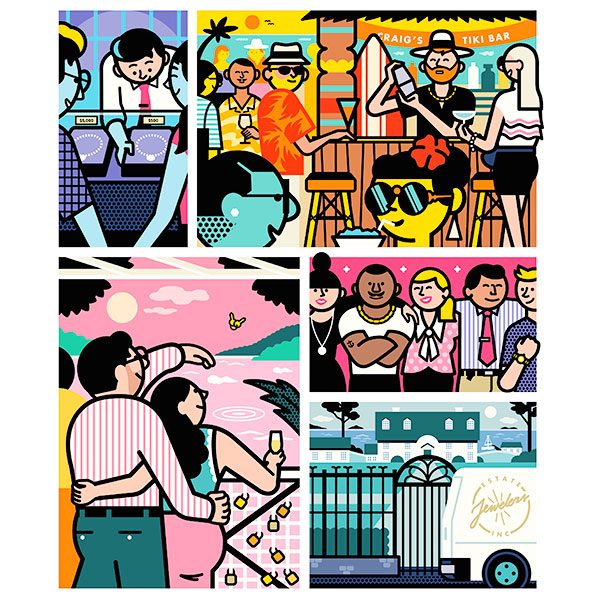 “In 2019, we had the strongest year in our history,” says Sarah Person, owner and president of 40-year-old Exclusively Diamonds in Mankato, Minn. “It’s allowed us to buy and move into a new 7,300-square-foot store, giving us more of a regional footprint.”

Greg Fakier, third-generation owner of Fakier ­Jewelers in Houma, La., says much the same thing. “This market has let us build an extensive selection of product people can touch and feel,” he says. “That’s been a real good thing. We had a 12% increase [in sales] for December.”

Top economists, however, including those at the Federal Open Market Committee of the Federal Reserve, began to raise concerns in 2019 regarding troubling economic indicators, especially the rise of short-term above longer-term interest rates, a market condition described as an “inverted yield curve.” This condition, which suggests that people believe the economy is dimmer down the road than at present, has historically been a predictor of recession.

“I’m not Chicken Little, but the next downturn is inevitable,” warns Erik Runyan, owner of Erik Runyan Jewelers in Vancouver, Wash., founded in 1917. “For those of us who lived through October and November 2008, just watching our sales volumes and the economy in general come apart, there were a lot of lessons.”

Step one when the market goes south, Person says, is to immediately intensify expense management. “We continually seek to streamline spending,” she says. “Look at everything, and consider how you could save money on each line of your expense report.”

Staffing ranks among the biggest expense lines. “Keep an eye on employee productivity,” Person says. “When someone leaves the organization, can you fill that position by dividing out their duties to the other existing staff?”

Most important of all, Person explains, is controlling owned inventory. “When the market turns, your inventory needs to change as well,” she says. “People still shop and buy. They just can’t afford to buy a $10,000 piece. That becomes a $2,000 purchase.

“Focus on ordering fast sellers, and create strong partnerships with suppliers to stock-balance aged inventory,” she adds. “If your supplier will not take back an aged piece, create a plan to either lower the price or incentivize the staff to sell it.”

Bill Craig, owner of Craig’s Fine Jewelry in Ridgefield, Conn., says his market has been in decline for several years. He attributes some of the falloff to the Tax Cuts and Jobs Act of 2017, which capped the federal itemized deduction for state income taxes at $10,000. As a result, many affluent customers in states with high personal income taxes (e.g., California and the Northeast) bought second homes in low- or no-income-tax states. Since this requires residency in those homes for more than six months of the year, many are absent during winter, resulting in lost holiday sales for jewelers.

To compensate, Craig has increased outreach substantially to capture potential local sales. “We’re concentrating much more on clienteling and producing special events to generate foot traffic,” he says. “Last January, I decided we’re going to do one or two each month. When we find new vendors, we do trunk shows. We do a private holiday party, a tiki party in the middle of summer with a truckload of sand and steel drums, and we did a buying event with an estate company. We’re sending out mailers for buying gold, and we had a refurbishing show, where people brought in their jewelry and we offered them custom design.”

The store mails event invitations to its top 500 or 2,000 customers and supplements that with substantial social media marketing, concentrating on Facebook, Instagram, and Twitter. “One event drove $40,000 on just $60 in advertising,” Craig says.

Even through the good times, hone your relationships with your staff, top clients, and key vendors, advises Olivia Cornell, president of Cornell’s Jewelers in Rochester, N.Y. “You’re going to survive on the top 20% of those relationships,” Cornell says. “In 2008 and 2009, we didn’t take salary for ourselves, so we didn’t have to lay anybody off. We were then able to work with our staff to review all of our top clients.”

The jeweler ranks customers according to their loyalty rather than how much they spend. “It’s not always based on the dollar amount,” Cornell says. “I have this one client who always comes in with a smile. She tries to come to all our events. She’s not always a big spender. But she’s special because she supports us and is excited and loyal to us.”

The store assesses its vendors similarly. Cornell says she’s learned to rely on vendors she can engage in honest, open discussions and that execute on rush deliveries, help promote the store’s collections, and return calls in a timely manner.

In 2014, when southern Louisiana suffered a deep crunch in its oil industry, Fakier Jewelers decided to up the ante. “We jumped on the opportunity to move to a big, beautiful store on a corner,” Greg Fakier says. “That created excitement. And it’s all about the experience you give the customer.”

What’s truly unique about Fakier Jewelers, however, is its wedding pergola. ­Fakier built the structure on the bayou that runs behind the store and included a fence fashioned after the tradition at the Pont des Arts bridge in Paris, where couples attach “love locks” to represent their everlasting commitments. Fakier customers receive their padlocks, install them, and cast their keys into the bayou.

“It’s become a thing,” Fakier says. “It’s truly unbelievable. Our customers just love to put their locks on there and throw away the keys.”

Compete Where You Can Win

Smart jewelers have learned it’s difficult or impossible to compete with the majors or online sellers in certain operational categories. When the market softens, says Runyan, it’s even more important for independents to focus on their core strengths.

“After sorting through what happened in 2008, my business model today is very different,” Runyan says. “I didn’t have what I’d call an estate program. Now it’s a major department for us. Estate is something a big box or online can’t do like we can. We learned how to manufacture money.

“The margins there don’t exist anywhere else in the store,” Runyan adds. “How we operate today doesn’t resemble at all what it was 15 years ago.”