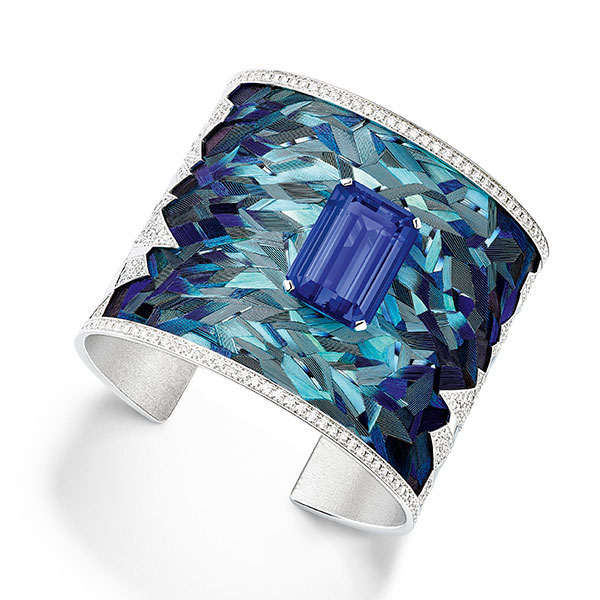 The beauty of the Far North—including the ­mythical colors of the aurora borealis—inspired Piaget’s spring 2018 high jewelry collection, Sunlight Escape. And this white gold manchette was designed to channel ­“northern, summery, endless sky into water,” says Yvonne Lynam, Piaget’s president in the Americas. Its tapestry of rich blues and greens wasn’t created with gems, but rather with colored bird feathers—achieved through feather ­marquetry, a 16th-century decorative technique that’s ­clearly ripe for revival.

The bracelet was fabricated by a team of craftspeople at Piaget’s atelier in La Côte-aux-Fées, Switzerland. “Sometimes we create a piece of jewelry around the stone; sometimes we find the stone to match the piece,” says Lynam. “In this case, the manchette was created and designed around the central sapphire.”

The piece came together as expected, Lynam says. “Feathers are a natural material, so there is always a small element of the unforeseen when the materials are composed and applied. But every step was meticulously planned and executed.”