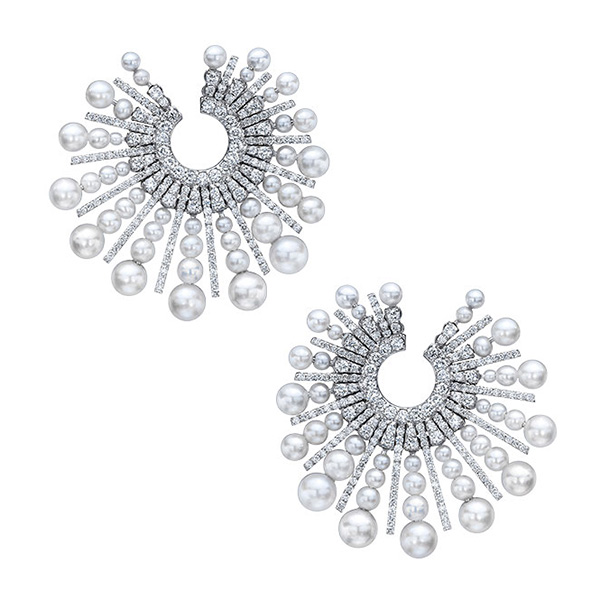 As jewelry trends come and go, pearls remain a classic. But whereas previous generations might have been inspired by Coco Chanel or Audrey Hepburn, today’s ­fashion-forward consumers are eager for bold takes that flip the script on pearls as a traditional accessory. Here you’ll find a glossary of everything you need to know about the luminous gems and today’s thriving pearl market. 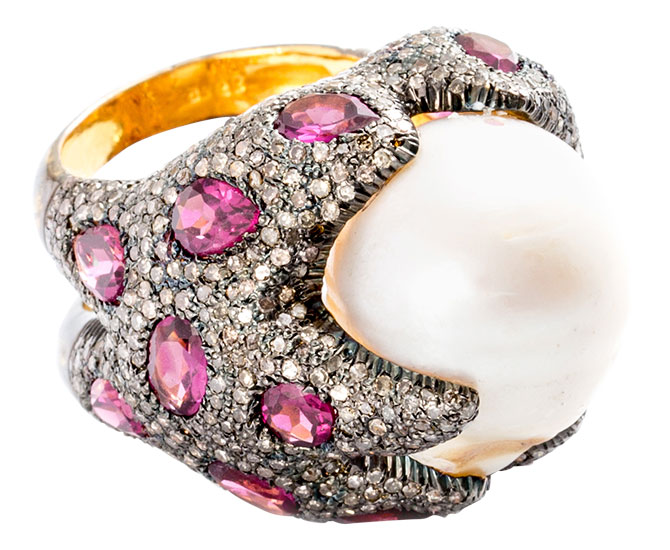 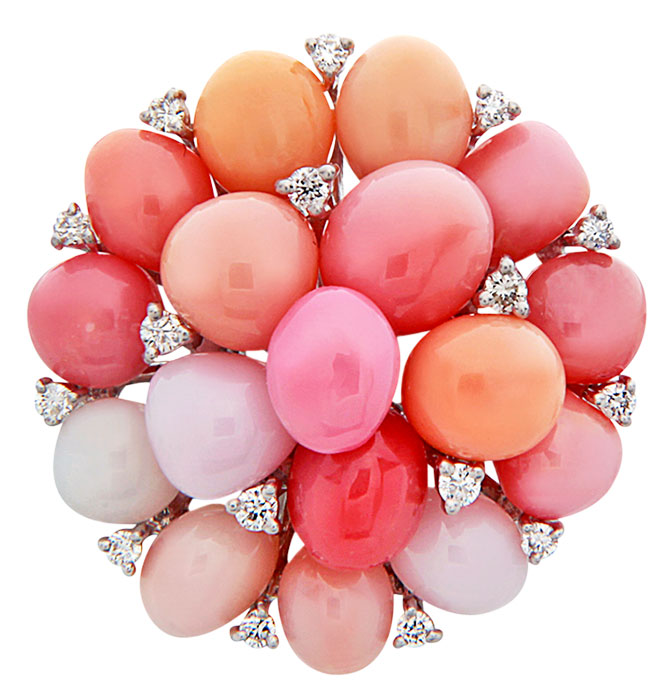 Conch pearls, the pink, non-nacreous pearls produced by the queen conch. Julia Roberts wore conch pearl earrings to the 2019 Academy Awards. They’re extremely rare, because they can’t be cultivated, and extremely -expensive. “One to 3 carats are going at wholesale for $1,500 to $2,500 per carat, 3 to 6 carats are $3,500 to $4,500 per carat,” says Ashwani K. Sethi, CEO of New York City–based Tara Pearls, adding that the very top quality can command an additional 50 percent. (Flower earrings with 38.39 cts. t.w. natural conch pearls and 0.46 ct. t.w. diamonds in 18k gold; $46,862; Tara Pearls; sales@tarapearls.com; tarapearls.com)

Designers, who have taken to incorporating pearls on the catwalk in a big way. Boldface couture brands such as Stella McCartney, Miu Miu, and Valentino have been elevating pearls to high-fashion status during New York Fashion Week runway shows.

Extreme weather, such as the typhoons that hit the pearl-producing areas of Australia—a top producer of the largest white and golden South Sea pearls—nearly five years ago, destroying many oyster beds. Because those pearls can take a number of years to grow to their top sizes, the storms are having an effect now on -availability and pricing. “There is a serious shortage of goods once you get to 16 millimeters and over,” says Gary Tarna, president of Los Angeles–based Hanadama Pearls. 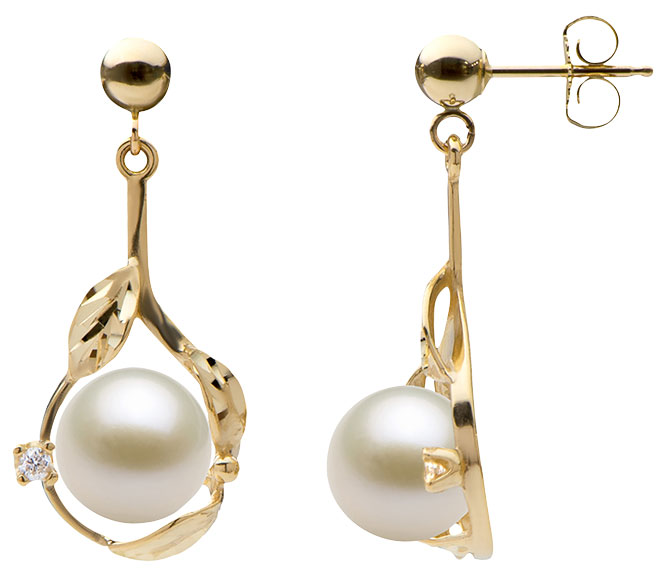 Freshwater pearls, the most inexpensive type of pearl. Cultivated in a species of freshwater mussel, not oyster, freshwaters are largely farmed in China, where robust production is meeting an increase in demand. Eddie Livi, owner of DSL Pearl, says that for high-quality freshwaters, prices tend to rise by about 5 percent on a year-over-year basis. “Demand has risen a little bit,” he says, largely because the Chinese “are buying them before they get to Hong Kong,” where they ordinarily would hit the export market. (8 mm–9 mm freshwater pearl earrings with 0.04 ct. t.w. diamonds in 14k yellow gold; $695; Maui Divers; 800-253-6016; mauidivers.com) 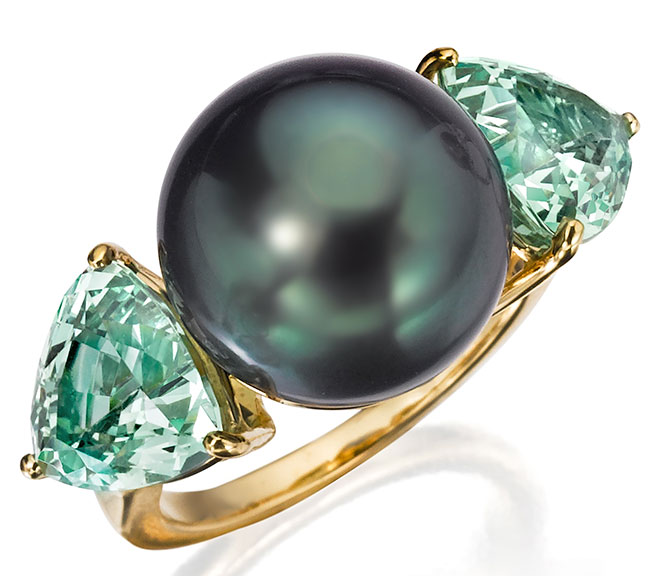 Gemstones, which designers are pairing with color-complementary pearls to bring out their varying shades, Grosz says. For instance, a Tahitian pearl with a greenish tinge might be paired with a tourmaline or a green garnet. (18k yellow gold ring with natural-color Tahitian cultured pearl and 5.73 cts. t.w. mint-green garnets; $24,800; Assael; 212-819-0060; assael.com)

Hong Kong, as in the Hong Kong International Jewellery Show, held this year for the first time in tandem with the Japan Pearl Exporters’ Association and the Japan Pearl Promotion Society. Today, Japan exports about 75 percent of its pearl production to Hong Kong, with demand fueled by growing interest among middle-class consumers in China and elsewhere in Asia.

Innovative techniques such as faceting, inlays, and other unexpected ways to slice and dice a pearl to show off its beauty. Brands such as Melanie Georgacopoulos, Samira 13, and little h all play with variations on the theme (which experts say can be an excellent way to disguise imperfections in a lovely yet flawed specimen).

Japan, the traditional producer of akoya pearls. After a period during which the Japanese ceded much of the market to Chinese competitors, pearl industry pros say the country is once again the dominant producer of in-demand akoyas.

Kuri Bay, where the modern pearl industry began, in remote Western Australia. The first farm for cultured pearls was opened in 1956 by a company run by Tokuichi Kuribayashi (for whom the bay is named). 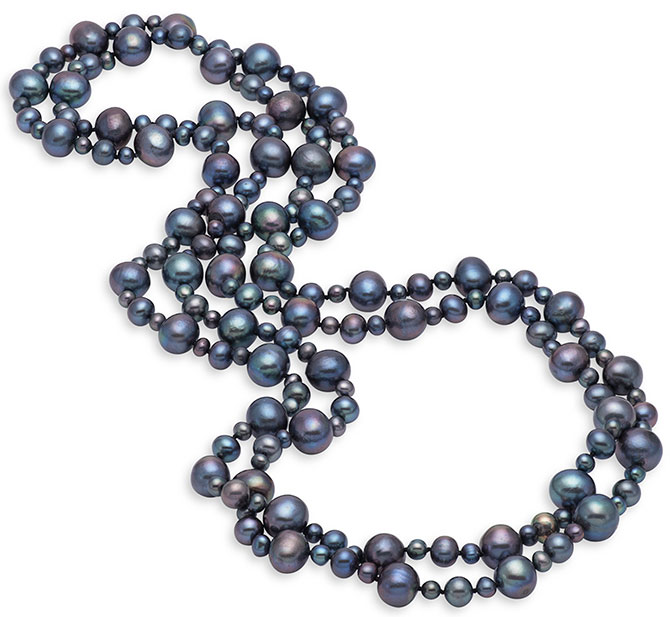 Long strands, which are an especially hot trend right now. “We’re selling a lot of long strands between 28 and 38 inches—and sometimes much longer so you can triple it around the neck,” Federer says. The extra length means versatility for -consumers seeking a piece of jewelry they can put their own stamp on. (Endless-style 54-inch strand with 4.5 mm–9.5 mm black fresh-water pearls; $275; Mastoloni; 800-347-3275; mastoloni.com) 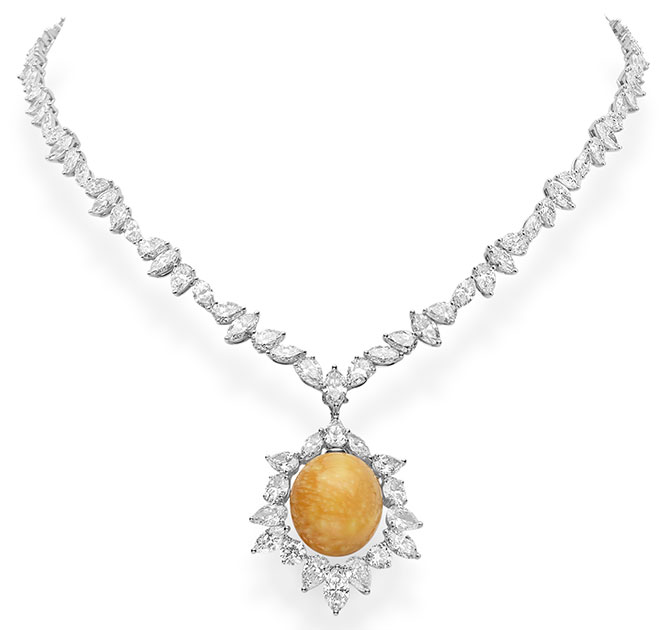 Nucleated, or how oysters are seeded to produce pearls. Freshwater pearls are usually tissue-nucleated, but a new technique pioneered by Chinese freshwater pearl producers uses beads instead. “The pearls are heavier and they’re sold by weight, and it gives you the ability to make them bigger and bigger,” says Fran Mastoloni, partner at New York City’s Mastoloni. The technique allows producers to create round freshwater pearls of much larger sizes. “They used to be 6 to 9 millimeters. Now they can go up to 15 millimeters.”

Optimism. While styles come and go, the extent to which pearls have been integrated into not only fine jewelry but also fashion jewelry and apparel gives them serious staying power. “The pendulum has swung back, and it’s important for retailers to know that something this classic is going to remain for decades,” Grosz says.

Power, as in pearls are the new jewel of choice for influential women from Washington, D.C., to Hollywood. “Women of power wear pearls.” Grosz says. “There are pearls like crazy on the 30-somethings. You’re never overdressed, and they go with everything.”

Queen Elizabeth. The British monarch is hardly what might be considered a style maven, but her love of pearls has been picked up by a new generation of British royals and made fresh again. Prince William’s wife, Kate Middleton, and Prince Harry’s wife, Meghan Markle—fashion icons for a huge number of young women—are being credited with helping to spark interest in pearls and to encourage younger women to wear them. 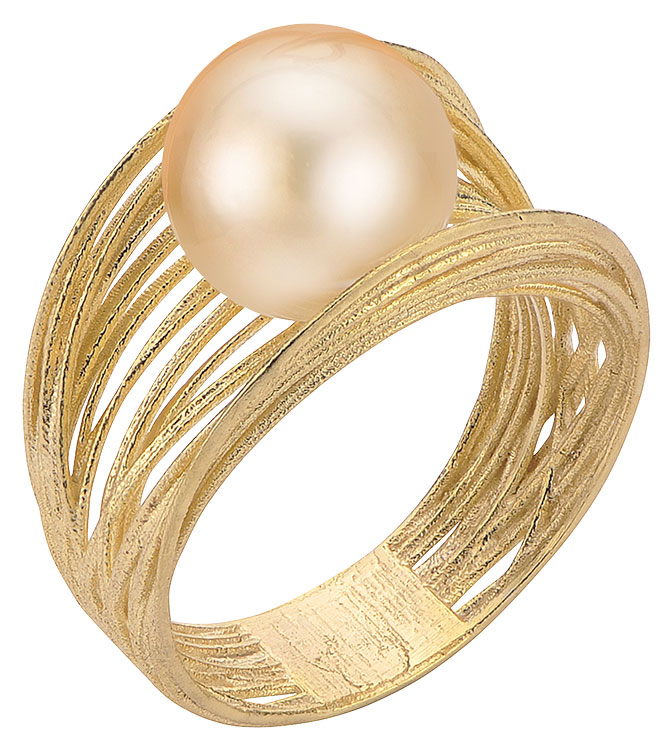 South Sea pearls. These are the ultimate pearls: the biggest, most lustrous, and most desirable. Supplies of smaller and medium pearls of both the white and golden varieties are healthy, while the runaway demand for golden pearls (which tend to be a few millimeters smaller than their white counterparts) in China has cooled a bit, bringing prices down by as much as 15 percent, according to Livi. (Silk collection 14k yellow gold ring with 10 mm–11 mm golden South Sea cultured pearl; $1,125; Imperial Pearl; kathy@imperialpearl.com; imperialpearl.com)

Tahitian pearls, which come in striking shades ranging from grays to purples to greens. When Harry and Meghan visited Fiji in October, the Duchess of Sussex was gifted a J. Hunter Pearls Fiji strand of pearls, whose rare and deeply multicolored hues caught the eyes of fashionistas worldwide. “When that happened, demand skyrocketed,” Grosz says. While the “Sussex Strand” would retail for up to $70,000, pearls from the South Pacific are available in far more democratic price points. “Other Fiji pearls can wholesale for $300 a pair. There’s a very wide range.” (India bracelet with 7 mm–8 mm Tahitian pearls in 18k white gold; $8,830; Tamara Comolli; bw@tamaracomolli.com; tamaracomolli.com)

Updo, as in the pearl-covered beehive hairstyle rapper Cardi B wore to the 2019 Grammys, giving the phrase crown jewel a whole new meaning. For more examples of ultraglam pearl hair accessories, consider Plutonia Blue’s boho-chic pearl hairpins or Ariana Grande’s Instagram selfies (where the singer braids pearls into her ’do).

Versatility. Designers are moving beyond the red carpet and runways, incorporating pearls into their collections in new and striking ways. “Life is becoming more casual,” Grosz says. “Smaller pearls are wearable”—for instance, Lizzie Fortunato’s pearl-topped hairpins—and even larger ones can be found in all kinds of accessories. 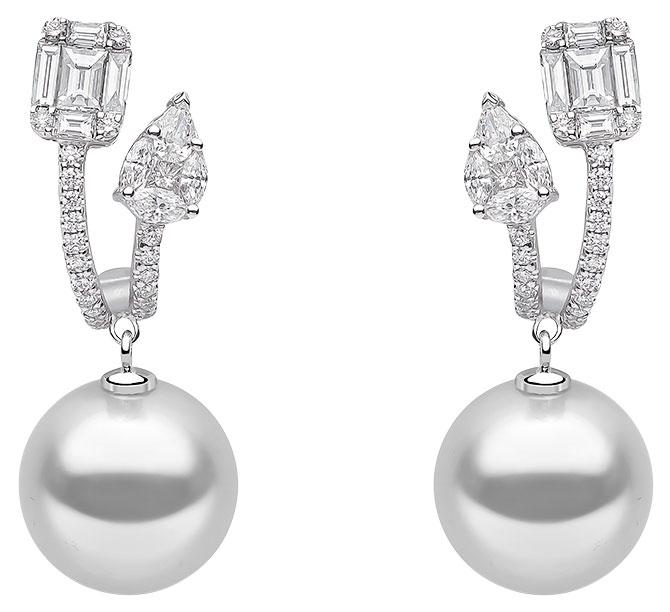 White South Sea pearls, the world’s largest, with specimens up to 20 mm. But such sizable beauties are more and more rare, Tarna says, due to growing demand and lowered production as a result of catastrophic weather events. “In white South Sea pearls, larger sizes and especially better qualities are very scarce and will probably be that way for the next year or two,” he adds. (Earrings with 12 mm–13 mm South Sea pearls and 1.3 cts. t.w. diamonds in 18k white gold; $8,000; Yoko London; 212-819-9400; yokolondon.com)

X-rays, aka microradiography. According to GIA, this is the only noninvasive way to see inside a pearl; it can be used to separate natural-color from treated-color pearls and to determine if a pearl is natural or cultured.

Generation Y, which is driving much of the interest in pearls right now. From catwalks to Instagram, there’s no shortage of platforms for showing young millennial women how to wear pearls. Plus: Pearls are an increasingly affordable luxury, thanks to the abundance of smaller specimens on the market and the willingness of customers to embrace the organic imperfection of baroque gems.