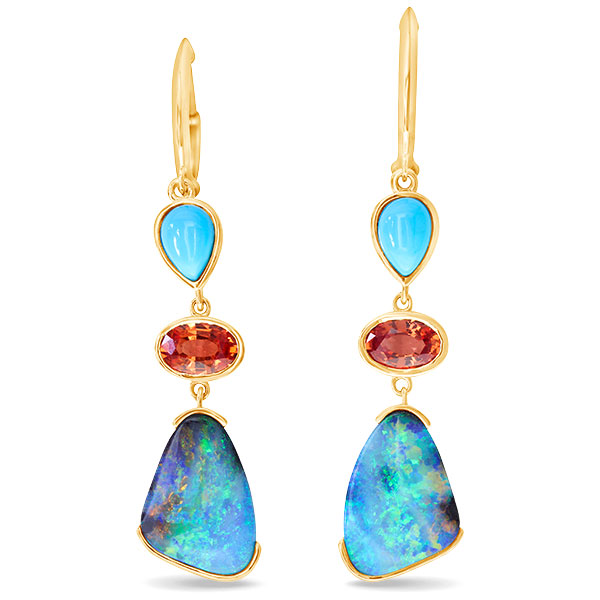 Most jewelry fanatics know Parlé Jewelry Designs for the colors it brings into the world: opals in brilliant blues and greens, garnets in reds and pinks, ­sapphires the color of the sky.

But stones and stellar jewels are only part of the Parlé story.

“I always tell everybody, this company is more than just gems,” says creative director Brecken Farnsworth, who runs the business with her husband, Jonathan. “Sure, the gems are what made us famous. But at this point there’s a whole lot of other stuff we’ve done to get where we are today.”

Parlé began where few finished jewelry companies do: in the earth.

The company originated as Idaho Opal and Gem Corp. in May 1973, and made bank mining opals. Back then, the company was owned by Frank Farnsworth, Jonathan’s dad, and he and his crew would cut and polish the rough opals, set them into simple jewelry, and sell them across the country. Stone cuts were basic and styles were predictable, because that was precisely what customers those days wanted.

Gradually, over time and out of necessity, the company branched out into different gemstones—first tanzanite, then garnets. In 1991, it became Parlé Jewelry Designs.

The name Parlé (roughly, “to speak” in French) embodies the company’s philosophy about gemstones—they always have to “speak” to the Farnsworths in terms of beauty, rarity, and value. A prime example: Sometime in the late 1990s, Frank bought a whole mine-run of Madagascar rubies, largely because he thought they were being sold at a good price. He sat on the gems for years until the U.S. government banned Burmese rubies in the mid-2000s. Suddenly value of the product from Madagascar skyrocketed. From that point forward, the company became known as a color supplier.

“It’s pretty amazing to think about how we really made a name for ourselves in the business,” Brecken says. “What we were doing was so unique; we just wanted to have what other people couldn’t get.”

At first Parlé continued to crank out its traditional designs. Then Brecken started experimenting, designing jewelry for herself. On sales trips Jonathan would show clients pictures of the pieces Brecken had created. They couldn’t buy the stuff fast enough. As Brecken became more confident in her abilities, she hit the gem archive and picked out different stones for new pieces. This commitment to innovation became a signature of the company.

Today the Idaho company has more than 5,000 accounts in the United States and Canada, and makes 70% of the jewelry it sells in the 17,000-square-foot Pocatello ­facility. Pieces range in price from $200 (in sterling silver) to $100,000 (for intricate statement pieces in gold).

Laura Barringer, senior buyer at Seattle-based Ben Bridge Jeweler, whose stores have been doing business with Parlé for more than two decades, says customer response to the brand’s pieces has grown as Brecken has varied the company’s approach. “Nobody else does opal the way she does opal,” Barringer says. “The gemstone is always the hero.”

Amy Dudzik, fine jewelry buyer at Omaha, Neb.–based Borsheims, points out the way Brecken pairs other gems with the opals—often seizing on streaks of crazy green or red colors in the main stone to pull out colors and attributes in the complementary stones. “I love that she pairs opals with aquas and peridot,” Dudzik says. “Whatever color is coming out of opal, she’ll accent that and bring it out more.”

Brecken and Jonathan are self-proclaimed gem geeks, and they not so secretly love this about each other. One day a few years ago, they wondered what would happen if they shared their love for gems and minerals with the world. That’s when the younger Farnsworths came up with their weekly podcast, Gem Junkies.

During the first few weeks, this endeavor was basically a vanity project, a way for two gemologists with made-for-radio voices to geek out about gems. But as the couple started recording episodes and subscription numbers climbed, it quickly became clear that people loved it.

The podcast morphed into a lighthearted, often educational conversation about the science, history, fashion, and marketing of gemstones and jewelry. In every 20- to 30-­minute-or-so episode, Brecken and Jonathan recruited fellow gemologists, jewelry designers, and influencers to talk about their favorite things. Memorable episode titles include “Cleopatra—Girl Loves Her Emeralds,” “Green & Hairy Grossular Garnet Gooseberry,” and “No Viagra, Just Get Fire Opal.”

“The podcast was as much a tool for promoting our nerdiness as it was for raising awareness of gemology and the wonders of gems,” Brecken says. Though the couple no longer produce the podcast weekly, it’s still a big part of the brand, with 71 episodes available on iTunes and other apps.

Parlé was lucky to weather the COVID-19 pandemic without much hardship. Still, the last year took its toll in different ways. The company shut down for about two months in March 2020. By the time Brecken and Jonathan were thinking about opening again in late May, Frank had a shocking announcement: He was retiring, effective immediately.

At first the news caught everyone off guard. The more they thought about it, however, the more Brecken and Jonathan realized the timing was perfect for such a change. Because travel had come to a halt, because nobody was jetting off on sales trips or to trade shows, they were able to focus on where they wanted to take the company when they took over.

“It really pushed us into our role as leaders,” she recalls. “Evaluating this company and saying, ‘This is our team, let’s do our best for them,’ was a really big deal.”

Part of the new plan included investing in ­infrastructure; as the pandemic stretched on, Brecken and Jonathan purchased new machines including a laser welder and laser engraver. They also bought a new back-end system and RFID technology to manage inventory.

While the company was bolstering its equipment, Brecken was dreaming up new concepts. She created a few tourmaline pieces she loves. And several of her designs won 2021 JCK Jewelers’ Choice Awards. She says she felt more creative during lockdown than she had in years.

“I was willing to take more risks because I wasn’t designing 40 pieces,” she says. “It was nice to slow down and take the time to figure out what I wanted to do with everything. It was nice to remember what that feels like.”

Looking forward, Brecken says her immediate plan is to ­focus on Montana sapphires and peacock tanzanite, ­building new and creative pieces around these two gems.

And once COVID-19 restrictions are lifted, Brecken just might dust off her passport and resume her gem-buying trips. In the past, she and Frank regularly flew to Hong Kong. After all these years, she says the hunt for stones that speak to her is still her favorite part of the design process.

“Deep down we’re all treasure hunters, and that’s the thing that gets me out of bed in the morning and brings me to the office,” Brecken says. “What we make isn’t necessary; it’s all for special memories and special moments. That means we get to be a part of people’s happiest times on Earth.”