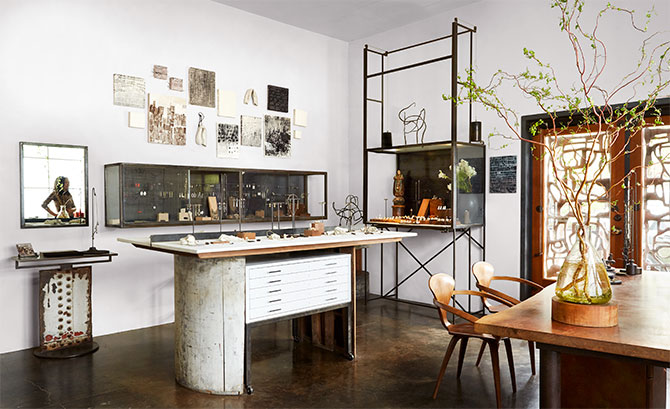 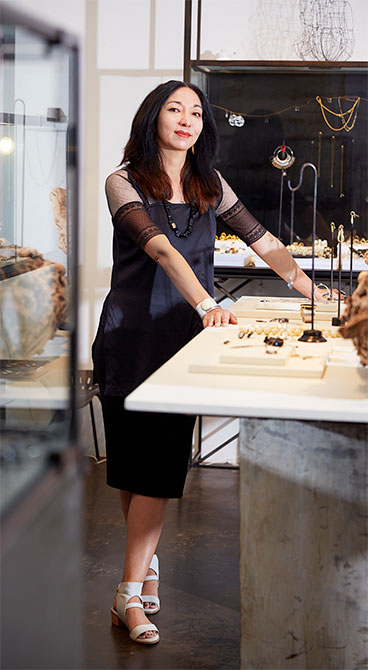 In Japanese, the word shibumi translates loosely into “effortless perfection.” That’s what April Higashi aims to accomplish at her jewelry store of the same name. The notion is, in a sense, her inspiration, her North Star. It explains why she strives to mix fine art with modern jewelry and unusual textiles, why she celebrates artists with multiple shows each year, why she has remained in one of Berkeley’s quirkiest neighborhoods for nearly 15 years. “There’s an organic quality about this place that’s still being refined,” she says. “That’s one of the things that makes it special.”

Higashi, now 51, always has been a creator. The half-Japanese Utah native came to the San Francisco Bay Area as a teenager and went to university for textiles and art. After graduation she worked various jobs in the fashion industry. Then she took a jewelry class and was hooked. Higashi started her own jewelry company with a friend, and nine months later they struck gold: a huge order from Banana Republic. ­Eventually the duo parted ways, but Higashi continued making her own stuff. Finally, in 2005, she opened the storefront on the ground floor of a two-story live/work space in West Berkeley.

The Show Must Go On

Today most of the pieces at Shibumi sit in custom steel and glass displays. Higashi’s jewelry is in a case toward the back; pieces from some of the 40 other artists she showcases are on display elsewhere around the store. But Shibumi is more than just a shop; from the beginning it has doubled as a gallery that features creative genius in sculpture, textiles, photography, enamels, and more. Higashi curates between five and seven shows a year, and each one spotlights artists whose work is complementary. One recent event combined the work of two designers who are inspired by organic forms: Nan Collymore and her one-of-a-kind textiles and Eric Silva, who works with bone and antlers from animals that have died naturally.

While new designs account for the bulk of Shibumi’s sales, Higashi has diversified with a healthy custom business, specifically redesigning, resetting, restoring, recycling, and reselling old pieces. “Someone who’s been through ­divorce might want to take a wedding ring and turn it into something else to transform her life,” Higashi says. She adds that she also works with heirlooms that ­customers want to make into new jewelry with new meaning. Overall, prices range from $250 to $15,000; a drawer in a cabinet near the front door features lower-end pieces throughout the year.

Higashi’s world is small—her home and business occupy the same two-story building across the street from an old gravel factory. The store and studio are on the ground floor; the studio is about three times the size of the storefront, and she employs three full-time goldsmiths. Upstairs, Higashi and her 9-year-old son share a 1,200-square-foot living space. “I’m never too far from my work around here,” she says. “Most of the time, that’s a great aspect of the creative life.”