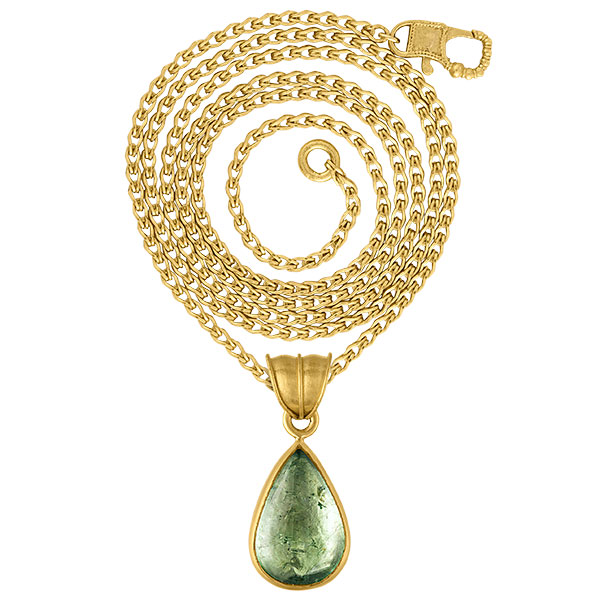 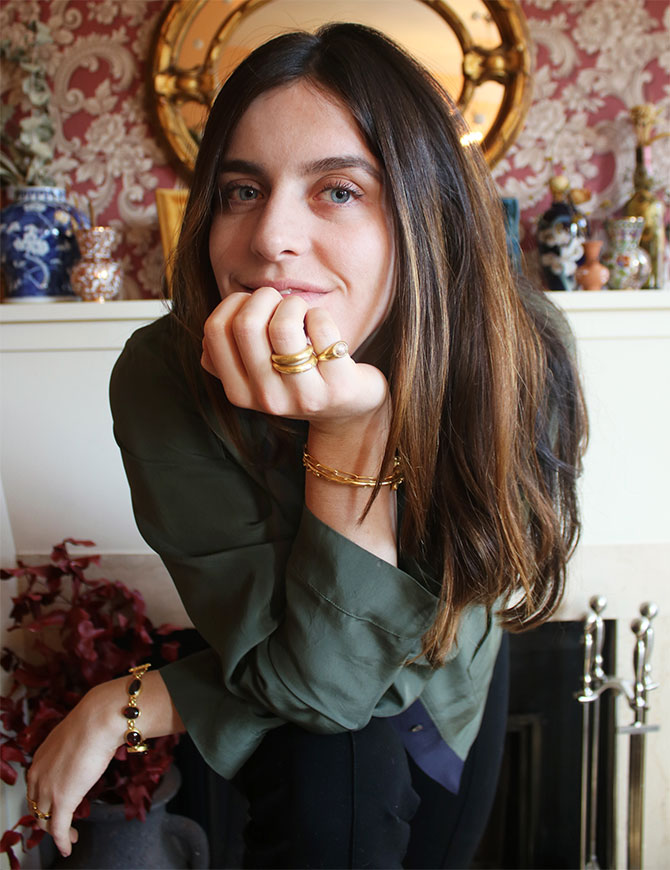 While only in her mid-20s, Jean Prounis has created a covetable gold jewelry brand using centuries-old classical techniques

In a crowded jewelry market, it isn’t easy for a new brand to attract the attention of fashion insiders. So when a 24-year-old fledgling designer gets an admiring launch article from Women’s Wear Daily, followed by features in Vogue.com and Forbes.com, it’s a good bet her line offers something fresh and exciting. In the two years since its debut, Prounis Jewelry has established itself as a collectible line of 22k gold fine jewelry in classical Greek motifs handcrafted by Jean Prounis.

The quick success of her company, which includes only one other full-time employee, delights Prounis, now 26. But it’s clear that she carefully considered her aesthetic—and the family traditions it reflects—before introducing the brand. “I worked for a year on developing the ­collection and on making sure I could articulate the inspirations behind it,” she says, seated in the small office she recently leased in New York City’s jewelry district. “I took care to achieve a strong identity before ­launching because I felt it was important in helping clients ­understand the brand.”

Prounis Jewelry’s origin story nods to the designer’s Greek heritage and the entrepreneurial strain that runs in her family—specifically, her great-grandfather Otto Prounis, who in the 1930s founded a nightclub called the Versailles across the street from the Waldorf Astoria hotel. Edith Piaf sang there, Perry Como was a regular, and the club’s sage-green tablecloths and hand-gouached menus inspired the packaging and print materials for her jewelry line. (The nightclub closed in the 1950s and the space is now a steakhouse, with a wall of Versailles memorabilia.) Jumping forward a generation, Otto’s son Nick amassed a library on ancient Greek culture, which he shared with his granddaughter. The rich gold jewelry she saw in the pages of her grandfather’s books and on display at the Metropolitan Museum of Art made a strong impression on Jean, the only child of globe-trotting parents who started successful businesses of their own in suburban Long Island.

“I grew up taking classes at FIT on the weekends and went to summer camp there when I was 11,” says Prounis, who longed to do something with her hands but couldn’t figure out what that might be. Just before entering Skidmore College as a biology major, she signed up for a class with master goldsmith Cecelia Bauer in the very building that now houses her office. “Something clicked,” she says with a huge smile. “I just fell in love.”

The ancient metalwork skills that Prounis learned under Bauer’s tutelage—granulation, soldering, stone setting, chain making, and, most crucially, working with a 22k gold alloy—meshed perfectly with her desire to create fine ­jewelry with a Greco-Roman influence. The fact that she could use responsibly sourced stones and an alloy of recycled gold mixed with fine silver and copper made her company sustainable from the start, a selling point with a clientele that skews toward self-purchasing women in their 30s and 40s.

Prounis acknowledges with a laugh that her taste in jewelry is more mature than the average millennial’s, with high-end lines such as Hemmerle, JAR, Taffin, and Sabba (created by another precocious young designer, Alessandro Sabbatini) among her favorites. “We’re a young brand, but I wanted to come off as a heritage brand,” she explains. She envisioned clients who would become collectors, moving up from “entry pieces” such as $580 Hexa granulated stud earrings to $3,800 Trade rings (stackable gold bands inspired by ancient rings used as currency) to her best-­selling one-of-a-kind Roz pinky rings centered with colorful moonstones ($2,800), tourmalines ($3,480), or sapphires ($4,360). At the high end are couture pieces featuring diamonds, star sapphires, and South Sea pearls.

“Growing up,” Prounis says, “I, of course, purchased costume jewelry, but I gravitated toward antique fine ­because it has a history and can be passed on.” After ­designing and fabricating each new piece at a bench in her sunny office, she turns to a handful of freelance ­jewelers to help fulfill orders. “It’s important to me to have my eyes on every piece,” she says of producing the line in New York City. New collections are introduced twice a year, most recently pieces featuring a Greek laurel leaf motif accented with 1940s Mediterranean coral.

The company got a huge postlaunch boost when the influential Brooklyn retailer Catbird agreed to carry the line. “That really helped grow the business,” Prounis says, and a year later, she convinced Bergdorf Goodman to host a successful trunk show. Now her list of retailers includes Bergdorf; Dover Street Market in New York and Los ­Angeles; Twist in Portland, Ore.; Reliquary in San ­Francisco; and Holly Golightly in Copenhagen, Denmark. “We’ve developed a great client base,” she says, ­estimating that 40% of her business comes through retailers and 60% from private clients who contact her via the Prounis ­website or word-of-mouth.

A “Vow” section of the site displays unisex gold wedding bands, and the company’s Instagram account shows off custom-made engagement rings with the brand’s signature handcrafted look. “I wanted to call it ‘Vow’ rather than ‘Bridal’ because not everyone is getting married traditionally,” she says. “We get [commissions] from partners coming in together looking for alternative rings, often using their own heirloom stones.” For inspiration, they need only look at the designer’s hands, which are lined with bands of all widths and designs, including one studded with garnets, a favorite gem since a family trip to Prague.

One thing you won’t see on Instagram—or even on the Prounis Jewelry website—is a photograph of Jean Prounis. Although she loves meeting clients at trunk shows and sales appointments, she has no desire to be the “face” of her product. “I wanted [the company] to be a brand, not a ­person,” she says. “I’m proud of my family and wanted to use our last name, but I want the brand to be beyond myself.” She hasn’t felt the need to post Instagram stories of scouting trips to Greece, preferring photographs of boat-shaped hoops, seeded bands, and aquamarine teardrop pendants displayed on a neutral background.

Like many ambitious young designers, Prounis envisions expanding her business into other categories, including fragrance and stationery. But for now, she is content to carve clasps based on ancient Greek fibulas or fuse tiny granules to the shank of a cabochon ring. The allure of creating matte gold jewelry that becomes polished over years of wear is especially strong. “I love 22 karat,” she declares, “the history of it, the warmth, and how it becomes part of you. It’s a record of you and your life. I think everyone should open their hearts to it.”