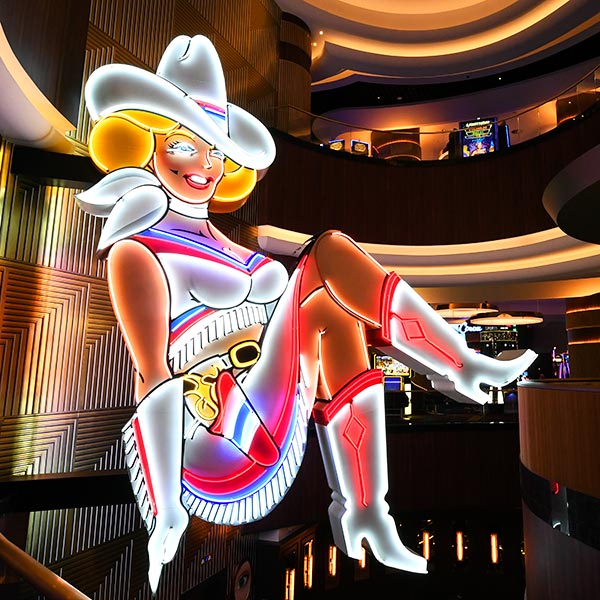 If you’re looking for us (when we’re not looking at jewelry, of course), we’ll be at one of these new hot spots

After nearly 16 months of dealing with the hardships of the COVID-19 pandemic, you might be more excited than usual for the JCK show’s return to Las Vegas.

Of course, it’ll be inspiring to see all the new products and designs the industry has assembled while engaged in quarantine and social distancing. But…Dinners! Drinking! Dispensaries! Experiencing these things by yourself would be reason enough to let loose. Doing them with colleagues—now, that’s cause for real celebration.

Luckily, during the pandemic, Las Vegas rolled out a bunch of new spots worth exploring.

Believe it or not, three new casino resorts have opened in Sin City since March 2020. The newest: Resorts World Las Vegas, which is a short walk (or a slightly longer rideshare) from The Venetian Resort and the Sands Expo and Convention Center, where the JCK and Luxury shows will be happening; it’s the first new casino resort on the Strip since Aria debuted at City Center in 2009.

Resorts World is owned by Malaysia-based Genting Group. The entire resort has a definite Asian vibe.

The food court, Famous Foods Street Eats (FFSE), was inspired by hawker centers in Singapore and features 16 food stalls from top chefs and restaurateurs. On the list of chefs: Vegas’ James Trees, who will run a mozzarella-and-burrata bar, and Ah Guan, who will re-create a Singaporean-style charcoal-fired noodle bar.

Elsewhere, Resorts World will welcome Wally’s Wine & Spirits, a beloved wine bar from Los Angeles renowned for its massive selection (more than 100 choices!) of wines by the glass.

In case you’re wondering, the casino at Resorts World looks like it will be swanky, too, but we’re much more excited about the food.

Off the Strip, Circa Resort & Casino, the first new resort in downtown Las Vegas in 40 years, revolves around the biggest (and perhaps fanciest) sportsbook in town, making it a spectacular place to go and watch (or bet on) a game.

This resort opened in December 2020, and the rooftop bar, the Legacy Club, quickly established itself as a great new spot to grab a cocktail and watch the sunset.

As you stroll through the gambling floor at Circa, be sure to look out for Vegas Vickie, the 25-foot-tall neon cowgirl who famously beckoned visitors to the Girls of Glitter Gulch strip club. Vickie now adorns an expansive wall near the hotel lobby—and her motorized leg still “kicks.”

Without question, the most creative new attraction to open in Las Vegas in the last year is AREA15, an experiential entertainment district on the west side of Interstate 15 that features live events, monumental art installations, extraordinary design elements, immersive technology, retail, bars, eateries, and more. AREA15 opened in September but welcomed its most high-profile tenant in February when arts and entertainment firm Meow Wolf launched Omega Mart.

Describing Omega Mart as “performance art” doesn’t really do it justice. Think of it as a wacky shopping trip that is one part art gallery, one part theater, and one part vision quest. The experience will make you laugh, cringe, and maybe even scream with delight. It also may leave you feeling like a character from Alice in Wonderland.

Another sight to behold: Allegiant Stadium, the new home of the Las Vegas Raiders. While there won’t be football going on during the JCK show, the stadium is expected to open up this summer for tours. Considering the engineering behind the rollaway grass field and the swanky high-roller boxes that ring the stadium, it might be worth a gander.

Also, consider making time to check out the ever-growing Planet 13 cannabis dispensary behind Fashion Show Mall. Not only does the joint (see what we did there?) have hundreds of different edibles, flowers, oils, and pre-rolls, but it also has a host of kinetic sculptures and interactive LED light displays that are particularly funky after you’ve bought and tried the merchandise.

At The Venetian Resort

For those who’d rather not wander too far from home, there are plenty of things to do and see just minutes away from JCK.

No. 1 on the list: Estiatorio Milos, which recently moved from the Cosmopolitan to The Venetian’s Restaurant Row. When you dine here, you pick out your fish in a marketplace-type setting; then the chefs cook it up for you in the kitchen. (No, the experience isn’t cheap; depending on the fish you select, it can be quite spendy. One tip: Ask what the “weighed” portion of your order will cost.) In terms of what to order, the carabinero prawns are almost always a hit, and you never can go wrong with langoustines. Even if you don’t like courgettes, try the stack of fried zucchini and get the Instagram filters ready.

Another relative newcomer: Brera Osteria, which opened in February. The restaurant sits on the resort’s replica of St. Mark’s Square and delivers an Italian vibe with an aperitivo hour, the Italian equivalent to Americans’ happy hour. In Italy’s restaurants and bars, aperitivo hours usually include free food with drinks; at Brera, most drinks—including the stellar spritzes—and pizzas are 50% off.

Among the other standout restaurants at The Venetian Resort: David Chang’s Majordōmo, where the family-style smoked whole-plate short ribs come with beef rice and ssamjang, and Smith & Wollensky, the legendary ­steakhouse that opened inside The Venetian in May 2019.

The resort isn’t known only for food; it’s renowned for drinks, too. Mixologists at the Cocktail Collective, a trio of bars at the resort, have devised a cocktail program that comprises 12 drinks dedicated to signs of the zodiac. When you visit The Dorsey, Rosina, or Electra on your birthday, you get a 50% discount on your first zodiac cocktail. If you’re a Virgo (Aug. 23–Sept. 22) celebrating at JCK, your drink is a French-inspired spin on a sour, mixing Calvados, Bénédictine, lemon, honey, and cinnamon-topped apple slices. The zodiac concoction for Scorpios—like this writer—incorporates rye, Jamaican rum, Amaro CioCiaro, Carpano Antica, two dashes of absinthe, and a maraschino cherry.

Setting aside spa time is always a good idea when traveling for work, and The Venetian’s Canyon Ranch spa is second to none. In addition to cardio equipment,  Pelotons, and Pilates and yoga classes, the fitness center features a 40-foot climbing wall, without question the largest resort wall in all of Las Vegas.

Finally, for a dose of irreverent fun, check out Atomic Saloon Show, the latest from Spiegelworld (the minds behind Absinthe and Opium). The 21-and-over show takes audiences on a rollicking and sexually suggestive trip to Madame Boozy Skunkton’s version of the Wild West—a version in which few of the cast members wear shirts.

For some, this may play out like a typical night in Las Vegas. For others, the action conjures a world you likely won’t forget—at least not until next year.