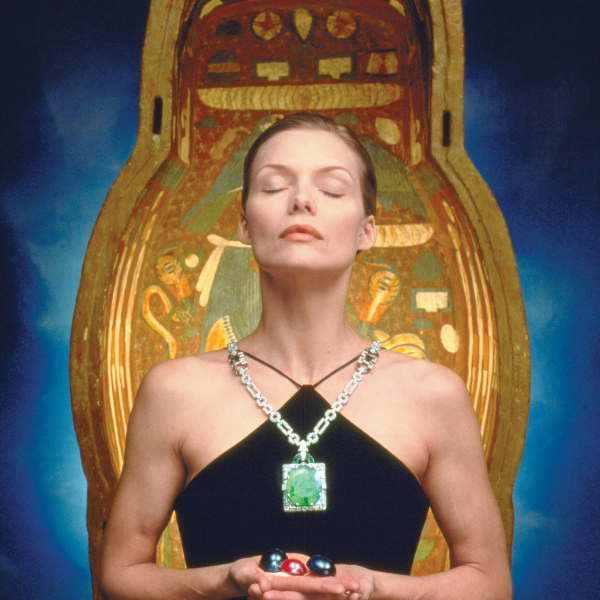 The Hope Diamond may be the most famous gem at the Smithsonian, but it’s by no means the only gobstopper on display at the Museum of Natural History in Washington, D.C. Even larger—and arguably even more beautiful—is the Mackay Emerald necklace, gifted to the institution by Anna Case Mackay in 1984. Originally mined in Muzo, Colombia, the center stone made its way to Europe and to the design studios at Cartier, which transformed it into an Art Deco masterpiece set in platinum with 35 emeralds and 2,191 colorless round brilliant and step-cut diamonds. The necklace would be a wedding gift in 1931 from Clarence Mackay to his wife, Anna Case, a former prima donna in the New York Metropolitan Opera.

In 1995, a Life magazine spread displayed the stunner on another diva, Michelle Pfeiffer (pictured), in front of a mummy case at the Smithsonian. “The whole project was amazing,” remembers photographer Joe McNally. “I had access to the entire gem collection. And Michelle was sublime. She could change her look, her character, with the simple lift of an eyebrow. I was allowed to rummage through the halls of the basements of the Smithsonian, and pick out props and pieces that weren’t on display. It was one of the more involved, educational, and revealing shoots I have ever done.”