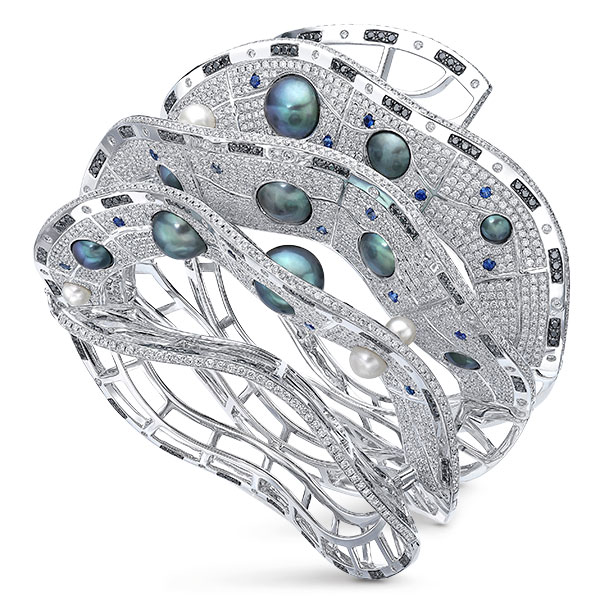 Jade, pearls, and 24k gold are a few of Hong Kong’s biggest jewelry exports. But many of the 53,000 attendees who flocked to this year’s Hong Kong International ­Jewellery Show, held March 1–5 at the Hong Kong Convention and Exhibition Centre and sponsored by the Hong Kong Trade Development Council (HKTDC), were on the hunt for something more elusive: innovative design.

And the fair delivered on that front.

“People come to Hong Kong looking for something they’ve never seen before,” said designer Anita So, founder of Hong Kong–based Osatina Jewellery Co., who debuted a collection of unique titanium-and-carved-jade pieces at the fair to meet that demand. ­“Titanium feels really new for buyers.”

Jacky Lam, marketing director for Hong Kong–based fine jewelry brand Peter Lam, which has transitioned in recent years from a mostly bridal line to a fine fashion collection with a tightly curated bridal selection, said the “whole vibe” of what buyers are looking for has changed in the past few years. “Everyone was buying classics for the longest time,” he said, “but now buyers want color and new designs—something different.”

Despite the show’s overall upbeat spirit, many vendors noted that China’s economic slowdown was affecting show traffic (and spending) negatively. According to China’s National Bureau of Statistics, the slower economy has resulted in a decline in demand for jewelry in the country.

But Hong Kong in particular saw a 44 percent growth in jewelry sales in 2017, according to the HKTDC. And business was positively booming in several corners of the show.

The Japan Pavilion was so jam-packed with buyers writing orders, it was difficult to maneuver in the space. Several American exhibitors at the Antique & Vintage Jewellery Galleria also reported robust sales. “It’s been really good so far—we’ve been doing very well,” said Natalie Bos Betteridge of Greenwich, Conn.–based Betteridge, on the third day of the show. “It’s a whole different clientele in Hong Kong. The tastes and interests can be totally different.”

Kent Wong, chairman of the HKTDC Jewellery ­Advisory Committee, said design innovation has “lifted” the territory’s profile in the jewelry world, and commented that the relative stability of the U.S. economy is helping drive the local market.

“Hong Kong is an important gateway from the West to the East,” Wong said. “And the industry here remains optimistic.”