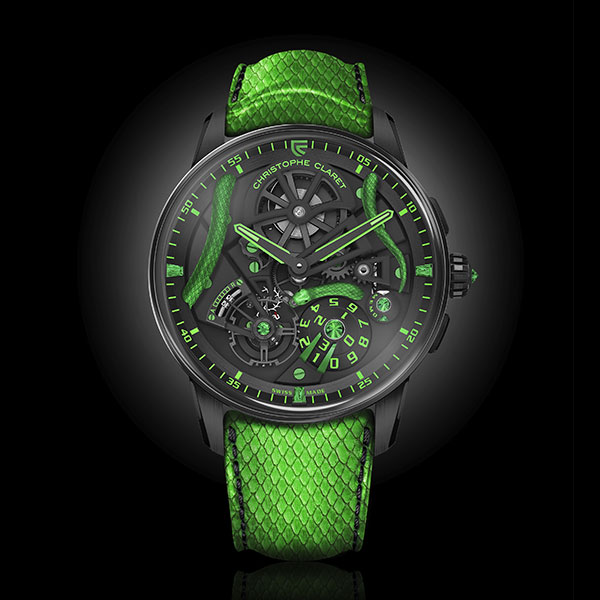 Snakes on a gear train! For his newest creation, the Maestro Mamba, Swiss watchmaker Christophe Claret says he “thought it would be interesting to give the illusion that a mamba, one of the most dangerous snakes in the world, is moving inside the watch.” The 3D serpent slithers around the movement, which contains another surprising feature, a function to help wearers remember something important, “whether it’s a cue to pay a daily compliment to a loved one, meditate for 10 minutes, do a good deed, avoid a trap, or”—appropriately enough—“avert a danger.”

Enclosed in a 42 mm black PVD-treated titanium case, the lifelike mini-mamba “creates a powerful contrast between the green brilliancy of its body and the matte black shade of the movement,” Claret says. The watch comes on—what else?—a green mamba snakeskin strap that the watchmaker says was “very complex” to acquire.

The hand-wound timepiece, whose open-work dial offers a view of its stepped and skeletonized Charles X–style bridges (a Christophe Claret signature), is available in a limited edition of 28 pieces. It retails for 96,000 Swiss francs (about $98,500).

Claret has placed the mechanical reminder function, which he calls MEMO, between the 3 and 4 o’clock indicators. “In the initial position, a tsavorite appears at 6 o’clock on the side face of the MEMO,” Claret explains. “Once the objective has been met, a simple press on the pusher at 2 o’clock pivots the MEMO function, which will display a diamond on its side face at 6 o’clock, instead of the tsavorite. The MEMO will return to its initial position each night in a 20-minute process driven by a semi-instantaneous jump system.”