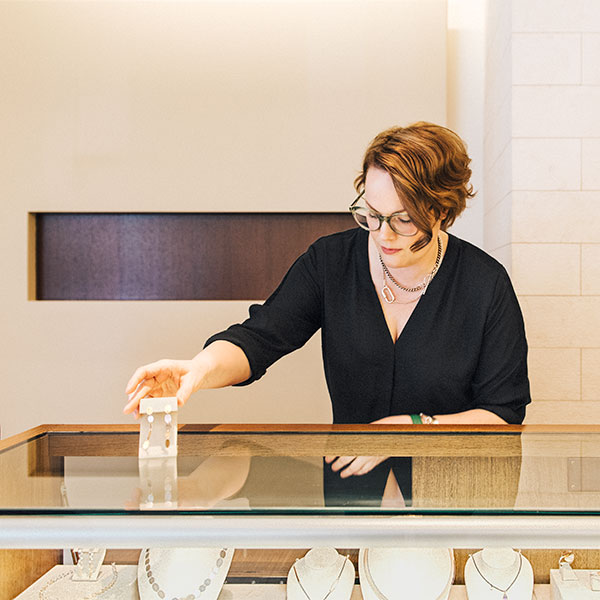 Our reporter spent a Saturday in April shadowing the pros at I. Gorman Jewelers in Washington, D.C. Here’s what she learned about luxury retailing in the age of smartphones and social media.

“Whatever I get, it needs to be something I can wear to the gym,” says a woman dressed in upscale yoga wear as she tries an eternity band set with truly gargantuan ­baguette-cut diamonds on for size.

Standing a few feet away is Adam Gorman, co-owner of fine jewelry store I. Gorman in Washington, D.C. “I get it,” he says, smiling and giving his client, who happens to be a cast member of the Bravo TV series The Real Housewives of Potomac, plenty of space to contemplate whether the gleaming ring is gym-ready.

The pair have been moving around the store—the ­client trying on styles while they catch up on their respective kids and family lives—for almost two hours. She has a multi-carat solitaire engagement ring, but is looking for something less blingy to wear every day. She and Adam end up taking a snapshot of the ring on her finger, which the retailer will send to her husband with a nice note later (her idea).

It’s a Saturday morning in April and I’m trailing behind them, observing the transaction (which could hardly feel less transactional) from a few feet away. Adam and his sister, co-owner Nicole Gorman-Shrum, have graciously allowed me to hang out in their store, one of the city’s most enduring and well-respected fine jewelry boutiques.

A week before, I’d pitched them the idea: I’m a longtime retail reporter and editor (before joining the staff of JCK seven years ago, I wrote for the Los Angeles Times and WWD), and even though my real-life retail experience doesn’t extend beyond a part-time music store job in high school, would it be possible for me to linger in your store one day soon? Incredibly, they said yes.

The very next Saturday I find myself standing next to Adam—a key to the store’s cases dangling from a bungee cord on my wrist—as the first customers of the day trickle in. The very first, his TV star client, walks in with the siblings’ mother, Bonnie Gorman, who founded the company with her husband, Ivan, in 1981. (Bonnie still works in the store part-time, and Ivan works from home.)

I. Gorman’s longtime manager, Jill Alexander, invites the second customer, a young guy wearing a hesitant expression, to sit down at the engagement ring bar, which is stocked with stylish options from Single Stone and Todd Reed, among other brands. He’s hoping to surprise his girlfriend with the ring, but isn’t sure if she wants a three-stone style or a classic solitaire—he’s considering bringing her sister in on the hunt.

Jill, who is soft-spoken and infinitely patient, backs that idea heartily: “In the end,” she tells him, “it’s really about the ring she’s been dreaming about, the one in her head that she always sees.”

The client is far more jazzed to look at diamonds, and Jill spends quality time teaching him how to use a loupe to identify characteristics and spot inclusions. Roughly 15 minutes into this, the client—loupe still held up to his eye—chuckles and says, “I’m sorry I’m taking so long, this is just completely fascinating to me.” Jill mirrors his excitement by going into further detail on inclusions—how they form and how they affect a diamond’s grade.

Pleasant exchanges like these happen all morning—some result in sales, others don’t. But watching how relaxed Jill, Adam, and Nicole are with clients, I’m reminded of the ­adage “Hold on tightly, let go lightly.” When the three ­jewelry pros are working with a client one-on-one, they’re completely locked into the person they’re helping.

And that investment of time is made again and again—­regardless of whether the customer is ready to buy. Critically, the hard sell doesn’t exist here. “We do not, under any circumstances, pressure customers,” says Nicole. “I tell all our employees that we’re not that kind of store.”

When shoppers are ready to leave, the farewells are short and sweet—the opposite of the clichéd, frenzied “Let me show you one more thing!” retail tactic that puts modern consumers on edge.

Take It From the Pros…

I’ve heard time and again from fine jewelry retailers that ­“relationships are everything.” But after spending a day in a successful family-owned jewelry store, I only now comprehend how true that is.

Fine jewelry is seldom an impulse buy. And it can take several “touches” on the part of a retailer to seal a deal on a higher-end jewel. Jill, for example, spent more than an hour looking at rings and diamonds with the young groom-to-be—and though he didn’t buy that day, he left with a plan for how to choose the “perfect” ring. I can’t imagine he won’t be back for round two. But even if he were to ultimately buy a ring somewhere else, or online, his opinion of the store and Jill would still be sterling.

In the age of Yelp reviews and armchair social media criticism, favorable opinions are the fuel that feeds word-of-mouth marketing. Without them, a retailer withers.

“This business is really about nurturing relationships,” Adam says. “We have to create moments for people when they come in. And when we can build a personal relationship, there’s value there for everyone.”

My experience at I. Gorman, brief as it was, also underscored the importance of smart buying and merchandising. The maze of cases in the shop spotlights an impressively wide selection of jewelry—both on the bridal side and in fine fashion, a category that’s long been one of I. Gorman’s calling cards. The Real Housewife was able to spend so much time at the store because the store stocks an abundance of desirable rings, in varied styles. The baguette-wrapped eternity band she was contemplating sits in a case with a few similarly dazzling bands.

“Does anyone actually buy those?” I asked Adam minutes after the store had opened, mesmerized by the display of high caratage. “Not yet,” he said, “but someone will, and we have to have them when they come in.” Less than 15 minutes later, just such a shopper walked through the front door. (The retailers also recently loaded up on stacking rings that feature curves and kinks, because “when women start asking for that trend, and they will soon, we have to have it,” Adam explains.)

The importance of keeping cases filled with on-trend, covetable jewelry cannot be overstated—provided the ­pieces are merchandised in ways that delight a wide range of consumers, from Pinterest-perusing millennials to 60-something self-purchasing women. Without the right merchandise mix, it would be easy to flounder in this business, I think, as Nicole pulls out several innovative and exciting styles for me to play with—Mattia Cielo’s innovative Flex diamond bracelets and a stunning long diamond and pearl necklace from Dana Kellin among them.

I. Gorman’s approach to jewelry retailing recognizes that many of today’s consumers no longer rely on their local ­retailer to introduce them to what’s new. While that shopper certainly still exists, younger shoppers tend to walk into brick-and-mortar stores already knowing what they want, having preshopped online. If you have what they’re after—and are then able to inject fun and friendliness into their buying experience, as I. Gorman does—I can say with confidence that you’re bound for greatness.