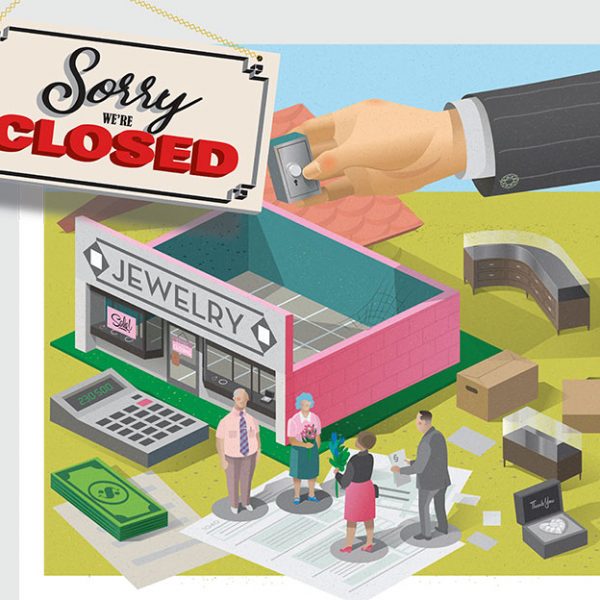 Jim Jessop has been selling fine jewelry for 45 years, but in the not-too-distant future, he plans to spend time on his boat, buy a home in the mountains, and enjoy a monthlong vacation in France.

Jessop is retiring at age 65, but his three sons aren’t interested in taking over his 126-year-old business, Jessop’s, in San Diego. So he’s closing it for good.

Like starting a business, ­closing one—particularly one as old as Jessop’s—takes a lot of work and careful planning.

“Ideally, you have a wind-down plan,” says Michael Levin, associate professor of marketing and chair at Otterbein University in Westerville, Ohio. “Anticipating closing your store three to four years out is the best idea, so you can prepare. It’s not something you should do two months out.”

Sell While You Can

Jessop started thinking about shutting down eight years ago. He was resistant to selling the firm because so many of his customers were people he’d known and brought into the business personally. Instead, he ran a 90-day closing sale, which concluded in February and sold around 90 percent of his stock, exceeding his expectations by 70 percent. He hired national jewelry liquidator Wilkerson to run his sale and spent about $100,000 to advertise it.

While a closing sale is the best way to dispose of inventory, Levin says, you must approach such a sale with care. Be sure to consider how long it takes to sell things, and don’t buy too much leading up to your closure. Let your best customers know your plans in advance, he adds, so they can place early-bird orders.

After 51 years of running Duncan & Boyd Jewelers in Amarillo, Texas, Ron Boyd is also poised to retire, citing his daughter’s recent breast cancer diagnosis, high overhead, and his age (74) as factors in his decision to shut down.

At press time, Boyd was preparing to shutter his store in mid-May, having decided to do so eight months prior. He began a very successful 28-day sale in April. He also relied on Wilkerson, which allowed him to make house calls when necessary, because Wilkerson employees were running the store.

Boyd says he did about a year’s worth of business in the three or four months leading up to the close because he kept his cases full of best sellers. “You have to keep traffic coming in because people want to buy something just because you’ve been here so long,” he says. All the new merchandise he carried during the sale came in on consignment, so his suppliers took back anything unsold.

Phyllis Gunther also favored the closing-sale approach. She ran a half-price special before she closed Yogo Sapphire Jewelry in Great Falls, Mont., in April, and her granddaughter plans to sell leftover merchandise through an online store.

Gunther advertised the sale on a sandwich board positioned outside the store but was reluctant to place advertisements to announce it because of the cost. “I’m trying to close smart,” she says. “People say it doesn’t do much good to stay open beyond a month of a sale.”

Levin, however, suggests that six months is the longest a store should remain open after its closure is announced.

Beyond a sale, there are numerous loose ends to tie up when closing a business. Make sure you have enough cash on hand to pay your creditors and avoid going into bankruptcy, ­advises Levin. And, he adds, expect your credit terms to change and become more stringent.

Jessop says the paperwork involved in closing the store has also been time-consuming, and involves organizing IRS filings, sales records, and sales documents.

Karen Capestrain closed Capestrain Jewelers, a 62-year-old business in Canton, Ohio, in March. Over 29 years, she had watched business inexorably slide downhill as the town “becomes more desperate,” she says.

Once she made her ­decision, she notified her attorney, who will close down the name of the ­business so it’s no ­longer an operating entity. Meanwhile, Capestrain’s accountant helped her close her business accounts and take care of the financials and the practicalities. She paid herself and her ­employees one last time, sent back her credit card machine, turned off the phone lines and alarm ­systems, and put everything in the building up for sale via a newspaper advertisement. She also contacted everyone she knew to promote the final sale. Anything remaining she gave to Habitat for Humanity.

It may sound obvious, but don’t forget to tell your landlord you’re closing up shop. Likewise, inform your local business ­authorities, such as the Chamber of Commerce, of your plans to shut down. And, last but not least, remember to pay your final business taxes.

One of the hardest parts of closing a business is dealing with the effect your decision will have on your employees—and yourself. The people who work for you are losing their jobs and benefits, and you are bidding farewell to your profession and an accustomed way of life.

Jessop announced his closure to staff and offered them severance packages and bonuses based on what they sold during the sale “so there was an advantage to staying until we closed.” He also offered an additional three months of health care coverage and has had retirement plans running for years. “I want to make sure everyone is properly taken care of,” he says.

To announce the closure of Duncan & Boyd, Ron Boyd sent a letter to his best customers and threw a going-away party. He informed staff two days before the sale started and presented them with a lucrative proposition: $12,000 to each employee who promised to stick around through the end of the sale. All of them stayed.

And then there’s taking care of yourself. Your business is like a child, and you’ll likely miss not just the daily routine but also your employees, your customers, and, most of all, the sense of purpose that comes with running your own business.

“Treat the end of your business like a death and grieve for it,” advises Levin. And beyond that, he suggests, make plans for how you’ll keep busy after your retirement.