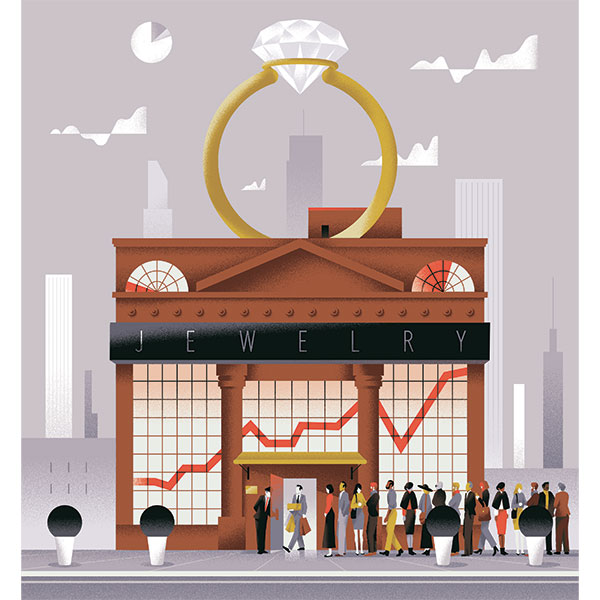 The cost of cash is up, and jewelers need to adjust.

The Federal Open Market Committee of the Federal Reserve System determines monetary policy to regulate the economy by adjusting its benchmark federal funds rate, which influences interest rates on all types of loans and borrowing for small businesses and consumers, among others. And while the Fed has decided to “adopt patience” toward further rate increases through the remainder of the year, it has lifted them by a quarter percent nine times in its current adjustment cycle, effectively raising the fed funds rate from 0 to 2.5 percent.

For jewelers who haven’t been vigilant, that’s bleeding the bottom line throughout operations, from sourcing to selling.

“People may think, ‘It’s only a couple percent,’ but interest rates have impact across everything we do,” says Abe Sherman, CEO of Buyers Intelligence Group, a Napa, Calif.–based jewelry consultant. “In an industry where net operating income is low, each tick interest rates go up erodes profit. If borrowing costs you a couple extra points, it can erase 10 percent of the bottom line.”

Jewelers obtain financing from their lenders in the form of either revolving lines of credit or term loans, both of which are frequently based on the prime rate, normally set 3 percent above the fed funds rate. So while an individual jeweler’s interest rate depends upon the company’s strength, the cost of borrowing is rising across the board.

“We have a revolving account with a fluctuating rate,” explains John Hayes, owner of Goodman’s Jewelers in Madison, Wis. “In the past two years, we’ve only used the line twice, and there was a noticeable difference.”

Term loans can come with fixed or variable rates and vary in the life of the loan from mid- to longer-term. But they’re rising too.

“An even bigger hit can come from a long-term perspective, the three- to 10-year note people would take out for moving to a new location, doing a renovation of their store, making a capital investment, or adding a substantial new line,” says Larry Rickert, president of Jim Kryshak Jewelers in Wausau, Wis. “Servicing that debt can easily become a larger dollar amount over a longer period of time.”

And rates are likely to go even higher.

“We’re still at historically low levels,” says Michael Pollak, founder and CEO of seven-location Hyde Park Jewelers, headquartered in Denver. “They could easily bump up even another 100 basis points over the next year or two.”

Among the biggest potential pitfalls for jewelers in this new higher-rate environment is overleveraging owned inventory as collateral to secure asset-based financing.

“The cost of money has an incredible impact on the carrying cost for inventory,” says David Stone, co-owner of Nancy and David Fine Jewels in Millburn, N.J. “We’ve gotten to where I don’t want to carry the debt. What we buy we pay for.”

Explains Sherman: “When interest rates were as low as they were, people used that opportunity for growth. They would go to the bank, show a lot of assets, and the bank would ask for too much collateral. All of a sudden, they’re ­over-inventoried. Now that interest rates are going up, the short-term debt is ­getting more expensive. So the excess inventory is costing.

“The larger issue is why they’re taking on debt in the first place,” he continues. “They could just borrow the money because it was cheap. Too often they’re using it just to keep up with bills. But then their credit is either tapped out or they max out at Christmas. The line of credit is required to be cleared up once a year. But some jewelers maybe never pay it off or only for 30 days or so. Then it’s just a lot of debt rather than actually having a line of credit.”

When that threshold is reached, businesses are further burdened by not being able to reorder fast sellers. “Aged inventory is very hard on the bottom line,” Hayes says. “If you aren’t turning it, that’s going to hurt.”

Jewelers need to embrace a strategic approach to incurring debt. “They should consider converting revolving debt to fixed-term, say a five-year term loan, so they can use debt intelligently rather than suffer ongoing, increasing cost of servicing the outstanding debt,” Sherman advises. “Then they can use debt when it makes sense, to drive growth, like bringing on a new line or opening a new location.”

Rising interest rates are also likely to slow consumer demand, hitting discretionary spending with the double whammy of a heightened incentive to save in tandem with increased costs for making credit purchases.

“As interest rates go up, the cost of living goes up,” Hayes explains. “It costs more for people to get loans for homes and cars. That reduces their spendable income. And when they see an opportunity to make a little bit by not spending, they’re going to be more likely to start saving again, and that will slow things down further.”

Stone predicts the impact will be felt mainly in the middle-income sector. “The affluent customer is resilient. They’re still spending money,” he says. “But we’ll probably see mainstream client traffic and sales decline just as we did with the [2008] downturn.”

To counter these factors and generate sales, Rickert urges ­jewelers to embrace subsidized consumer financing programs such as the one the American Gem Society offers through Wells Fargo Bank, which ­extends approved customers 0 percent financing for up to a year if they make their monthly payments, or 9.99 percent for a five-year payoff.

According to Rickert, there are two kinds of customers: “those who have money in their bank accounts but like using other people’s money if they can get the 0 percent, and the first-time engagement customers who are making a substantial purchase but don’t want to pay regular credit card rates. This way it’s more like purchasing a vehicle.”

Profiting From a Stronger Dollar

A silver lining to rising domestic interest rates has been a corresponding run-up averaging about 10 percent in the value of the dollar versus foreign currencies. This presents an opportunity to increase profit on imports.

“The advantage is with smaller boutique manufacturers,” Pollak says. “Ninety percent of the Italians are still selling in euros. We just got back from Vicenza, which is reestablishing itself as an important show. We definitely did some new sourcing.”

The United Kingdom has been especially attractive for U.S. buyers, as the pound has undergone downward pressure stemming from Brexit struggles. “We discovered a sterling silver line out of England, and it’s sold exceptionally well. Our turn is tremendous,” Hayes says. “So we doubled down. That puts us in a pretty good spot.”