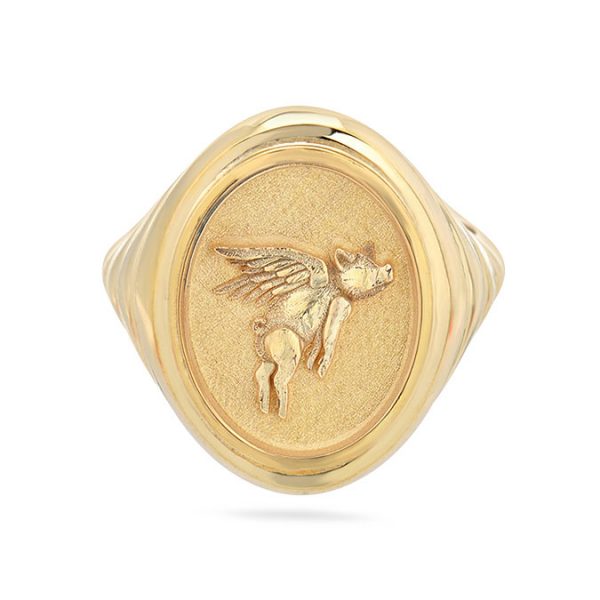 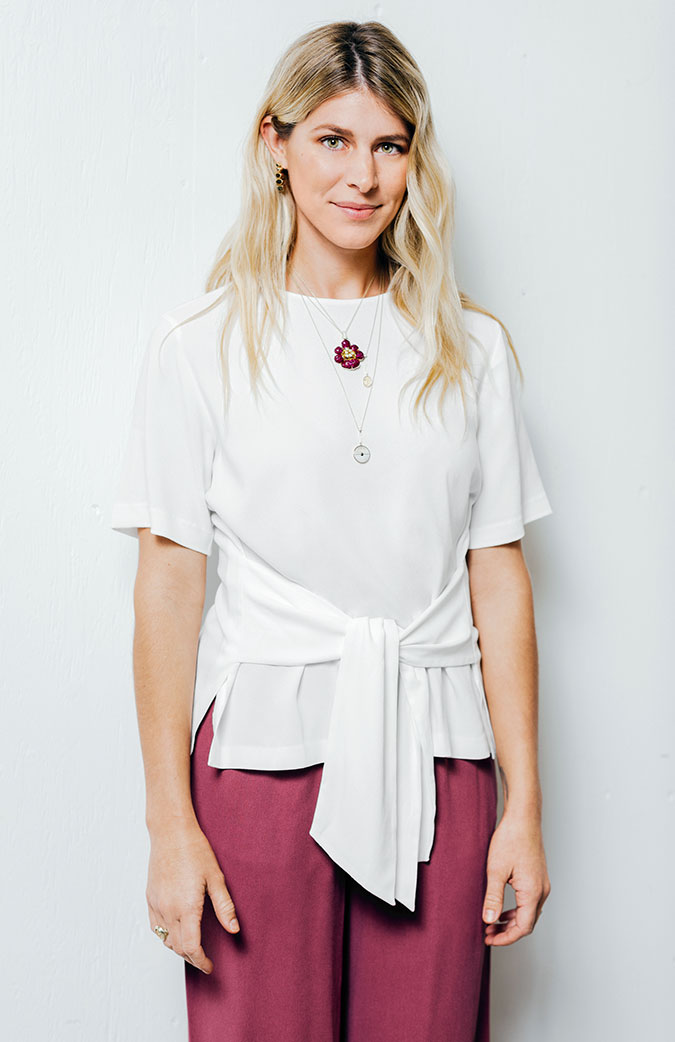 Karma is rich for Kirsty Stone and her up-and-coming brand, Retrouvaí, whose jewels reconnect wearers to the past

When Kirsty Stone was a child in Toronto, she did everything you might imagine a future designer would do. “I was like a creative, gypsy child,” she says of her early years taking her clothes and jewels apart and gluing them back together. “I’d take all the stones out of the little, dinky jewelry that I had and lose them all.”

Stone’s aunt wanted to stoke the next generation’s creativity, so she set up crafts for her children and their cousins. “All the other kids would do one piece and move on to the next game, and I’d be sitting there with, like, 80 things done on the table.” Her grandmother saw how much Stone loved jewelry, so she passed down some priceless pieces, including a gold lace ring with six diamonds set on top. Naturally, young Stone took that apart too.

Whatever she may have lost in precious gems—don’t tell her parents!—Stone has gained in a lifetime of inspiration. Her 2-year-old line, Retrouvaí, which has recently come into its own, can be traced back to those deconstructing days. Her collection of future heirlooms is named after a French word meaning “to reconnect with something from your past.” 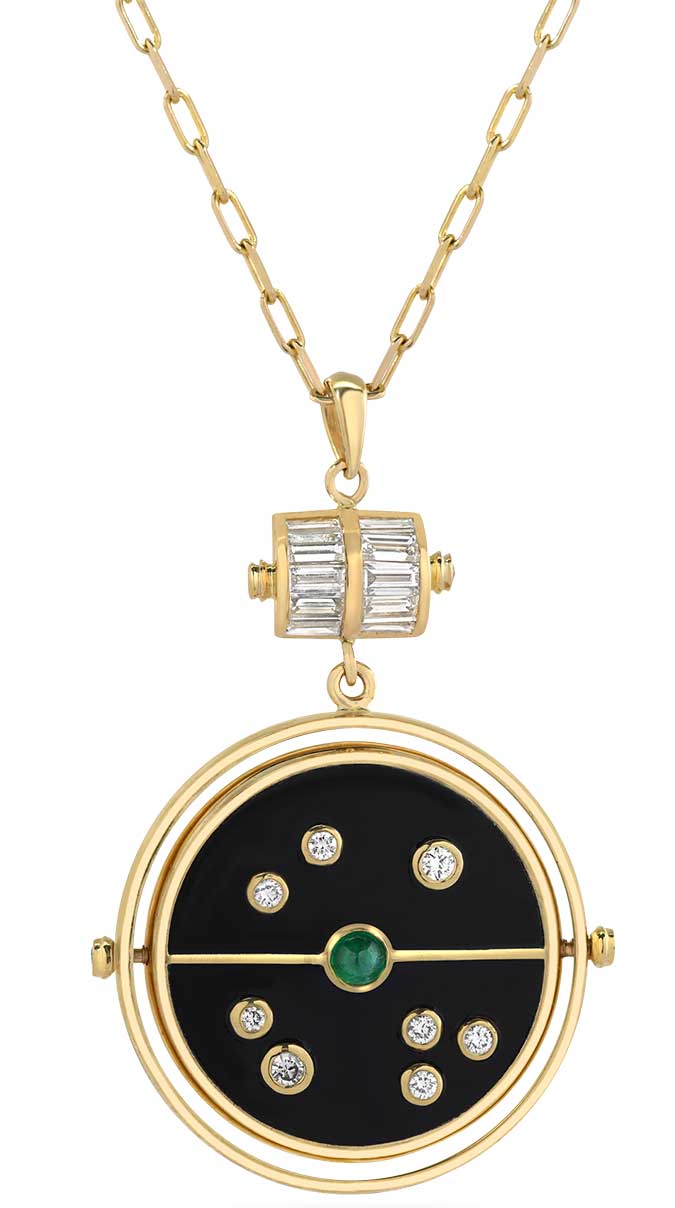 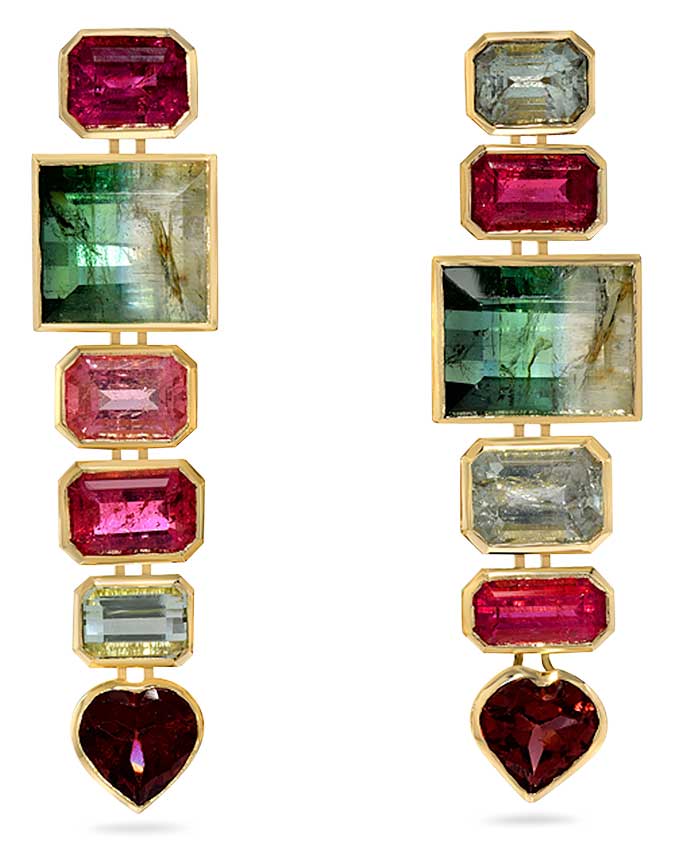 When we meet for lunch in Los Angeles in late spring, Stone is still fielding orders from last fall’s Paris Fashion Week (she exhibited at For Future Reference’s private showroom), and she has just wrapped a trunk show in Dallas that depleted her entire inventory. It’s a whole new world for Stone, who’s loving every minute—even if she feels a bit discombobulated.

“I kind of have my head down,” Stone announces upon her arrival. “Like, I live here, and I don’t normally wear clothes”—by which I think she means she is working her butt off and she puts on whatever clothes are at hand before she runs downtown to oversee the production of her line. (For the record, Stone looks lovely in a black-and-white striped skirt, no jewelry but a wedding band of emerald-cut diamonds on platinum, and a hint of makeup.)

She has a way of seeming simultaneously flighty and grounded—which just might be the sign of a true creative entrepreneur. “I’m reinterpreting classic motifs,” she says excitedly, “and giving them a modern message.” Stone leaps from her seat, momentarily abandoning her quinoa vegetable soup, and unties a velvet case on the next table, unfurling her entire collection in progress.

There are signets, both rings and pendants, galore—a flying pig, a unicorn, an owl, and a lion. A double-sided pendant has a double-sided diamond. A diamond boomerang pendant rests on a quartz inlay that says “Karma.”

“I have a parrot signet that says ‘Truth,’ which is onyx and emerald. And then the mother-of-pearl and diamond signet has sunshine on the back, and it says ‘Optimism.’ ” The ­letters are kind of jumbled, so you have to decipher one of the four ideals: Wisdom, Truth, Karma, and Optimism.

“It started with the flying pig,” Stone explains. “I wanted to do a signet, and I wanted to give it a twist.” Customers’ initials would be the old version of that. Stone was angling for quirky. “I mean, I’m a little offbeat. I wear things that people would say don’t go together, but I don’t care.”

The flying pig is, by far, her biggest seller. It’s engraved with a message: “Anything is possible.” 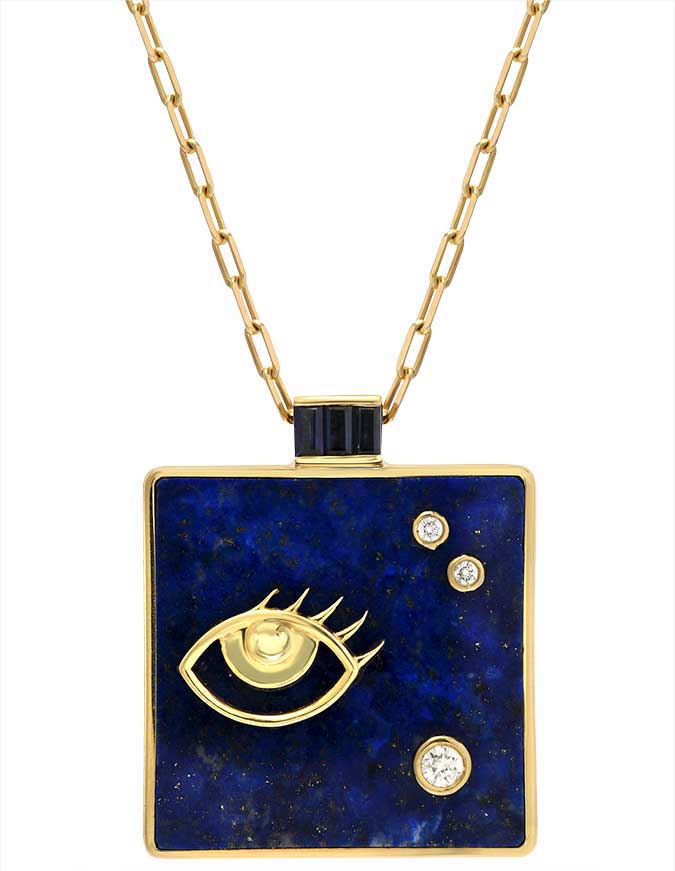 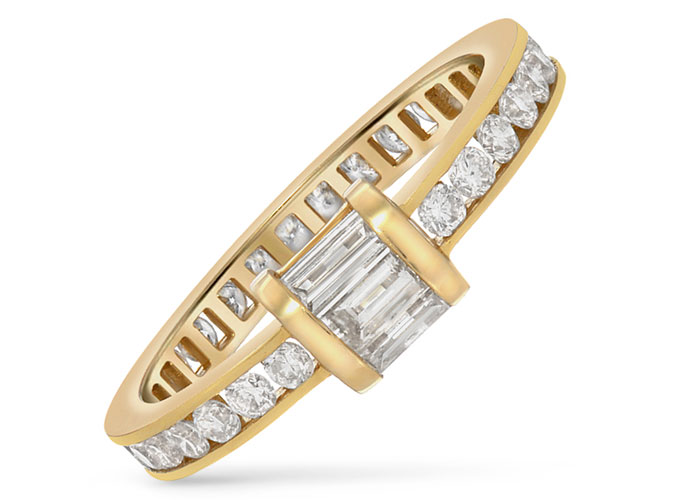 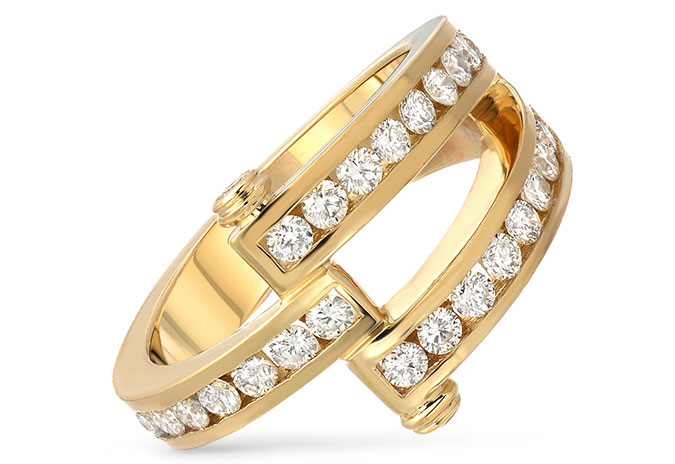 Indeed, just four years ago, Stone was still working her day job managing a high-end architecture firm in Beverly Hills, Calif., after relocating from Toronto in 2010 for L.A.’s weather and creative community. She started at the firm when one of her closest friends was just opening it. “We were in his house, with his kids playing on the floor, while we started a company,” she says. “It began from nothing. Now it’s a $50 million company with 50 employees.”

Working there taught her priceless lessons in owning and running a business, but she was careful not to get too caught up: She was doing this in order to get her footing and create her own jewelry line. “I never forgot about it,” Stone says. “It pained me on a regular basis, though I loved the people I worked with. I was like, I’m building your dream, not mine.”

During those years, she prepared herself by shadowing a few jewelers in downtown L.A. She was driven to learn about how everything is made so that now, as she says, “I’m not walking around like an idiot, being like, ‘I design jewelry.’ A lot of people just want to make money. They take pictures off Insta­gram and drop them off to have someone make it better.”

Stone attributes much of her knowledge to the generous tutelage of a jeweler in downtown L.A. who took her under his wing. She recalls him saying, “I see myself in you. When I was your age and living in Lebanon, I was ready to do anything to get experience, and someone gave me a bench.” So he paid it forward. “He would introduce me to people and tell them, ‘She gets my price,’ ” Stone says.

Her surname seems beautifully symbolic, as if becoming a jeweler were her destiny. But she wasn’t born with the name Stone; she married into it. And it was the act of marriage that allowed her to debut her own line. Stone’s wedding four years ago paved the way for the green card that gave her the freedom to pursue her jewelry calling, just as she was thinking the architecture business was solid without her. Perhaps it was destiny.

She had already started off slowly, making wedding rings for friends. Newly empowered, she dove in and debuted ­Supply and Demand, a line of jewels that connected craftspeople in developing nations to a supply chain here. She envisioned it almost like Toms (the wildly popular shoe brand) but for jewelry, in partnership with Opportunity International, a financial services nonprofit for which she’d volunteered, visiting different countries and sourcing gems. 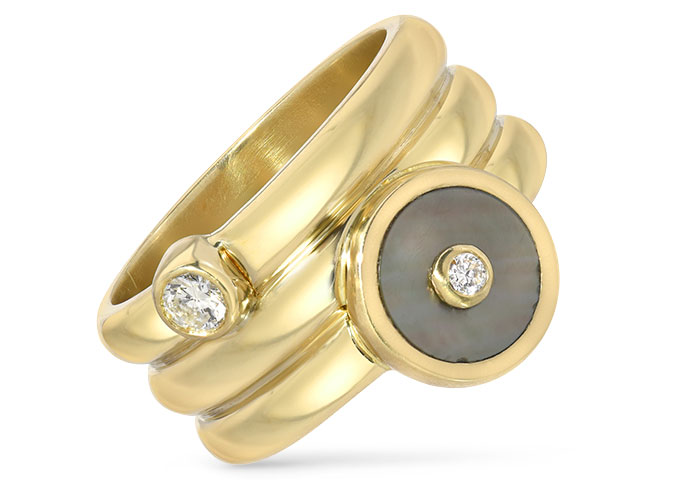 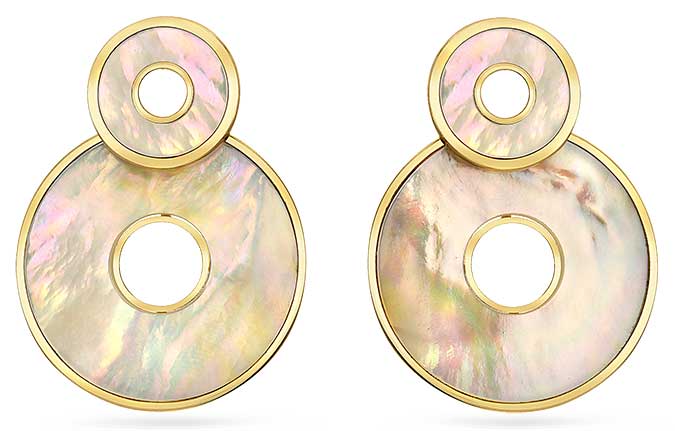 One day she realized that she was pursuing something noble and worthy, but she wasn’t following her heart. “The jewelry was going in a different direction—those early collections were confused.” She was being driven to create designs that tended more toward high fashion, but building the supply chain was stifling her creatively. It was that understanding that set her on the path to Retrouvaí.

In 2015, Stone began to evolve the aesthetic while keeping the old name. Then she started on the signets, she rebranded as Retrouvaí, and—boom!—she started receiving attention. Today, Retrouvaí can be found in select stores as far afield as Brazil, Switzerland, and the U.K. It’s also sold in Barneys New York and at boutiques in and around Chicago (Frances Heffernan), Dallas (Ylang 23), and New York City (Fivestory).

Stone has found clarity in her life by helping create meaning in the lives of her customers: “I want women to give things to their children that will make them feel powerful. I want to give people a head start on the stories they will pass down. If I open your jewelry box, I see a story in every single piece. Like, ‘This came from here,’ or ‘This, oh, it’s a funny story.’ ”

Meanwhile, as she grows her business, she barely has time to create stories of her own. “I’m just trying to get everything done so people don’t yell at me,” she says, smiling.