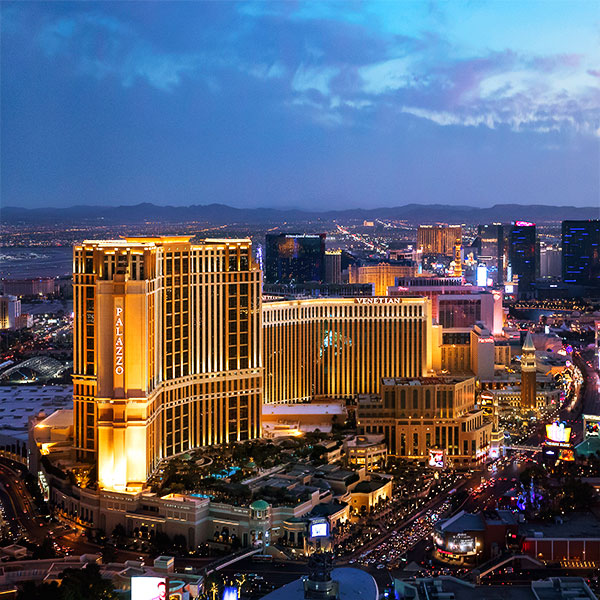 Like a bottle of fine wine, Jennifer Lopez, and those memories of sex in your 20s, Las Vegas gets better with age.

Every year, it seems, Sin City adds new and over-the-top attractions designed to wow, entertain, satiate, and delight visitors who come to have their minds blown.

More than 30,000 jewelry industry professionals soon will descend upon Vegas for the annual JCK show. Here’s a rundown on the latest and hottest spots around town to investigate.

In the olden days of Vegas—like, last year—the Sands Expo Convention Center, where the show takes place, was connected to two separate hotels: the Venetian and the Palazzo. Since then, the parent company has brought the two properties together as separate towers under one name: The Venetian Resort Las Vegas. The mother ship also has added a host of new restaurants and diversions.

A sister restaurant, Moon Palace, sits across the corridor and serves special sliders named Tastys all night long. These handheld wonders are made with beef patties, American cheese, and caramelized onions served between two Hawaiian rolls. Order two or three with chips and beer (the only other items on the menu), and you’ve locked down the best hangover cure short of an intravenous drip.

Die-hard karaoke fans can inquire about the private soundproof room at Majordōmo. For everyone else, there’s Kamu Ultra Karaoke, a new 40-room multiplex that opened in the Grand Canal Shoppes in early 2020. What makes Kamu stand out is that each room is a party unto itself. Different rooms have different themes, and Chef Chris Oh cranks out popular dishes such as oysters, pizzas, and churro doughnut holes. Of course, the joint has bottle service, too, for those patrons who need booze in order to sing.

Elsewhere on property, just off the Venetian lobby, is a new boutique from Dandelion Chocolate, a small-batch, bean-to-bar craft chocolatier from San Francisco. While you can swing through here to purchase a single-origin chocolate bar, the real indulgence is a splurge beverage from the list of five hot-chocolate drinks. Who cares if the drink is basically melted chocolate in a cup? Like the advertisements say: What happens to your calorie intake in Vegas stays there.

Another food indulgence: the new Sunday (and bottomless dim sum) brunch at Chinese restaurant Mott 32. The menu features family-style dishes such as soup dumplings and Iberico pork buns and everything is cooked to order. Another option: bottomless mimosas for an extra $35 per person.

In late 2019 the Sands revamped its Venetian art tour, a surprisingly ­informative two-hour walking tour of all the artwork on-site. On this ­excursion, a guide shares stories behind the resort’s replica Italian landmarks, including the Rialto Bridge, Campanile Tower, and St. Mark’s Square. The guide also takes groups through tower lobbies to gawk and marvel at some of the sculptures.

The spectacles don’t stop there. Perhaps the biggest headline-grabber around town but outside of the Venetian complex is Viva Vision, the newly renovated video screen at Fremont Street East. This technology spans five city blocks downtown and comprises more than 49 million energy-efficient LEDs, more than 16 million pixels used to generate brilliant resolution, and 5,000 nits to make the screen seven times brighter than its predecessor. It debuted New Year’s Eve. The best part? Viva Vision is totally free to experience, though you might want to bring money to pose for a photo with a random guy in a Deadpool costume or a full-body, Borat-style banana hammock.

Another showstopper: The Mayfair Supper Club at Bellagio. The new venue—in the former Hyde Lounge space—combines throwback big band–style entertainment and innovative dining with an epic view of the Fountains at Bellagio. The vibe is exciting and immediate, enticing guests to feel like every moment is something special. The goal: to get you to stick around all night. Lineups at Mayfair change nightly. Happy hour features live piano, caviar specials, and cocktails (try one of the three smoked Old-Fashioned ­varieties). After dark, male and female vocalists backed by a band perform live jazz. Later in the evening, usually around 10 p.m., a 360-degree light show takes over the restaurant. On weekends, deejays start spinning at around 11 p.m. and alternate with live performers until the wee hours.

The Vanderpump Cocktail Garden, inside Caesars Palace, offers a totally different experience. From the mirrored walls to the faux trees out front, the homage to the brand of reality television star Lisa Vanderpump feels utterly contrived. Oddly, however, it still works, because, well, it’s Vegas. Skip the small plates and go straight for the craft cocktails; some come in sizes big enough for two or 10.

East of The Strip, the party rages after hours at two bars right on the edge of Chinatown: The Golden Tiki and The Sand Dollar Lounge. The Tiki is what you’d expect from the name, only better: tropical drinks, pu pu platters, and kitschy decor that includes shrunken heads of local celebrities and animatronic birds that spew curse words. (If you’re a dude, pay close attention to what the skulls have to say about your manhood at the urinals.) The now smoke-free Sand Dollar is grungy but great for live music; on any given night, a headliner from The Strip might come in after finishing a show to let it rip.

For a crash course in the Vegas foodie scene, consider a walking tour with Lip Smacking Foodie Tours, a nascent outfitter run by a former server at some of the best joints in town. Standard experiences range from two and a half to five hours and include four or five different sit-down stops for a signature dish at each. Some of the stops include Bardot Brasserie at Aria and Carson Kitchen downtown. Shorter tours, operated by sister company Finger Licking Foodie Tours, run about two and a half hours and stop at a greater number of venues for smaller bites. As of press time, these tours focused on restaurants in the LINQ Promenade and downtown.

Finally, in 2020, we’d be remiss to list the latest and hottest activities in Las Vegas without mentioning at least one cannabis dispensary. New this year: a place where you can try the weed before you buy it. Dubbed The Vegas Tasting Room, the spot is located at the NuWu Cannabis Marketplace, which is owned by the Las Vegas Paiute tribe and located just south of downtown. Here, in the comfort of a loungelike atmosphere, guests can try dabs, a ­concentrated cannabis resin that is heated before being inhaled. The price: $8 or $9 for one-five-hundredth of a gram. Considering how rare $10 blackjack tables are these days, the dabs represent some of the cheapest hits in town.