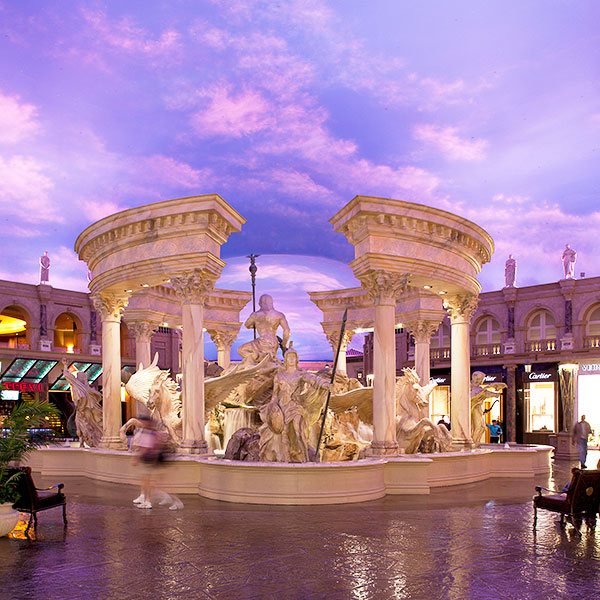 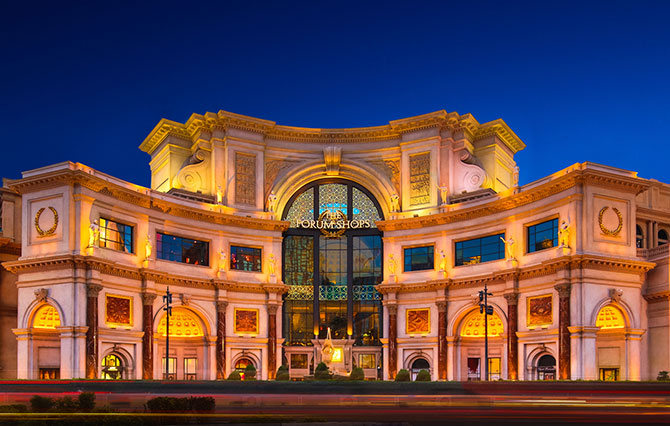 In Las Vegas, a town where fresh and fabulous reign supreme, the nearly 30-year-old Forum Shops continue to innovate and impress

In Roman times, the forum represented the center of a city, the site of the most important religious, political, and social activities. In modern-day Las Vegas, the Forum Shops at Caesars mall serves a similar purpose: It’s the heart of the city’s retail culture.

Sin City’s oldest mall certainly has celebrated a lot of firsts since opening its doors in 1992. It was the first shopping center to bring designers such as Versace, Armani, Salvatore Ferragamo, Fendi, Gucci, and Valentino to town, and the first to incorporate thematic and period design elements such as columns, fountains, streetscapes, and a painted ceiling designed to replicate the Mediterranean sky. The Forum Shops also were home to Vegas’ first real destination restaurant—Wolfgang Puck’s Spago (now located at the Bellagio)—and the first attempt to incorporate zany attractions to keep shoppers coming back for more.

Today, the 675,000-square-foot shopping mall boasts 160 of the most current and popular shops and restaurants in Las Vegas, including 50 or so you’ll find only here. Sure, there are other malls in town. But according to Maureen Crampton, director of marketing and business development, The Forum Shops boast higher sales per square foot than Rodeo Drive in Beverly Hills.

Crampton adds that more than 28 million people visit The Forum Shops each year: “In a place like Vegas, where everything competes for people’s attention 24/7, that says a lot.” 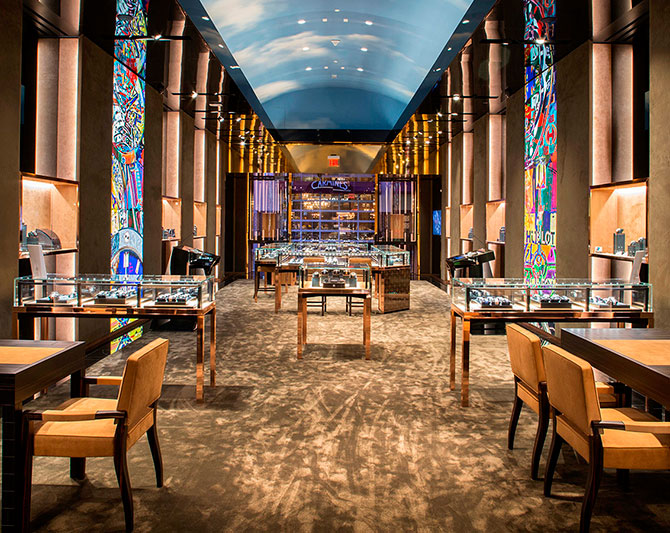 The Forum Shops opened at a time when Las Vegas was very different from the place we all know today. Back then, before the casino boom, new construction wasn’t typical, especially new construction of a mall. Crampton knows this because she’s lived it; she’s been with the mall since day one.

In the beginning, Simon Property Group and Caesars Palace partnered to create a shopping venue unlike any other in Las Vegas. The debut phase comprised 283,000 square feet and 70 stores, including more than a dozen restaurants. Quickly, however, as customers flocked to the mall by the thousands, the organizations recognized they had built something far more valuable than just a mall; the attraction was a destination unto itself.

“The thought that we were going to build a big mall with high-end stores next to a casino with a Roman theme was seen as a curious kind of approach,” Crampton says. “Nobody in the 1990s was thinking about experiential shopping—and yet customers couldn’t get enough. In the beginning, stores couldn’t stock enough bags to keep up with demand.”

All this early success led in 1997 to phase two: a new wing with 35 additional shops, two more restaurants, a 50,000-gallon saltwater aquarium, and a free and entertaining hourly show (we’ll get to that in a bit). Simon Property Group completed phase three roughly seven years later, adding another 57 stores, a giant atrium, a reflecting pool with a 14-foot waterfall, and a front door that opens onto The Strip.

From the beginning, the Forum Shops mall has attracted an impressive array of upscale tenants, including renowned ­Miami-based restaurant Joe’s Stone Crab; cigar bar Casa Fuente, the only place in the United States to purchase ­authentic Casa Fuente cigars from Mexico; and the No. 1 ­boutique for ultra–high-end Swiss watch brand Hublot.

The diversity of stores at The Forum Shops is the mall’s biggest strength, says Zubin Nuggud, director of boutiques for Hublot for the Las Vegas market. Nuggud says people come “to see the wide variety of designer stores and boutiques where they might not be able to [shop] in their hometowns.” Adds Nuggud: “l love the variety of people The Forum Shops brings—on any given day, you will see your average person to the super wealthy, to celebrities/athletes, and even foreign dignitaries from all parts of the world.” 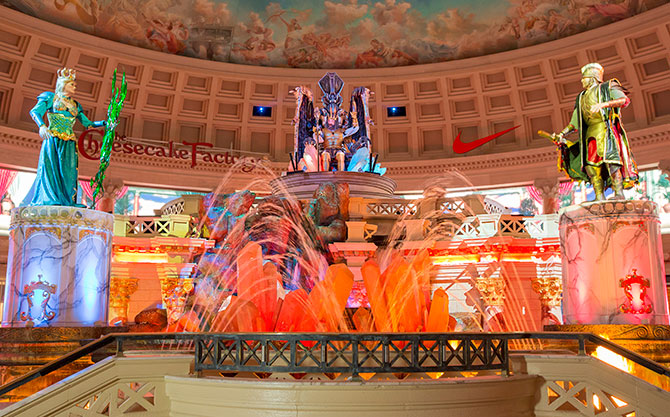 Over the mall’s first few years, as thousands upon thousands of guests wandered the corridors of The Forum Shops, the folks from Simon realized two things: Shoppers love having a reason to explore, and attractions can never be too over-the-top in Las Vegas. As phase two unfolded in 1997, these realizations led to the creation of a truly iconic spectacle: the “Fall of Atlantis” animatronic show.

One part theater, one part puppet-fest, “Fall of Atlantis” plays out every hour, on the hour, daily, starting at 11 a.m. It ­incorporates fire. It incorporates water. It incorporates bombastic sound effects. It also stars a bunch of 9-foot-tall talking statues and a dragon with a 20-foot wingspan.

The plot of the story is nonsensical: King Atlas is planning to abdicate and must decide which of his cranky children will assume the throne. Along the way the kids fight, one slays a dragon, and some characters live happily ever after. The experience is kitschy and hokey but also remarkable to witness; Crampton notes the costumes and props were created by the same artists who worked on movies such as Thor and Pirates of the Caribbean.

“People are obsessed with it,” she says of the show. “Even though the performers are animatronic, they receive an ovation almost every time.”

“Fall of Atlantis” isn’t the only offbeat attraction at The Forum Shops; the newest section has another, quieter specimen: a freestanding spiral escalator made exclusively for The Forum Shops by Mitsubishi. Crampton says the escalator was designed for both form and function—intended to feel like a carnival ride but installed with the purpose of moving people from one level to the next. The invention fulfills both goals with panache. 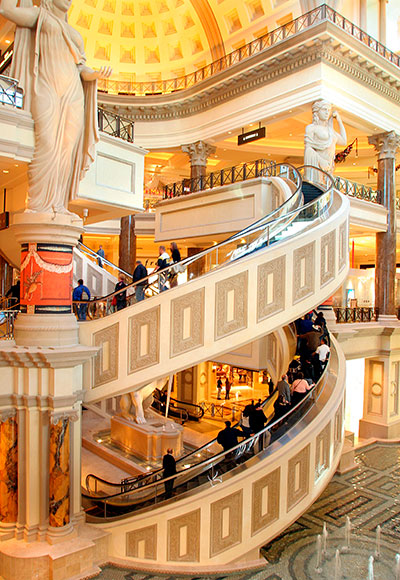 This blend of great stores, whimsical attractions, and a Roman theme has proved to be a winning formula for The Forum Shops. According to Crampton, while the mall may expand again in the future, there are no plans to disrupt that mix.

Instead, the Forum Shops management will continue to work closely with their friends at Caesars Palace to deliver the best messaging and programming to guests coming in from the casino. Already the mall has seen a bump in foot traffic as a result of the March opening of Lisa Vanderpump’s lounge, Vanderpump Cocktail Garden, just inside Caesars Palace.

At the same time, Crampton says she expects current tenants to transform the experiences in their respective stores, following an industrywide trend toward more personalized service.

“We’re already a pretty experiential place, but I see the mall becoming even more driven by hospitality,” she says. “Lounges, concierges, relaxation areas—you name it, I bet we’ll see it. We’ve managed to be relevant for 27 years. I don’t see why we won’t figure out a way to stay relevant for another 27 more.”