Throughout JCK’s 150 years, hundreds of jewelry trends have cycled in and out of style. We didn’t cover them all—there were periods, particularly in the early years, when design was hardly discussed, let alone dissected—but most major jewelry eras were immortalized in our pages. And because there are few more clear-cut ways to digest a period of time than through its trends, fads, and fervors, we’ve distilled some standout jewelry styles from each decade of JCK’s existence. 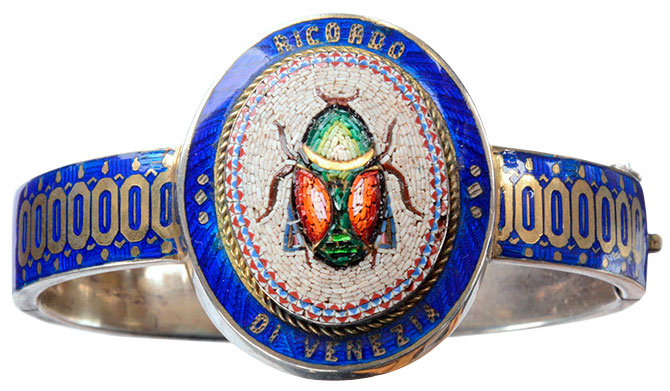 The Victorian era, which was already in its second half by the 1870s, was one of jewelry design’s most profoundly creative periods. When the American Horological Journal and The Jewelers’ Circular merged in 1873, the new magazine had plenty of juicy trends and innovations to report on—among them, the craze for detailed and ­whimsical micromosaics for both men and women; the global hoopla over Etruscan revival jewelry, inspired by widely publicized excavations of the Etruscan ruins of Italy; and the resurgence of silver as a stylish metal (precipitated by the discovery of a silver mine in Virginia City, Nev., in the 1860s). 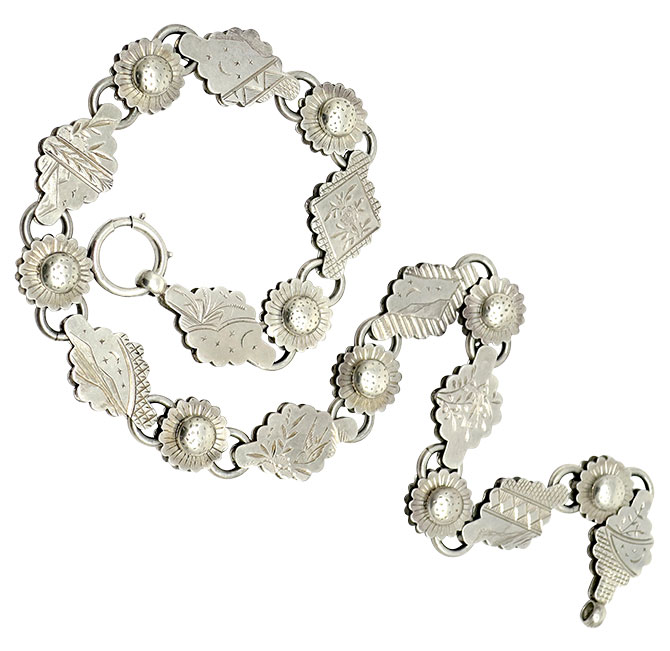 The 1880s saw the rise of the Arts and Crafts movement, which brought medieval and age-old folk styles into the fashion spotlight. Concurrently, the nature motifs that would come to define the Art Nouveau era—which would enthrall jewelry lovers in the coming decade—began popping up in Europe. In the April 1882 issue of The Jewelers’ Circular and Horological Review, an unnamed reporter wrote disapprovingly about jewelry featuring flora and fauna, complaining that trendsetters “have inaugurated in England an idiotic craze for what they term ‘the aesthetic in art’ whose followers worship sunflowers and apostrophize the virtues of the lily.” (Flowers and creatures are still in style, but JCK reporters have become decidedly less grumpy.) 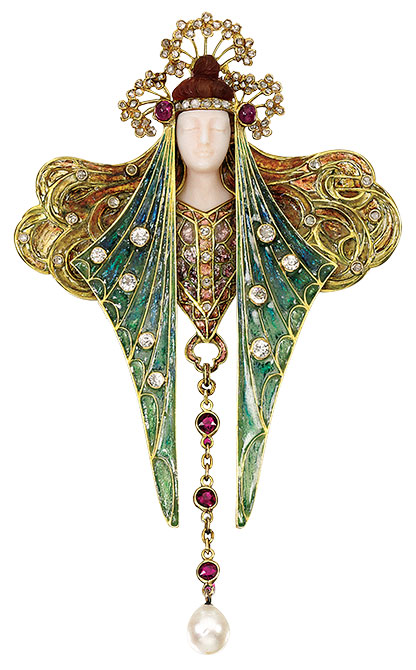 The Art Nouveau movement, a backlash against industrialization, had a huge influence on jewelry design in the 1890s. Its flowing, switchback lines and organic and occult motifs were a signature of masterful jewelry designers including René Lalique and Georges Fouquet. Death and the occult were popular culturally; the Ouija board, which debuted in 1890, was often pulled out at social gatherings, and mourning jewelry was still worn. Among the product descriptions featured in The Jewelers’ Circular and Horological Review at the start of the movement was this gem from April 1895: “A perfectly ­natural-to-life ring is a hoop snake folding the tip of its tail to its mouth, its body remaining meanwhile in a rigid circle.”

Pearl, gem-set, enamel, and diamond brooch/pendant by Georges Fouquet; sold for $156,320 at Sotheby’s 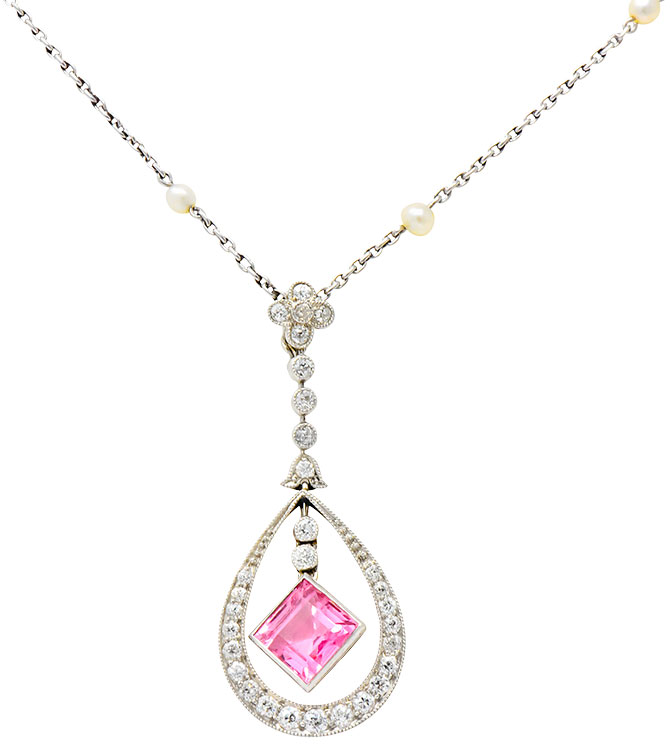 Hot jewelry styles in the Edwardian era (1900–15) included bejeweled ­lorgnettes—spectacles with a handle that were worn on a chain for decoration as much as for practical use—and designs that harkened back to 18th-century jewelry, particularly the sparkling court of Versailles (Cartier reportedly urged its designers to look to 17th- and 18th-­century Parisian architecture for ­inspiration). The icy whiteness of platinum was enormously popular, and a story in the June 1909 issue of The Jewelers’ Circular and Horological Review reported on a trend inspired by expeditioner Robert Peary’s historic journey to the North Pole in April of that year: jewelry that “used white metal ­symbolizing snow, and rings, pins, and charms incorporating poles in their designs.” 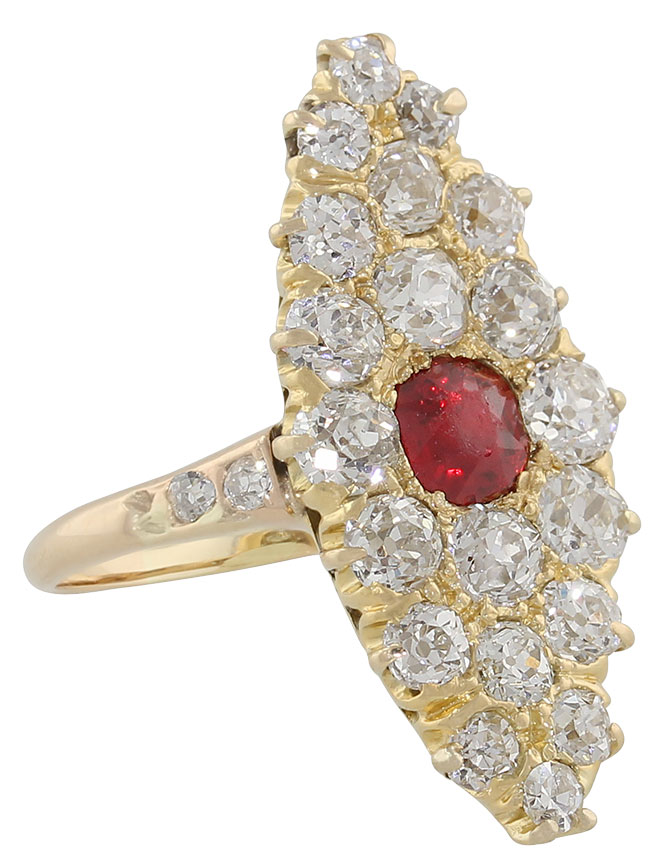 Platinum was still trending in the 1910s (milgraining, then a new technique, was extremely popular), but the U.S. military requisitioned the white metal in the early years of World War I, so other metals filled the jewelry void. Women still wore Art Nouveau’s lilting curves, but by the end of the decade, the bold, graphic lines of Art Deco—a movement born in Paris and defined by stark geometric motifs and densely gem-packed decoration—began appealing to stateside style-setters. 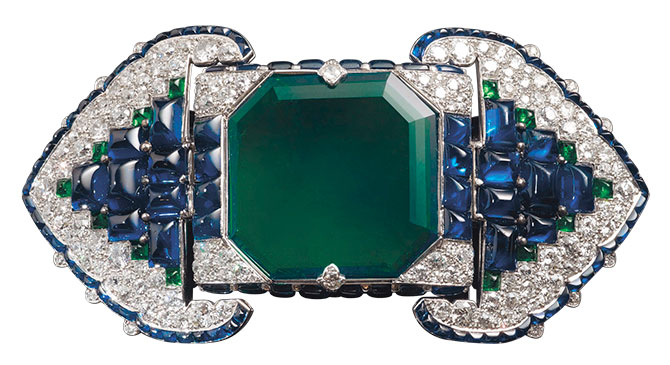 The Roaring ’20s ushered in a glamorous ­jewelry aesthetic made famous by Jazz Age flappers, the influencers of the day: white gold and platinum styles; long pearl necklaces, real and costume; hair clips and headbands set with rhinestones and diamonds to complement the new short hairstyles; and thick bangles made of Bakelite, metal, and plastic. “When she moved about there was an incessant clicking as innumerable pottery bracelets jingled up and down upon her arms,” wrote F. Scott Fitzgerald in the ultimate ’20s society novel, The Great Gatsby. Meanwhile, Indian maharajas and European nobility enticed designers from Cartier, Tiffany & Co., and Van Cleef & Arpels to craft grand, gem-laden jewels that would go down in history for their remarkable use of color, including carved emeralds, rubies, sapphires, and onyx. 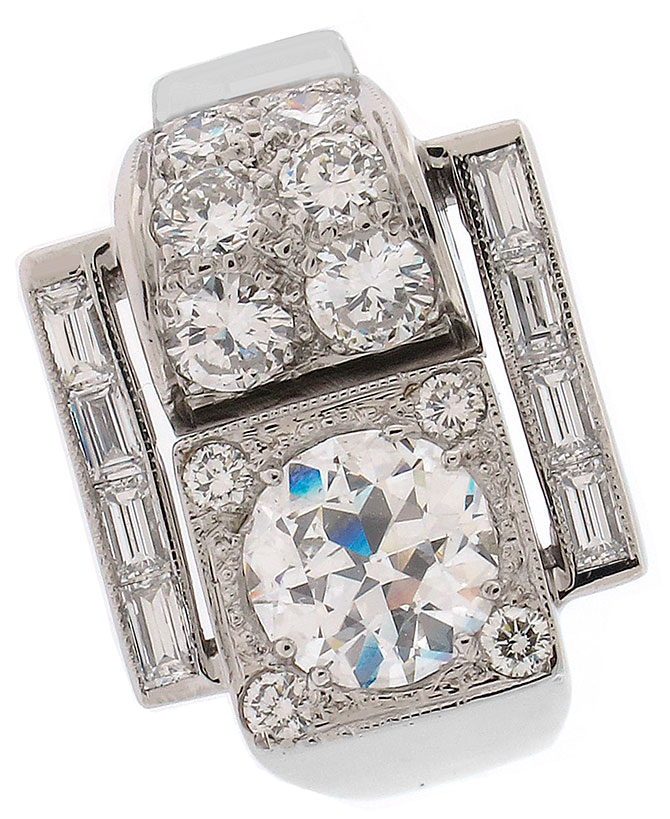 In 1930, The Jewelers’ Circular and Horological Review ­editor-in-chief T. Edgar Willson wrote, “Is yellow gold about to come back into popularity?” He was right—though the metal wouldn’t come back into favor until the end of the decade, when Art Deco matured into a style known as Art Moderne, whose focus on streamlined silhouettes was inspired by the ­Machine Age and helped tee up the yellow gold–heavy ­Retro style that would dominate the 1940s. Simultaneously, as the Great Depression wore on, jewelers were forced to find substitutes for precious gems. They used paste, rhinestones, nickel silver, zinc, and other non-fine materials to attract women eager to emulate the glittering gems worn by silver-screen stars like Bette Davis and Jean Harlow. 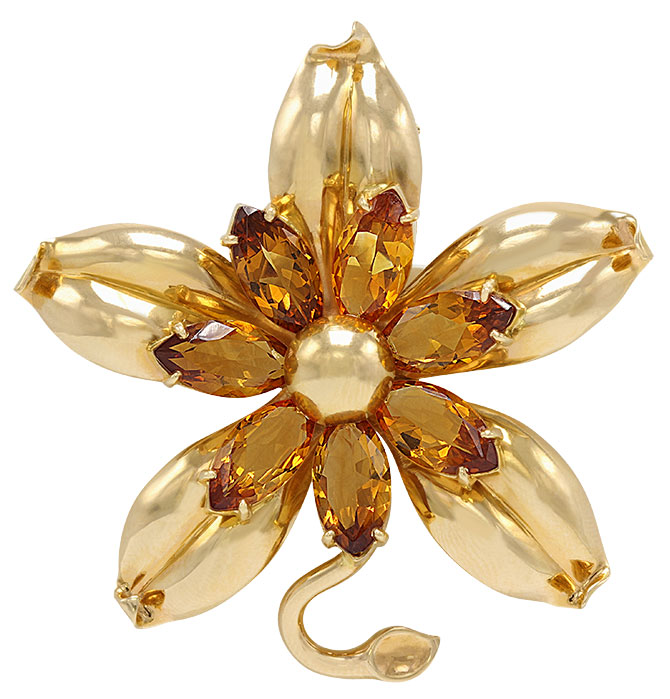 World War II changed the palette yet again. Necessity was the mother of the Retro period’s invention of gold jewelry starring quartz and cabochon-cut gems. Without access to the Asian markets and their bounty of colorful rubies and sapphires and lacking platinum—a strategic metal during World War II—designers looked to South America, especially Brazil, for stones that could be set in yellow gold to create big looks at reasonable prices. And while precious goods were limited, thanks to costume makers like Trifari and Monet, consumers were able to acquire jewelry styles crafted in humble materials, such as fruit and vegetable pieces inspired by film star Carmen Miranda’s famously towering fruit hats. Fashion magazines were now printed in color, so vibrant hues were the order of the day. 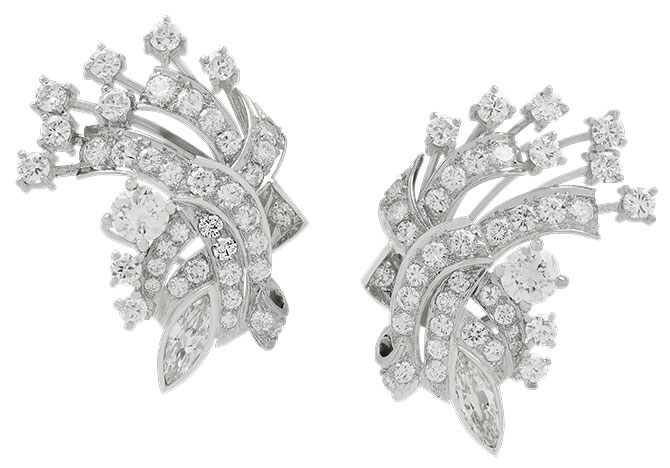 Jewelry design entered a period of profound creativity in the 1950s, as designers including Jean Schlumberger at Tiffany & Co. conjured incredible high-jewelry pieces dripping in diamonds—­diamond spray styles were ubiquitous—a sign of the era’s renewed prosperity. Meanwhile, high-quality costume creations from Joseff of Hollywood and others had “a fine, precious look,” said style writer Gerry Gewirtz in the February 1956 issue of J­ewelers’ Circular-Keystone. “Two all-powerful influences are the Oriental and the Empire,” she wrote. “New Spring jewelry is made so that the pastels are combined in magnificent arrangements, simulating paisley to complement the Oriental style of clothing,” while necklaces “look custom because they rim the neckline of the cardigan so nicely.” 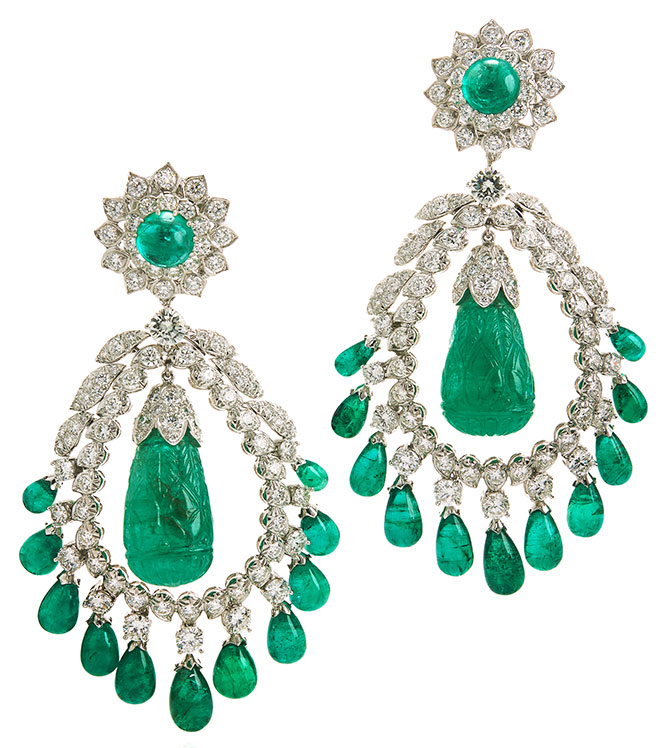 The preppy whimsy of the 1950s gave way to the ­anything-goes aesthetics of the 1960s as organic and Indian influences took hold of the popular psyche, giving birth to the memorable ­designs of society jeweler David Webb, a master of complicated color-intense pieces commissioned by the likes of heiress Doris Duke. At the same time, a notable sense of nostalgia seeped into jewelry designs. “Antiques have received a special stimulus the last few years from a continuously growing market of customers who want precious jewelry and something that is different,” Gewirtz wrote in February 1963—an observation that could easily appear in our pages today.

David Webb diamond and emerald earrings, from a 1966 pearl and diamond design for Doris Duke 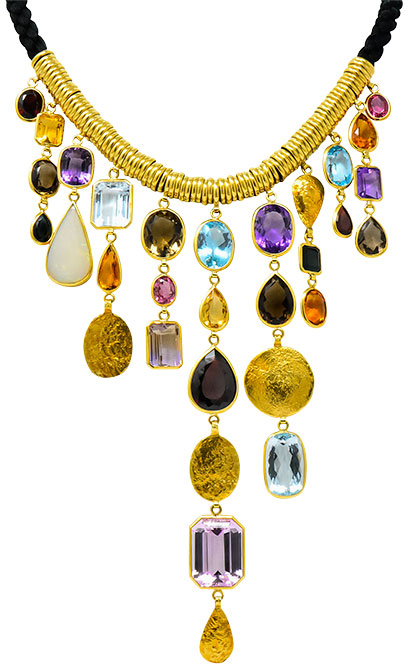 “The fashion explosion has become the fashion revolution,” Gewirtz wrote in August 1970. “The rules have been thrown out. Today, precious jewelry can be diamonds set in wood—or peridot or platinum. Any material makes it. All combinations work.” And by the mid-’70s, the disco era was popularizing midpriced jewelry, including mesh metal earrings and bib necklaces, hoop earrings, cuff bracelets, and sinewy gold chains. “Even sculpted jewelry looks softer,” Jewelers’ ­Circular-Keystone associate editor Annalee Gold wrote of the coming jewelry trends in February 1978. “Metal is folded like crushed fabric.” 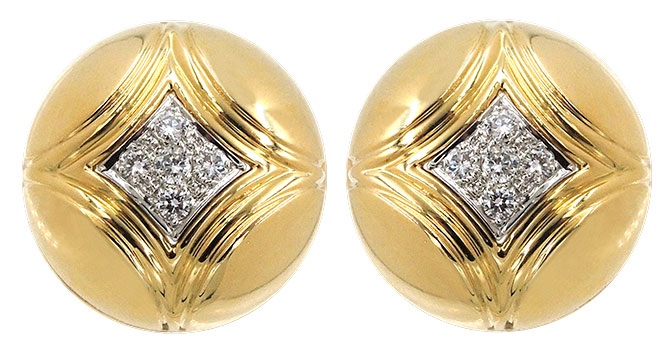 “Forget everything you read in this space six months ago! Once again everything goes,” wrote our New York editor Ettagale Lauré in August 1981. The line, in hindsight, was also an apt description of the decadent decade’s jewelry trends, which celebrated design that was oversize, over-the-top, and gilded. Trends in the “greed is good” era included pearl necklaces in styles ranging from neckline-framing prim to waist-length punky, enamel jewelry, and button earrings. Dynasty, Knots Landing, and other popular TV dramas made big diamond necklaces, earrings, and tennis bracelets must-have accessories for affluent consumers. Meanwhile, Madonna’s rubber bracelets and hip-hop’s bold gold styles shaped the jewelry choices of millions of teens and 20-somethings. 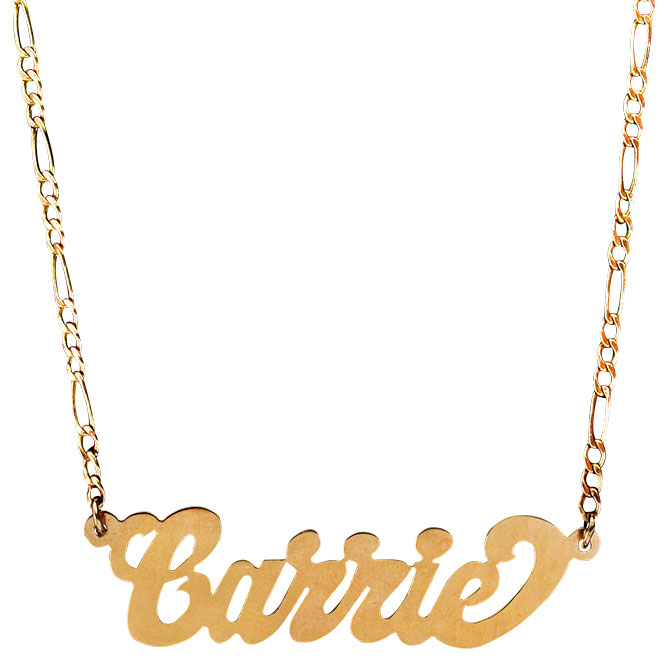 Minimalism in fashion, a tonic for the excesses of the previous decade, softened the demand for fine jewelry. Think of Kate Moss in those Calvin Klein ads, styled without jewelry, her hair slicked back. But as body piercing entered the mainstream (belly button rings were huge) and grunge bands made flannel the height of fashion, punky and tribal silver looks were in demand as were fabric chokers and, in a brief resurgence, flower power–esque plastic jewelry—fueled by famous neo-hippies such as Drew Barrymore and psychedelic ’90s band Deee-Lite. Pop culture’s role in the jewelry market could no longer be denied. By 1999, every woman in America wanted a yellow gold nameplate necklace, as popularized by Sarah Jessica Parker’s Carrie Bradshaw character in HBO’s influential Sex and the City.

Yellow gold tumbled back into the style spotlight in the 2000s, when celebrities including Lindsay Lohan and Paris Hilton donned dainty gold necklaces and earrings by designers including Jennifer Meyer. Perpetually hounded by paparazzi working for a crop of new online media outlets, the Hollywood style set wore jewelry that was suddenly identifiable—and shoppable—by the masses. Also in fashion: colored stone beaded bracelets, thick leather cuffs, layered white-metal looks, and jewelry with a spiritual bent, from string bracelets to amulets strung on leather. In the bridal arena, halo-style engagement rings began their sharp ascent to ubiquity.

Colored stones, once a side hustle for jewelers, moved center stage, with gems once dubbed “semiprecious,” like opal and morganite, graduating to fine-jewelry staple status. Other ’10s trends: slice gemstones and drusy, stacking rings and bracelets, perennially in-­demand hoop earrings, and pearls used in nontraditional designs. “The future of ­jewelry design rests on ­designers’ willingness to expand the tools available to them, reinterpreting the definition of fine to include everyday materials…crafted according to the highest standards,” wrote JCK editor-in-chief Victoria Gomelsky in a 2015 blog post. Her forecast proved prescient. Design that feels innovative, but embraces diverse materials, is having its day. Here’s hoping that spirit of ingenuity continues well into the next century.