JCK has documented the evolution of the pearl trade in America since the late 1800s. From Kokichi Mikimoto’s cultured pearl invention in 1893 to the impact of today’s climate-change crisis, we track the industry’s progress.

“The pearl is still the queen of gems. All really fine gems of the water find a more or less ready market in the trade and if of really fine quality command almost fabulous prices.”

These words are taken from an 1893 editorial in The Jewelers’ Review titled “The Popularity of Pearls.” The pearls in question? All natural—wild-­harvested from the Persian Gulf and purchased in Bahrain, or amassed by high-end ­importers through European dealers who procured from a variety of sources in “the Orient.”

That same year, Kokichi Mikimoto, the inventor of cultured pearls, was on the brink of revolutionizing the pearl industry from the waters of Japan’s Ago Bay. The story Mikimoto set in motion is a tale of science and commerce peppered by ongoing exploration, of new cultivation techniques and breeding grounds, and of tireless efforts to refine and improve these processes in pursuit of an ever more beautiful—and desirable—product.

A review of JCK pearl editorials past reveals the magazine has always offered tips for selling pearls to consumers, using tactics that are perennially relevant: Romance the scientific growth process, explain pearl quality factors, emphasize timelessness, and play up their trendiness (which has waned many times over the years, only to rebound stronger than ever). 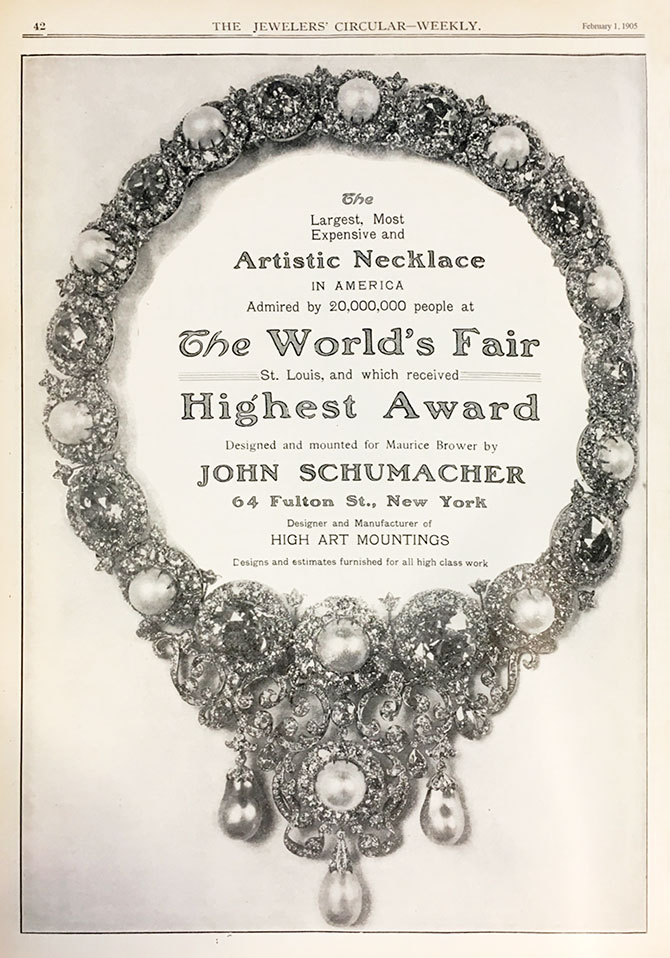 An ad in The Jewelers’ Circular-Weekly boasts that 20 million people admired the “largest, most expensive and artistic necklace in America”—featuring an abundance of pearls and diamonds—at the recent World’s Fair in St. Louis.

The Jewelers’ Circular-Weekly reports on “the youngest of the earth’s divisions” when it comes to pearl growing: “The pearl fisheries of Australia have ­displayed wonderful expansion.”

Pearl imports to America—presumably early akoyas—hit $10 million. But this lasts only until the stock market crash in October. Throughout the Great Depression, banks are forced to foreclose on pearl stocks, which had been used as collateral for loans.

In our March issue, we look back on the low value of pearl imports during the Depression and cite 1934 as the turning point despite the fashions of the day, which did not help demand: “With high necklines, tailor-made effects, and sports costumes, the pearl necklace was not required to enhance the neck and bosom of milady.” By the end of 1936, however, “styles began to change and already the pearl has regained fashion’s favor.”

At the end of World War II, following Japan’s surrender to the Allies, GIs stationed in Tokyo buy strands of ­Mikimoto pearls to bring home as gifts for their wives and girlfriends. Demand for Japanese akoyas spikes. 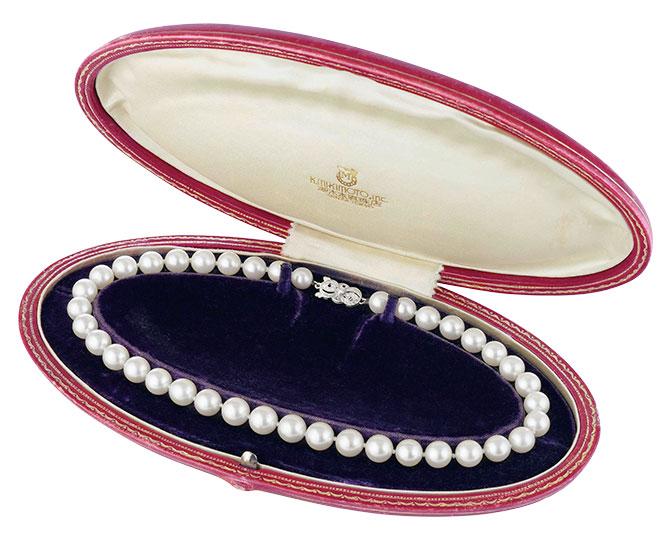 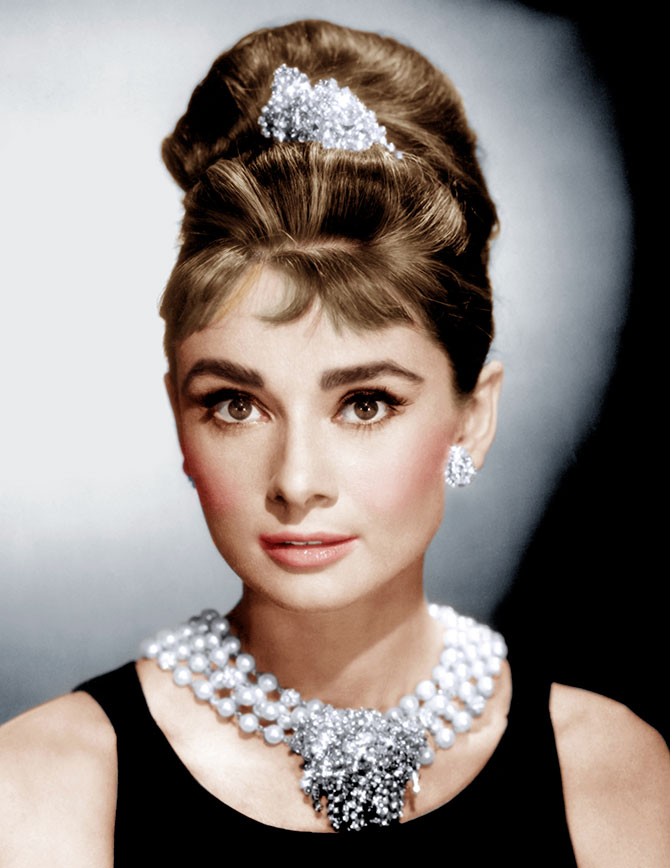 Jacqueline Kennedy appears on the cover of Life magazine in a ­double-strand pearl necklace and goes on to popularize multi-row pearl styles in a variety of lengths.

Breakfast at Tiffany’s arrives in theaters. We reports on the adventures of shooting on location in the Fifth Avenue store. Pearl ­necklace–clad Audrey Hepburn playing Holly Golightly (pictured) becomes one of the pearl industry’s most influential style icons.

Jewelers’ Circular-Keystone reports on the debut of “nursery grown fresh water [sic] natural pearls” harvested from oysters grown in Japan’s Lake Biwa that “vary in shape from baroque to round.”

Kittay & Blitz Inc., a New York City pearler, runs an ad in the magazine claiming, “We’re overwhelmed. Our cultured pearl operation is temporarily too successful.” According to the ad, the company’s president “has hurried back to Japan” to replace its wholesale inventory of “the most-wanted, ­popular cultured pearl items.”

The magazine reports on pollution in Ago Bay (“the crop programmed for 1973–1974 is expected to be down another third or so”). 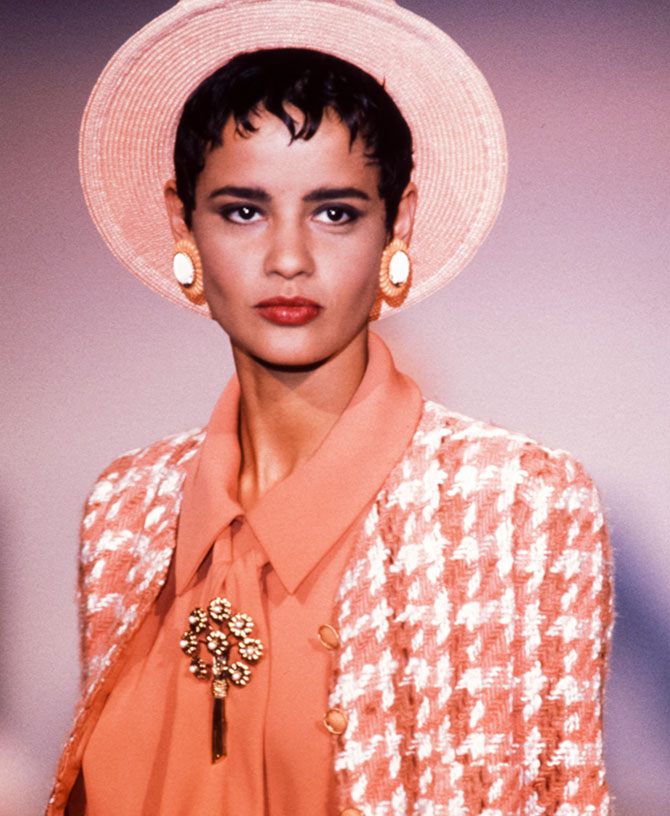 Freshwater cultured pearl farmers in China begin seeding akoya oysters, producing the coveted pearls at a fraction of the price. 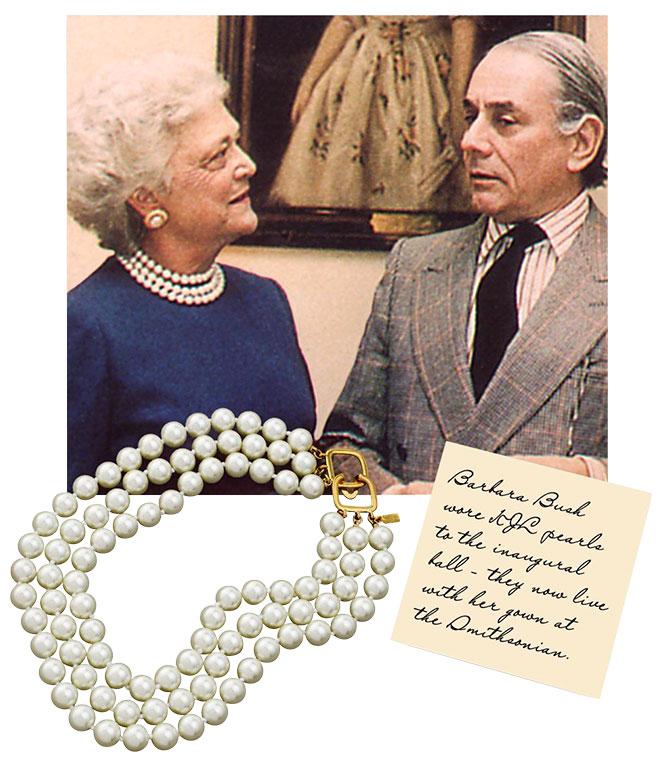 Sotheby’s sells a double strand of natural black and gray Tahitian cultured pearls for $649,000, the highest price ever paid for Tahitians.

Designer Kenneth Jay Lane tells the Chicago Tribune that first lady Barbara Bush’s inauguration necklace—a triple strand of faux pearls—quadrupled sales of his famous fakes. “The demand is so great, it’s as if they just invented the pearl,” he said. “I’ve done pearl necklaces for years and years, but it’s Barbara Bush who has sent pearl sales through the ceiling.”

Gem-quality Chinese cultured freshwater pearls flood the market. “The pearls were small, generally below 7 mm, and the quality was much lower than what we see today,” remembers Joel Schechter, CEO of Honora.

The South Sea Pearl Consortium is formed. The initiative, led by Nicholas Paspaley of Paspaley Pearling Co. and George Kailis of Broome Pearls, both of Australia, is intended to educate retailers and the public on how “to discern the genuine article from inferior imitations,” according to a Women’s Wear Daily report. “Other goals are to increase the gem’s visibility and sales volume worldwide.”

The American Museum of Natural History unveils “Pearls,” an ­exhibit headlined by Elizabeth Taylor’s ­famous La Peregrina, once owned by Queen Mary I.

In the October issue, JCK reports that the “Japanese cultured pearl is having a tough time” and that “Chinese cultured akoyas are not necessarily competing [with Japanese akoyas] on quality—just on size and quantity.”

In the wake of the financial crisis, the pearl industry, among other categories, takes a dip. But it recovers quickly, thanks in part to the CPAA’s efforts to educate retailers on the variety of pearls available on the market.

In September, JCK reports on Edison pearls, aka Ming pearls, coming to market, describing them as “fresh­waters that are round to baroque in shape, and available in white to natural lavender-peach colors with golden to bronze top hues. All these varieties have, not surprisingly, led to a greater appreciation of pearls among designers.”

With the 2020 presidential election on the horizon, the climate crisis is a hot-button topic, and the pearl industry is paying attention. The increased frequency of typhoons and hurricanes, pollution, and rising water temperatures all affect pearl harvests. Still, the pearl industry has proved itself nimble in the wake of environmental stresses for more than a century. Let’s hope a silver lining—or oyster lip, as the case may be—presents itself soon.