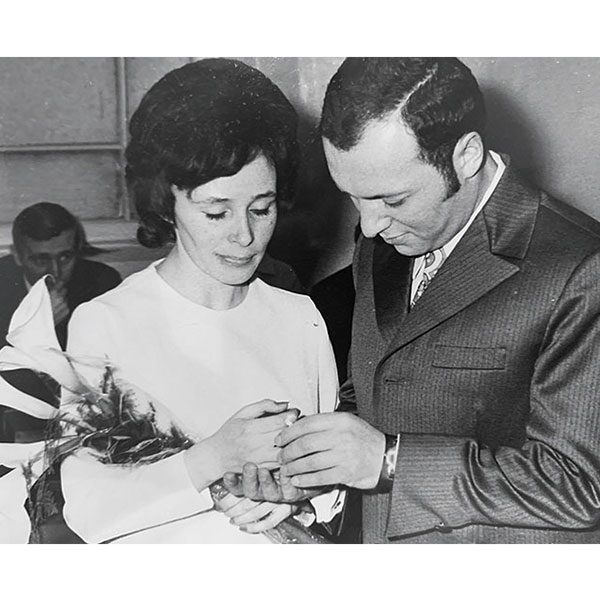 The most revealing thing we discovered when we surveyed the reigning engagement ring styles of the past 150 years? How many would be coveted—and considered marketable—today. 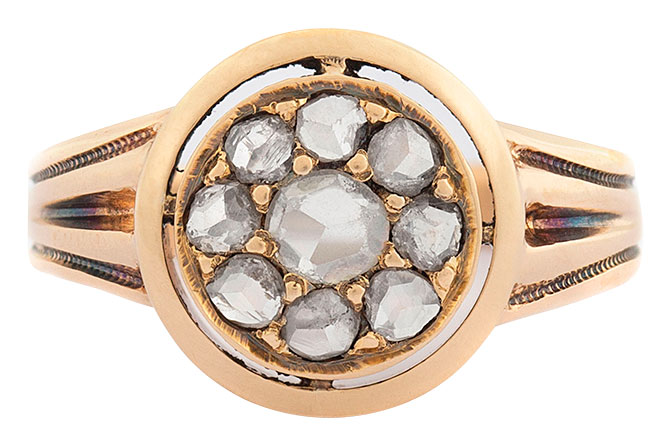 The discovery of diamonds in South Africa in 1867 floods the market with rose-, old mine–, and old European–cut stones. Snake motifs—popularized by Queen Victoria herself—are de rigueur, as are colored gemstones such as turquoise, opal, sapphire, ruby, garnet, and amethyst. In 1886, Tiffany & Co. introduces its famous Tiffany setting, which features the diamond perched high above the finger with six unobtrusive V-shape prongs securing it in place. The setting effectively makes the gem, not the metalwork, the star of the show. 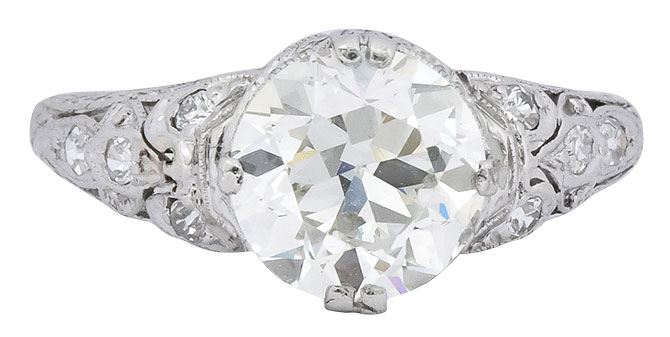 Advances in metal fabrication allow for the use of platinum in jewelry. Because of the metal’s strength, jewelers can produce more intricate, detailed pieces that are also structurally sound. Designs that emphasize light, airy openwork incorporate milgraining and filigree, floral and nature motifs, and bows. In 1902, the Royal Asscher Diamond Co. invents the Asscher cut, but it won’t gain popularity until the 1920s, when Art Deco takes off. 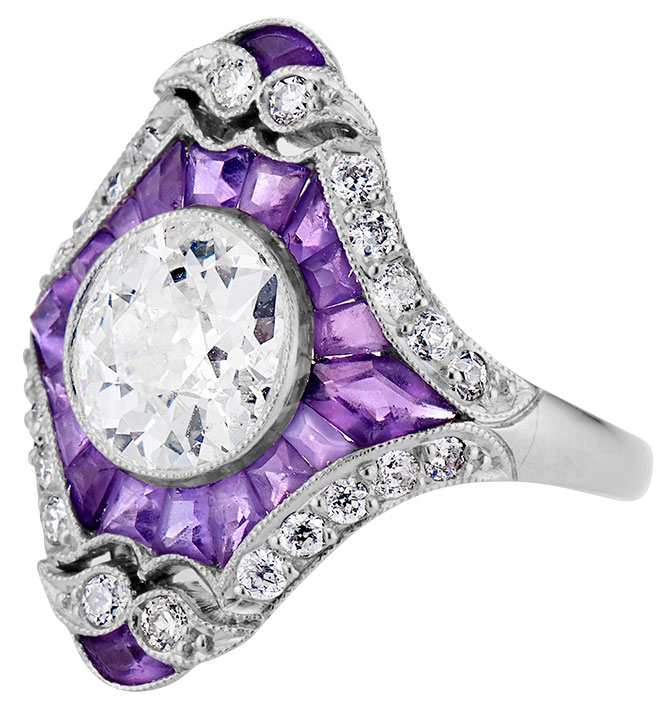 The Art Deco design movement begins, inspiring engagement rings with sleek motifs and clean, crisp lines. Elements of Egyptian revival emerge in the wake of the opening of Tutankhamen’s tomb in 1922. Calibré-cut sapphires, rubies, emeralds, and other colored gemstone accents supply splashes of color to the old European–cut and emerald-cut diamond rings of the day. For the first time, ­baguette-cut diamonds appeal to consumers
seeking a modern aesthetic. 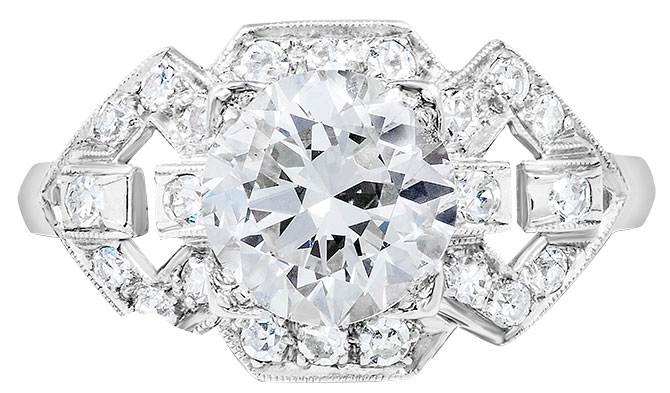 The second decade of Art Deco style is marked by engagement ring designs featuring multistone settings in graphic geometric configurations. During the Great Depression, proportions scale down and carat weights decrease. The Chrysler Building’s glittering spire and other architectural inspirations are highly influential. Hollywood stars such as Gloria Swanson, Myrna Loy, and Carole Lombard are photographed wearing jewels in films, becoming the first celebrities to dictate trends to consumers. 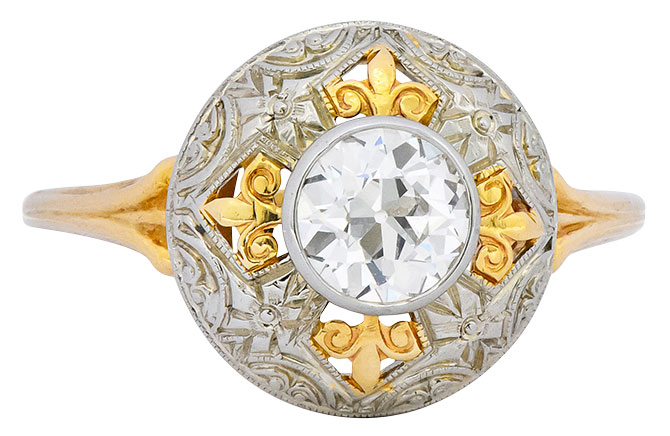 During World War II, platinum is requisitioned for military use, so yellow gold becomes the metal of choice for engagement rings in the early and mid-1940s. ­Transitional-cut diamonds begin to outpace the older diamond cuts. Marcel Tolkowsky emigrates from Belgium to the United States in 1940, and his round brilliant diamond-cutting specifications become the gold standard for American jewelers. 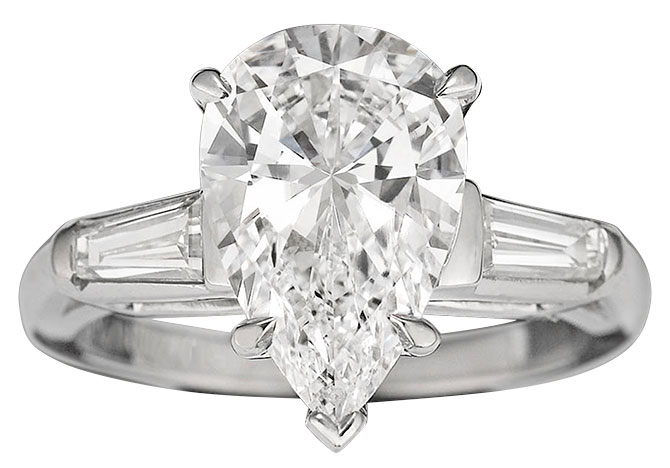 The postwar years are a time of great economic growth that leads to a rise in the upper middle class, which ushers in demand for more glamorous, diamond-centric bridal rings. Emerald-cut diamonds are fashionable, thanks in part to two celebrity engagements: Grace Kelly’s 12 ct. Cartier design from Prince Rainier III of Monaco (1956) and Elizabeth Taylor’s 29.4 ct. ring from Mike Todd (1957). Tapered baguettes officially make their entrance and stick around for a while. 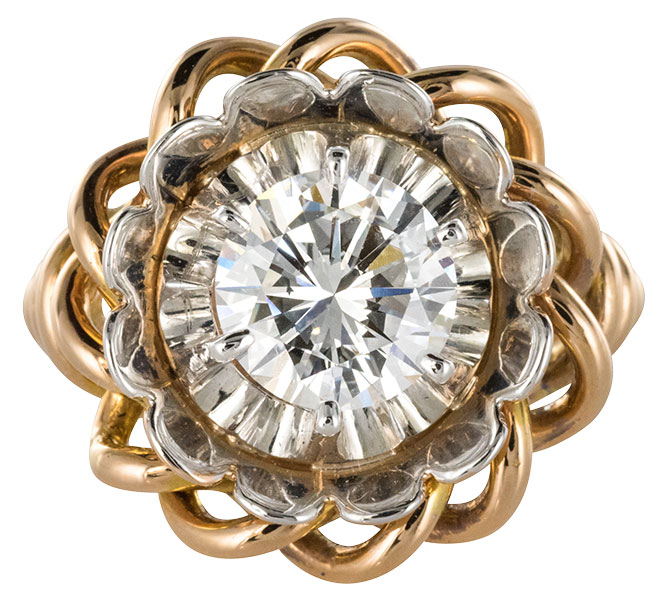 Mall jewelry stores fuel demand for smaller marquise, pear, and round diamond solitaires, while the highest end of the market is dominated by glamazon rings from the likes of Harry Winston, Van Cleef & Arpels, and Cartier. Tricia Nixon’s wedding makes the cover of Life magazine; her ring features a sapphire center flanked by two diamond side stones. 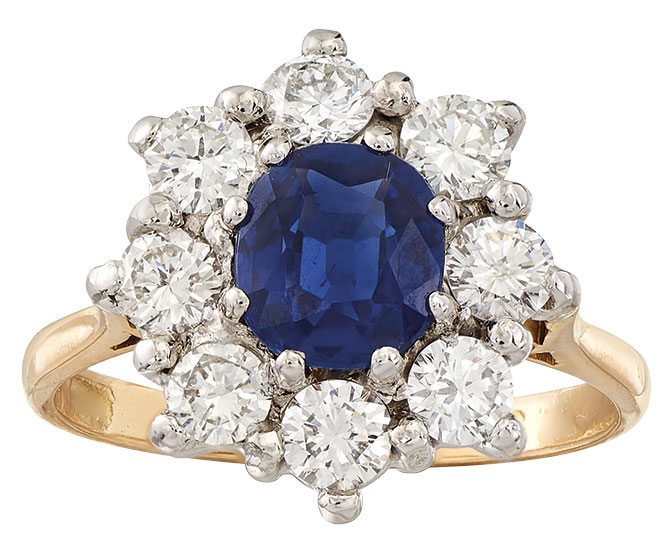 Brides go for the gold. Princess Diana’s oval blue sapphire rimmed in diamonds from crown jeweler Garrard is an easy look for Main Street and mall jewelers to replicate, which they do. Brides are still enchanted by pear shapes and marquise cuts, but the settings are chunkier and bolder. 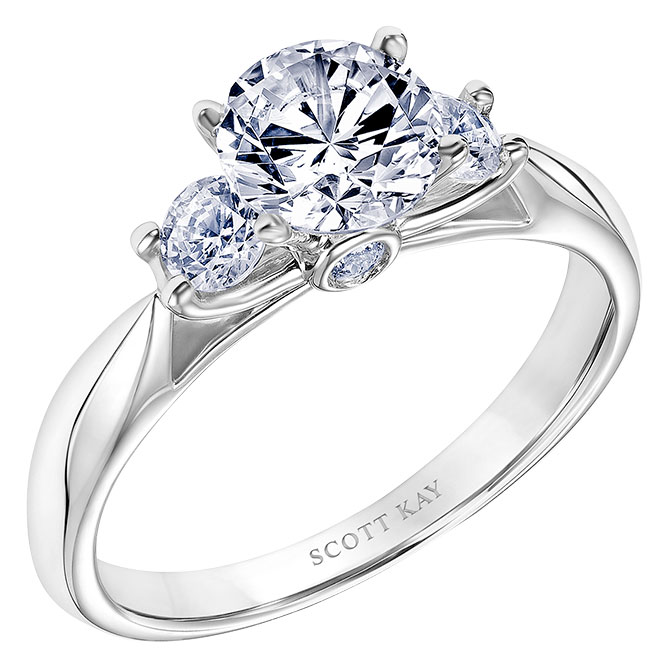 Platinum, platinum, platinum. Thanks in part to an aggressive marketing campaign by the bridal designer Scott Kay, the luxurious white metal has a resurgence and rises in value. Three-stone rings—to represent a couple’s past, present, and future—have a moment. 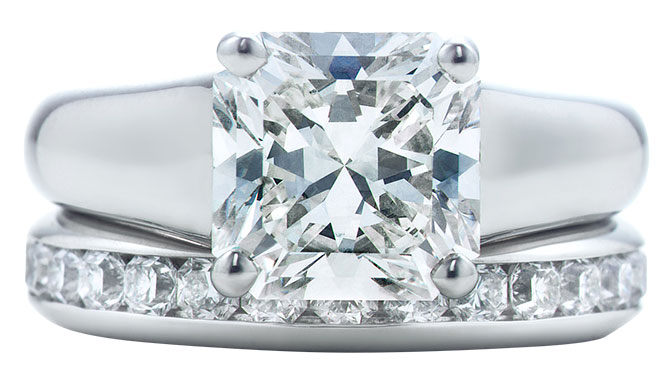 Tiffany & Co. debuts its Lucida diamond, a patented cut that’s a square shape with slightly nipped corners, just in time for millennium proposals. It’s the house’s first engagement ring debut since the Tiffany setting, and its square silhouette triggers increased demand for princess-cut stones at all ends of the market. 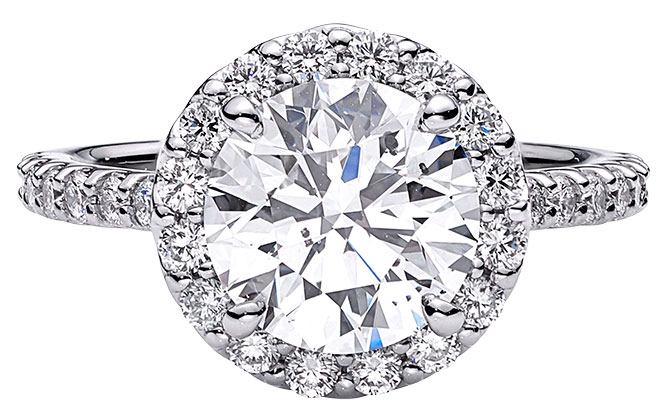 By 2010, halo engagement rings are the new normal. Small or pavé-set stones encircling a modest central diamond create the appearance of a larger solitaire look for less. This message resonates—and spawns a million iterations. Concurrently, Kate Middleton’s engagement ring, which belonged to the late Princess Diana, sparks a mini trend of blue sapphire centers and accents. 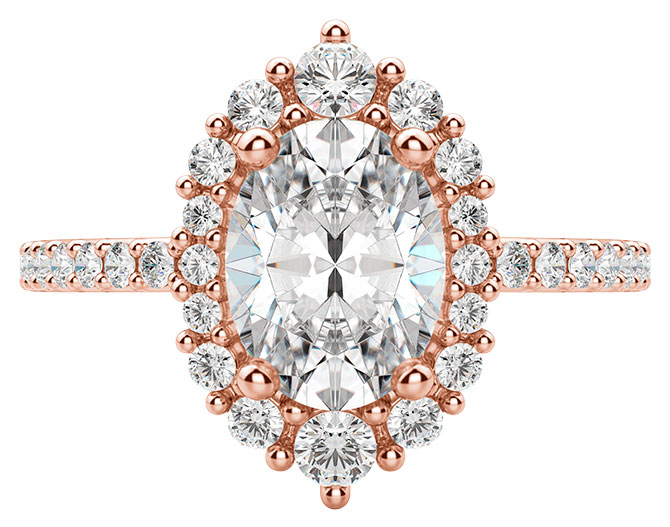