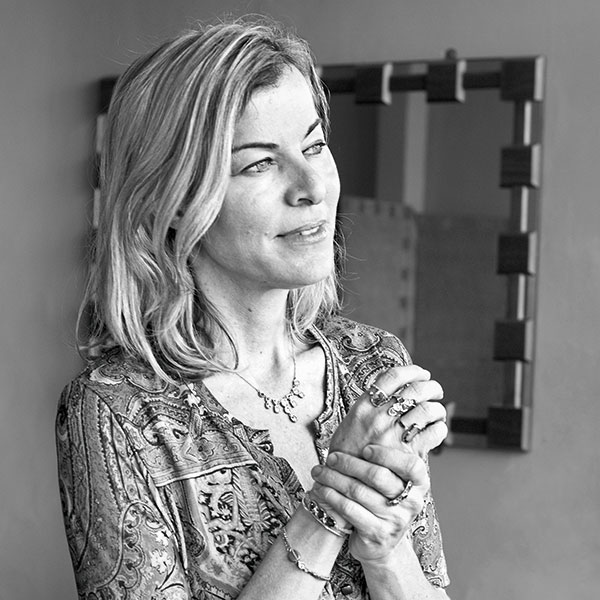 Brooke Gregson builds on her background in textiles to weave together a collection of varying dynamic colors, cuts, and finishes

In her small studio overlooking Los Angeles’ sun-swathed Venice neighborhood, jewelry designer Brooke Gregson is rhapsodizing about boulder opals. “You can actually see nature in them,” she says of the Australian stones with their veins of fossilized sediment. Nearby, a glass-enclosed shelf showcases some of her recent work: a raw diamond set in a pale-blush enamel band, sapphire studs with cascades of delicately knotted gold chains, a pendant necklace of boulder opal (naturally) that resembles the surface of Mars.

The pieces belong to different collections—Gregson creates several each year—but they share a feminine yet earthy ­aesthetic and a soulful appeal. “My clients tend to buy my jewelry because it makes them feel something,” she says. “It’s not just because they saw it in a magazine.”

Growing up with a mother who collected crystals, Gregson came to believe early on in the mystical power of stones. “We had a terrace full of them,” recalls Gregson, an L.A. native. “There was amethyst to protect the home, rose quartz and kunzite to open up the heart and bring love into your life.” Gregson’s father, meanwhile, was a fine jewelry connoisseur who instilled in his daughter an appreciation for technical virtuosity and time-honored methods. His influence is clear in her eponymous line, which is entirely handmade by master craftspeople. Most ­recently, she added an enamel expert to the fold. “The best enamel work has to be done on pure gold that’s been hand-forged,” she explains. “I can tell with my eyes closed when something’s been cast-made.”

Given her gem-centric upbringing, it’s surprising that Gregson didn’t get into the jewelry business sooner. Although she majored in geology at University of California San Diego, she ultimately opted for a different course after graduation. “I thought I wanted to be an artist,” she says.  So she sold her car and moved to London to enroll in Chelsea College of Arts, where she fell hard for postimpressionism and color theory. Eventually she gravitated toward textile design and got a job at a London firm, rising through the ranks to a director role and working with major fashion labels such as Louis Vuitton, Kenzo, Gap, and Marni. The work was creative and exciting but took a toll, stress-wise. “Not only was I designing, but I was selling and hiring as well,” she says. To relax, she began taking jewelry-making classes. “I used it as a release.”

Soon, Gregson was designing pieces for friends on the side. In 2004 she created a collection of necklaces with ­diamond-studded renderings of the zodiac constellations. “I used 14 karat brushed gold, which gave them a textural ­quality,” she says. “I like using different tactile surfaces in my work, probably because of my textile background.”

The Astrology collection, as it became known, was a hit. Trendy L.A. boutique Fred Segal snapped it up. “From the front, it just looks like an abstract cluster of diamonds,” says Gregson of the pendant design, which remains popular today. “It’s only when you flip it over that you see the engraved lines connecting the diamonds to form the zodiac sign.” In other words, the pieces can have a private meaning for their wearer. For Gregson, this was more appealing than anything she felt she could accomplish with textiles. “I realized that jewelry was where it was at for me,” she says, “because it can resonate on a deeper, personal level—whether it’s an astrological sign or a protective symbol or just a feeling.”

But it took another four years and a move back to ­London in 2008 to convince Gregson to pursue a jewelry career full-time. “In Europe, I saw there was a market for what I was doing,” she says. “I had this West Coast vibe, and I was working with a lot of raw diamonds and unique cuts that were still uncommon there.” So she set up shop, creating pieces like bracelets made of gold chain interwoven with silk ribbon and set with moonstones. Before long, storied London ­department stores like Harvey Nichols and Liberty were knocking on her door with orders.

In 2016, Gregson made her way back to Los Angeles to raise her children in a sunny and more familiar environment. But she still carries a torch for her home across the pond. “In London, you can just walk out your door and get inspired,” says the designer, who keeps a studio in the city’s artsy Shoreditch district in addition to her California space in Venice. “I lived a block away from Portobello Market, and I’d go and find the most insane antique jewelry. And the street style was just incredible.”

In a way, it’s fitting that Gregson’s line is based in two cities halfway around the world. After all, her pieces thrive on unlikely pairings—textured and polished surfaces, traditional craftsmanship and New Age spirituality. “I like finding a balance,” she says. “I think people are complex, and I think jewelry should show different layers of character.”

While Gregson does a lot of custom work (including her fair share of engagement rings), she’s always dreaming up her next collection, which arises from whatever themes and visual references are preoccupying her at the moment. A recent rough patch, for instance, inspired a series of protective symbols. “I decided I needed to spend some time healing,” she recalls. “So I did all these watercolors of dream catchers and geometric evil eyes, and the collection grew out of those.” She called it the Talisman series and incorporated diamonds, hand-carved moonstones, and engraved and enamel details.

At present, she’s working on a collection inspired by nature in general and flowers specifically. “I didn’t like flowers two years ago, and now I’m obsessed with them,” she says with a laugh. For research, she’s been looking at the work of artist Line Vautrin and photographs by Karl Blossfeldt. She also takes her sketchbook to the ­Huntington Botanical Gardens in San Marino. “I find myself ­gravitating toward daisies and flowers that have a mandala shape,” she says, referring to the ancient Hindu circular design meant to represent the cosmos.

The new collection, which will incorporate tapered baguettes, unique cabochons, and enamel work, is due out in February—just in time for Gregson’s annual trip to gem week and her exhibit at the JCK Tucson show. The Arizona desert pilgrimage is something of a family affair. “I usually go with my mom and Aunt Pat, who brings a truck and gets all the big crystals,” says Gregson. The three women go their separate ways during the day and reconvene afterward for an impromptu show-and-tell of their finds. “The one year I went alone I was so stressed out and unhappy,” Gregson says. “You find the best stones when you’re enjoying yourself and open.”

In the past, Gregson would come to Tucson with a set agenda. “I was like, ‘Okay, I’m doing this collection and it has to be this way and I have to find these stones,’ ” she says.

However, these days she has a looser idea of what she’s looking for. Opals and raw diamonds, of course, but she leaves room for the random, felicitous encounter.

“With the best stones, I’ll pick them up and get the chills and just know.”