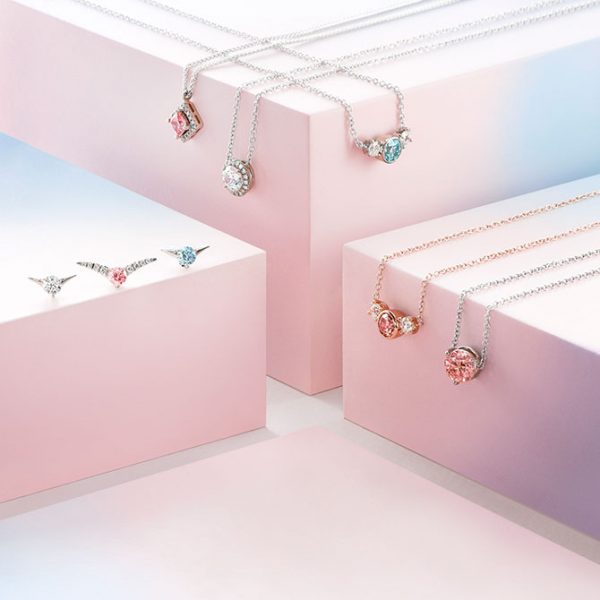 In a move that jolted the diamond market, De Beers—the company that invented the modern diamond industry—has released a line of lab-grown diamonds, called Lightbox Jewelry.

Lightbox features white, pink, and blue stones grown by Element Six, the De Beers–owned synthetic diamond manufacturer, which up to now has grown them solely for industrial purposes.

De Beers is investing $94 million in a new production facility in Gresham, Ore., that will eventually produce as much as 500,000 cts. of lab-grown diamonds a year. That translates to 200,000 cts. of polished. The stones will be polished by a third party, a non-sightholder in India.

The jewelry will be sold only mounted, not as loose, and initially only as earrings and pendant necklaces. All the lab-grown stones will sell for $800 per carat, in 0.25 ct., 0.5 ct., and 1 ct. sizes (some of the pieces are solitaires, others are total weight). Consumers can choose between a mounting in 10k gold for $200 or in silver for $100. None of the brand’s products is bridal-oriented. Initially, the diamonds will be sold only online at the Lightbox site, though Lightbox plans a retail test with select brick-and-mortar partners sometime this year.

Given the nature of this announcement, De Beers is taking pains to separate its new product from traditional natural gems. Lightbox is a distinct company; De Beers’ name will not appear in its ads. All the diamonds from 0.2 ct. up are marked by a newly developed permanent inscription that can’t be polished off. The diamonds will not be graded, as De Beers feels manufactured products don’t deserve grades.

Lightbox head of marketing Sally Morrison says the brand was created because De Beers saw an opportunity in the market, based on extensive consumer research. “When we
talked to [focus] groups, it was clear they wanted [lab-grown diamonds] to be for less serious occasions, more fashion, more fun,” she says. “Lightbox is for people who want an accessible, fun piece of jewelry.”

Morrison doesn’t consider the new line as competition for natural diamonds, noting that the company sees that market as something different.

Still, the announcement was the talk of JCK Las Vegas and garnered a wide range of reactions.

Diamond growers were surprisingly circumspect, given that the new venture undercuts current lab-grown pricing by as much as 75 percent.

“They are clearly trying to disrupt lab-grown,” says Clive Hill, president of WD Lab Grown Diamonds. “I cannot ever recall a product launch talked down so much by the launchers.”

But Hill believes De Beers’ announcement will boost his own lab-grown diamonds. “This undermines the brand De Beers built over 100 years by reversing the marketing message for their product.”

Max Rogers, sales associate with Kenny G & Co. Fine Jewelers in Citrus Heights, Calif., thinks De Beers is making a smart move. “They are trying to crush the lab-grown business in its tracks,” he says. “How do you do that? You get in the business and lower the prices.” He adds: “There will always be a customer for lab-grown and moissanite, but it’s not a diamond customer.”