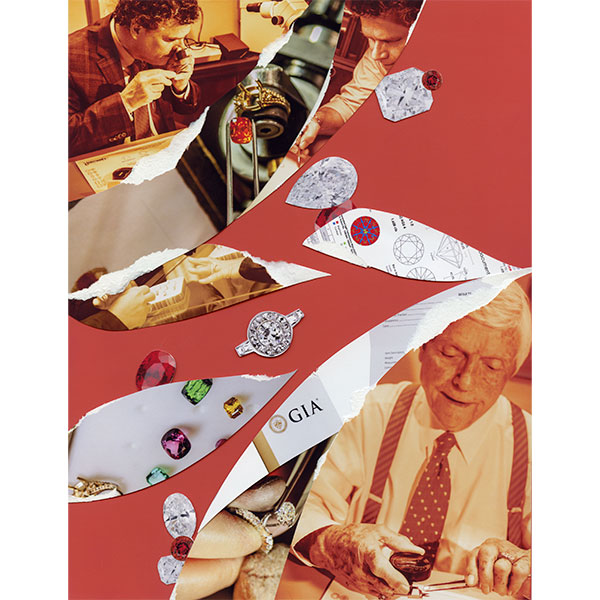 The Information Age has unfolded across generations of JCK readers, and in few product categories has that proved as consequential as in gems. Over the decades, customers have evolved from buying diamonds and colored stones essentially on blind faith to researching diamonds with laser-inscribed grading report serial numbers and comparison shopping them, instantly, online.

“In the very early days, before the GIA Lab was even founded, there was no one with authority and expertise,” recalls Bill Underwood, who founded Underwoods Fine Jewelers in Fayetteville, Ark., in 1957, and as a former American Gem Society president led industry efforts to standardize diamond grading. “There were so-called diamond certs, but in many cases they were fraudulent. If a diamond had a cert, it was suspicious.”

That all changed in 1955, when GIA issued its first diamond grading report. Robert M. Shipley had established GIA in 1931 and spent the next two decades developing methodologies for scientifically describing diamonds. In 1953, the succeeding executive director, Richard T. Liddicoat, codified that work into the GIA Four Cs grading system, standardizing diamond grading and paving the way for reports. Still, universal recognition among consumers remained decades away.

“It took decades before GIA became a household name,” says Long’s Jewelers CEO Bob Rotten­berg, who followed his father and grand­father into the business in Boston. “In the mid-’60s, although the GIA was out there, it was still the Wild West. Descriptions remained very vague, like Top Wesselton or Exceptional white for color.”

Demand for reports was simply not there. “When we opened in 1978, the consumer did not rely on diamond grading reports,” adds Lee Berg, a former Zale Corp. exec who founded nine-store Lee Michaels Fine Jewelry in Baton Rouge, La. “Only if it was a big diamond with exceptional qualities—4 carats and above and of exceptional color and clarity—would you put a report to it. For the vast majority, it was good, better, best.”

As the market expanded through the 1970s and into the ’80s, the trade, including scientists at GIA and elsewhere, became aware of an onslaught of treatments developed to enhance a diamond’s apparent quality—processes such as laser drilling, fracture filling, and chemical vapor deposition, followed later by irradiation and high-pressure, high-temperature annealing. For the most part, these became concerns within the trade even as they remained a nonissue among end customers.

“Most consumers remain more concerned with what they’re buying, whether they’re getting a good value, and dealing with a reputable source,” Berg says.

But the dawn of treatments did spawn a proliferation of diamond grading labs, many situated in the world’s principal diamond trading hub, Antwerp. The Belgian city witnessed the opening of the state-sponsored Diamond High Council (HRD) lab in 1973, plus the private European Gemological Laboratory (EGL) in 1974 and International Gemological Institute (IGI) in 1975. The tail wagged the dog, and the increase in available reports finally sparked traction at the consumer level.

“The ’80s is the earliest I can remember customers voluntarily asking about reports and information,” Underwood says.

It wasn’t long before retailers began voicing concerns about the disparities in grading among the new labs, which seemed to be muddying the waters rather than increasing transparency. Many believed less scrupulous dealers and retailers were chasing the highest possible grades by submitting stones to multiple labs, since most facilities had adopted grading scales similar to GIA’s. Questions arose as to whether the various issuers had consumers’ best interests in mind or were primarily concerned with cashing in on the profitability of selling paper.

“All jewelers buy diamonds using GIA standards,” Rottenberg says. “But some began to take advantage of the market by using the same letters and descriptions but a lesser standard. By offering false value, those sellers could beat the jeweler who was sticking to the higher standard.”

When the internet arrived in the mid-1990s, it ­instantaneously brought greater ­transparency to the entire ­diamond-buying process and ­exposed discrepancies among the various reports.

“Ultimately, the unscrupulous sellers shot themselves in the foot,” says Rottenberg. “People could buy and compare diamonds online and learn to compare standards of IGI, EGL, and HRD to GIA. Boomers are now selling their diamonds and finding out what they really have compared to what they thought they had.”

The advent of the World Wide Web helped a new generation of diamond customers gain greater power over their shopping experiences. “The consumer ­today is much better educated because of the internet,” Berg says. “They’ve already ­researched diamonds and know much more about grading reports than the consumer of 30 years ago. And they have more ­confidence in what they’re buying.”

Today’s consumers are taking advantage of their ability to ­obtain grading report numbers and compare apples to apples. “People shopping around cert numbers makes sense,” says Craig Underwood, who succeeded his father as president of Underwoods and has chaired the AGS Laboratory Gemological Committee and Diamond Standards Committee. “If you go to Tiffany, for example, and see a diamond on memo with a GIA number on it, you might find that exact same laser number somewhere else for less. You can bypass the system.”

But the ease with which the internet enables consumers to comparison shop, using reports and price lists like Rapaport, has taken a drastic toll on jewelers’ margins. Few people would deny that the industry’s long-standing fear of commoditization has come to fruition.

“The historically large markup on diamonds has opened the door for a Blue Nile or James Avery to cut traditional margins in half and still cover expenses,” says Judd Rottenberg, Bob’s son and a principal at Long’s.

“We’ve had to lower our margins across the board to ensure we’re competitive,” adds Lee Berg’s son Ryan, who serves as Lee Michaels’ market president.

With colored stones, report usage has evolved differently. That market has always been much smaller than the diamond market. And colored stone customers—typically more experienced than diamond buyers—are often considered aficionados, limiting the use of colored stone grading reports to high-end goods.

“For anything $20,000 and under, it’s really not a part of it,” says Ryan Berg. “But we’ve sold six-figure colored stone pieces, and those have certificates. At that level, the consumer wants to know if there’s been any type of treatment.”

For such higher-end colored stones, reports are also valuable in providing customers information on origin, helping to drive up premiums for gems from coveted places, such as rubies from Mogok, Burma (Myanmar). “There is an expense to it, but it’s great when you can tell the story and journey,” Judd Rottenberg says.

Even with today’s heightened knowledge among consumers and reliance on ­reports, however, jewelers tell JCK that their expertise continues to outweigh such considerations in closing the majority of gem sales.

“We can’t just depend on reports to sell product,” Judd Rottenberg says. “People buy diamonds because they’re pretty, not because they come with a piece of paper.”