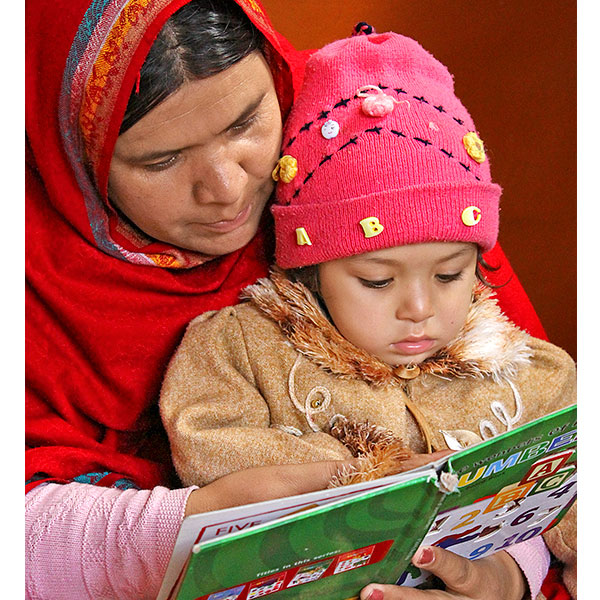 In 2006, diamond supplier and philanthropist Nasruddin Rupani, president of Houston-based World’s Gold & Diamonds Inc., established the Rupani Foundation to educate and support economically vulnerable workers in Afghanistan, Tajikistan, and his native Pakistan on how to mine for gems and make a better living through mining.

But the living conditions he saw among the workers and their families prompted him to launch a second initiative, Informed Parents, that benefits mothers and children in these remote, mountainous areas.

The locations in South and Central Asia “are the most remote communities in the world, where these mothers and children have no access to education,” Rupani says. Poor sanitation and unhealthful practices—such as living with livestock inside the house and breathing in the smoke of indoor fires—also contribute to the people’s vulnerability, he adds.

Focusing squarely on the health and development of young children, the initiative strives to educate mothers on crucial matters of early childhood development. This includes teaching them how brains develop in the womb and in the first years of life, and the role nutrition plays in that development.

The lessons are based on the Montessori school of early-childhood education, which promotes child-led learning using age-­appropriate materials. “When I learned about Montessori, I thought, These communities need this,” Rupani says. Like founder Maria Montessori, he believes “the entire foundation of the child starts in the mother’s womb.”

That conviction has propelled the initiative into small mountainous villages in a vehicle the philanthropist describes as an “early-­childhood development center on wheels.” The welcome from locals, Rupani says, is usually very warm. “They are excited to learn,” he says, adding that he hopes the program can eventually scale up to support more families.

Children who benefit from the program are followed and supported from conception until age 4. At that point, the hope is that the mother has acquired the tools to not only keep her children safe and healthy but also teach them crucial life skills, including basic English (which the program teaches its mothers).

Informed Parents also brings Montessori education on early-childhood development to mothers and children in the United States—specifically to recent immigrants, refugees, and undocumented people who often come to America with scant material possessions, resources, and emotional reserves. In its U.S. efforts, Informed Parents operates out of community rooms at low-income apartment complexes, filling the void in day care, which is financially out of reach for so many.

“We spend at least two hours with them every time,” Rupani says. “When the mother goes home, she’s practicing what she’s learned and becoming a teacher at home. We start with the child, then we go to the mother, then we go to the family. Eventually we see the whole community change.”

Top: A grandmother and grandchild, members of the early-childhood development program, in Gilgit