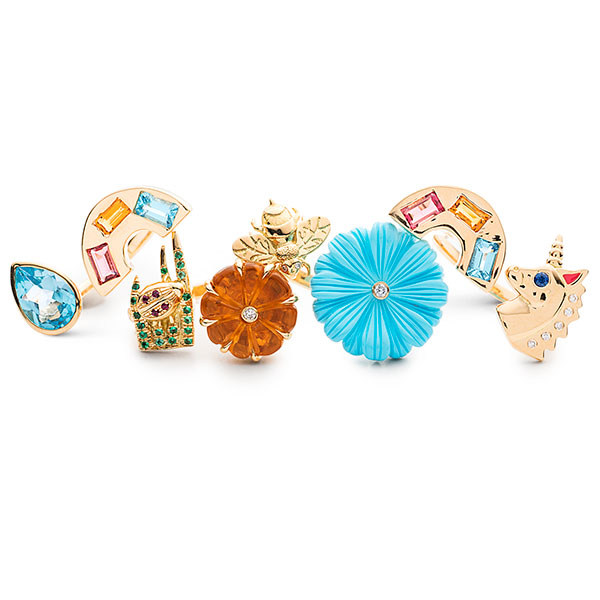 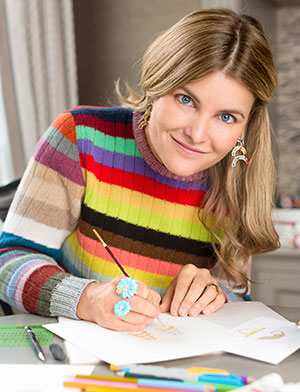 Pack up your troubles and just get happy. Jewelry designer Brent Neale is going to chase all your cares away.

As a senior at Johns Hopkins University, Martha Brent Neale once interviewed at Morgan Stanley. Stepping up to its midtown Manhattan building, a monolith of glass and lines, dressed in a navy Theory suit and a chunky multistrand Peruvian opal necklace, she was nervous and a little unsure of what she was doing. After all, she had her sights set on law. But her sister, a trader, had persuaded her to look into finance. It turns out the headhunter would offer a third option. When complimented on the bijoux, Neale revealed that she made it herself. The response: “What are you doing here? You should really be doing that.”

“Oh, yeah, sure,” the Baltimore native recalls of her reaction, between bites of Baltimore Crab Cakes at the Madison Avenue outpost of Freds at Barneys New York. “Being a jewelry designer? That was never something I thought of as a career path.” She chuckles at the memory. “I really should look up the recruiter’s name.”

Today Neale is a jewelry designer who has more than a decade’s worth of experience under her belt and this May celebrated the one-year anniversary of her debut collection, Brent Neale. (“Everyone in my family goes by their middle name,” she explains of the MIA “Martha.”) In fact, we’re meeting at Barneys because it’s one of her key retailers; her designs, a joyous cocktail of color and whimsy in mushroom pendants and unicorn studs, are displayed right by the entrance—prime real estate for a young label.

Even if Neale never set out to be a jewelry designer—each step of her career has its share of happenstance, one learns—the signs were there. During college, she accompanied her “crafty” and antiques-loving mother to gem shows outside of Washington, D.C. And her sister in New York City, having noticed Neale’s subsequent interest in beading, directed her to the bead emporiums in the Garment District whenever Neale visited. That’s how she began dabbling in jewelry as a hobby—nothing serious, though, just “stringing and wire-wrapping and stuff like that.”

Months after her fleeting brush with finance—spoiler: She didn’t get the job—Neale took a summer gig at Bonne Nuit, an East Hampton shop owned by a family friend, which occasionally sold her wares. She was on duty the day a woman came in, inquiring about the necklaces. Neale ­introduced herself as the designer and soon had a job offer; the customer owned a company that made private-label jewelry for big-box retailers. Neale spent two and a half years with the firm, Horizon Group, before enrolling in the jewelry design program at the Fashion Institute of Technology to acquire the technical skills she couldn’t pick up on her own.

Kismet struck again during her second year at FIT when she met jewelry designer Kara Ross at a wedding—Neale’s then-boyfriend, now her husband, is friends with Ross’ brother—which resulted in an internship with Ross’ company and, after graduating in 2007, a full-time job. She spent eight years there, climbing her way up to jewelry director and working on everything from the launch of costume—Ross’ answer to the skyrocketing price of gold in 2008—to designer collaborations with J. Mendel, Naeem Khan, and Tory Burch. “Kara is a force of nature,” gushes Neale. “And when you work for her, the relationship is more than just employee-employer—she’s a cheerleader, very giving and encouraging. She’s like that with everyone at her company.”

Neale acknowledges it was hard to go from a tight-knit family environment, with a mentor like Ross, to a solo act. And she admits branching off was never part of the game plan. “I liked being part of a team, and I loved working for her,” Neale says. “When you work for yourself, you’re not just a jewelry designer; you’re a business owner and have to think about accounting, inventory, hiring people.… It’s a lot. I wasn’t sure I ever wanted to do that.”

What changed her mind? She had a son in 2013 and, two years later, twin daughters. While Neale came back to work after the first pregnancy, the second proved harder—she was deemed high-risk and had to go on bed rest. So she trained her replacement and officially left Ross in July 2015. “I didn’t really have a choice,” Neale says. “I was going to have three kids, all under 3, and I didn’t want to miss this time with them.”

More than a year in, sensing she was going stir-crazy, her husband suggested she start sketching again. So she did, whipping up an initial drawing of a rainbow ring, a spectrum of brightly colored gemstones bursting from an opal cloud—it’s a signature now and perfectly encapsulates the buoyant, playful vibe of her line. Asked about the inspiration, Neale doesn’t mince words. “That was a really tough year,” she says. “The girls were premature and in the hospital for two months. It’s a horrible feeling not being able to bring them home and not knowing if they’re going to be okay. I told myself, If I am going to do my own thing, then I want to make people feel happy.” She named her first offerings After the Rain.

She has since expanded her range, priced from $1,000 up to $12,000, but continues with the through-line of optimism, color, and delight: turquoise wildflowers dotted with diamonds and a tiny bee; kaleidoscopic ammonite pendants; malachite mushrooms with gemstone “spots”; carved doors inspired by entrances she’s seen in her travels, from Rome (lapis) to the Bahamas (turquoise, with gold hummingbirds). Her next collection, for fall, is inspired by traditional Danish still lifes—exuberant blooms in vases, a mix of colors in stones. It’s easy to see the appeal: Neale’s jewelry offers an escape, and a hit of happiness and ­fantasy—without the hangover. So far, she has nine accounts nationwide, including Forty Five Ten in Texas, Elizabeth Bruns in North Carolina, and online ­destinations Moda Operandi and Auverture. “Kara taught me the importance of the right retail partners,” Neale says. “You can’t be everything to everyone. You’ll be doing ­yourself a disservice. Because then your voice gets lost.

“In the back of my mind, I always hear her: ‘Do you love this? Do you really love this?’ ” Neale continues. “Kara would tell me to keep things fresh but at the same time, when you’re designing, you can get carried away. She’d draw it back. ‘You
have to love it. If you don’t love it, don’t put it out there.’ ”

Another great lesson Neale picked up from Ross was the importance of private clientele. “If your business is 100 percent wholesale, where so much of it is consignment,” she explains, “I don’t know how you can make it.” Enter Instagram, which wasn’t a force during her days working for Ross but has been a boon in expanding Neale’s customer base. Three months after her debut, Neale sold her first item—a four-figure rainbow ring—on the social media platform to a follower who direct-messaged her while lunching with a friend on the Upper East Side. The designer dispatched an intern to the restaurant with the ring (and a portable credit card reader)—and the woman bought it on the spot.

“It is immediate,” Neale says, adding that she nets, on average, about a sale a week or more on Instagram. “And, remember, this is fine jewelry. It’s awesome—I don’t have my own store, so this lets me have a direct relationship to people.” Her retailers are reaping the benefits as well. The week before this interview, she sent a follower who liked an earring she posted to Barneys. In 48 hours, the client bought a pair—and sent Neale a selfie wearing them.

In fact, throughout our conversation, Neale’s phone has been buzzing nonstop. She’s polite about it, profusely apologizing for the interruptions. One wonders if it’s her children or a work emergency. It’s the latter, sort of. As a largely one-woman operation, Neale isn’t just the designer and the business head—she’s customer service as well. Those texts she’s been getting? They’re from private clients. “If people aren’t happy,” Neale says, “they won’t come back to you. And my jewelry is about making people smile.”