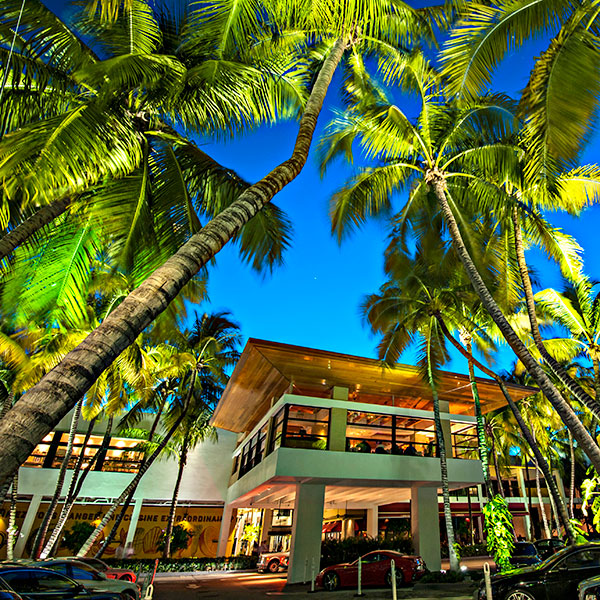 “Put this on,” says Bobby Shafer, a ­dapper-suited sales associate at the Gucci boutique at Miami’s Bal Harbour Shops, as he spritzes a silk ribbon with the brand’s latest fragrance, Bloom. He ties the perfumed ribbon around my wrist and clasps both my hands lightly. “Now you can get into any club in South Beach,” he says, flashing a ­thousand-watt smile. “Tell the doormen Bobby sent you.”

Tickled by this clever customer service, I float out into the mall’s main thoroughfare, where salty breezes from the nearby Atlantic Ocean softly circulate, commingling with the delicious scents of pricey artisanal candles burning at Diptyque, Santa Maria Novella, and other rarefied lifestyle brands with intentionally anemic retail portfolios. I flash back to an hour ago, when I’d downed a cone of bright pink gelato that tasted like fresh strawberries—only better—from Bianco Gelato on the floor above.

Gazing down to the ground floor, beneath the diamond-studded windows of a Graff boutique, I spy a family of turtles with shells the size of tennis racket heads sunbathing on rocks in a pond glinting with koi fish. It’s official, I think. I’m in retail heaven. 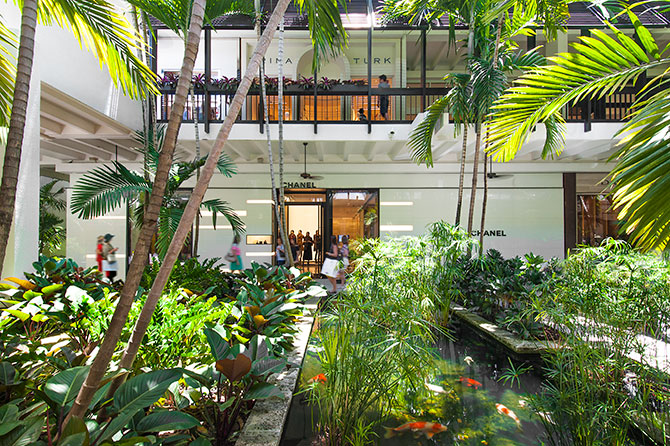 Bal Harbour Shops’ clientele is 65 percent international—hailing largely from Brazil, Mexico, Colombia, Russia, and Canada. Many of those shoppers maintain a second home in Miami.

Since opening in 1965 in Bal Harbour, a village located at the northern tip of Miami Beach, on land formerly used for World War II military barracks, Bal Harbour Shops has remained this way: airy, serene, and uncommonly luxurious. The developer, Stanley Whitman (son of a Chicago businessman), bucked the real estate trends of the day, most of which exalted the indoor mall, since air conditioning was considered new and exciting. Decades before open-air malls became showpieces of retail developers such as Caruso and Macerich, Whitman was determined to make Miami’s famously balmy climate an asset in his retail environment. He even reportedly configured the elevation of the Shops’ grounds to achieve the maximum flow of beach wind.

Even more fundamental to his concept was attracting a collection of upscale brands. “Mr. Whitman had the vision of having the property be total luxury, and that standard has always been upheld,” says Gotmar Giron, director of public relations and special events for Bal Harbour Shops. And Whitman made it happen: He persuaded Neiman Marcus to open its first store outside of Texas at the Shops in 1971, which had a ripple effect. (The founder passed away in 2017 at 98; his grandson Matthew Whitman Lazenby now serves as president and CEO of the ­family-owned business, Whitman Family Development.)

Today the mall boasts more high-end brands under one (metaphorical) roof than nearly any other shopping center in America. Think of it as a more humid Rodeo Drive, without the paparazzi gaggles and valet lines. Bal Harbour Shops currently has around 100 tenants—Giron says there’s always a waiting list and “every square inch of the Shops is leased at all times”—and many of the brands represented compose the top 1 percent of luxury labels.

“Many stores in the Shops need more space,” she explains. And soon they’ll get it.

The intimate-feeling shopping center is in the midst of its biggest-ever expansion: a $400 million, 350,000-square-foot addition that will roll out in three stages in the next six to eight years. It will make room for roughly 70 new boutiques and a 53,000-square-foot Barneys New York (the first in Florida), housing its popular Freds restaurant. Barneys will become the Shops’ third anchor, joining Neiman Marcus and Saks Fifth Avenue, which opened in 1976. The new development is set to swallow a large parking lot and transform the mall’s third floor, which had been used mainly for storage and only recently welcomed its first tenants.

In Green Street Advisors’ 2016 report (its latest) on the top 10 malls in the United States by sales, the 520,000-square-foot Shops took the No. 1 spot with a stunning $3,185 in sales per square foot. For comparison, local rival the Aventura Mall came in at fifth place, with $1,595 in sales per square foot, and the average for U.S. malls was under $1,000. More recently, Whitman ­revealed that per-square-foot sales for January 2018 were up 23 percent from the previous January.  And according to the company, sales at Bal Harbour Shops have increased every single year since its opening in 1965, with two exceptions: the period following the 9/11 terrorist attacks and the 2008 economic recession.

Yet sales alone don’t reel in this caliber of brands. Because the center is a destination, opening a store within its lushly landscaped halls offers companies instant exposure—and the chance to align their brand with some of the swankiest on the planet. The idea that a mall—a shell for tenants, really—can elevate a brand simply by housing it may sound like fiction in 2019. But Bal Harbour is one of the few remaining properties still possessing that retail fairy dust.

I cap off my morning of wandering around the center with lunch at Carpaccio—easily the scene-iest restaurant of the Shops’ six eateries. From my patio perch, surrounded by an array of garrulous, beautifully dressed diners, I have a clear view of the “premium” parking lot, home of a popular annual collectible and exotic car show (and a general see-and-be-seen spot for luxury-car lovers).

A young, tall waiter soon appears at my side. “What’s good here?” I ask with a smile, trying not to get distracted by the parade of shiny Beamers, Mercedes, Range Rovers, and classic muscle cars slipping in and out of the lot. He looks bemused at the question. “Everything,” he firmly states. And I believe him.