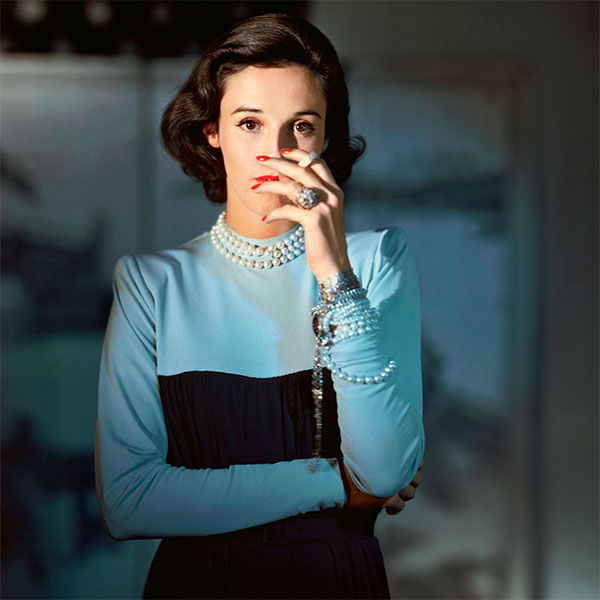 Of socialite/style icon Babe Paley, Oscar de la Renta once raved: “Whatever she wore, she wore in a way you would never forget.”

Barbara “Babe” Cushing Mortimer Paley was destined for the fashionable life. Born to a world-renowned surgeon with sisters who married into the Astor and Roosevelt families (they were known as the “fabulous Cushing sisters”), Paley reigned supreme in New York society. After a stint as an editor at Vogue, she left to marry her second husband, CBS founder William S. Paley. Yet she never strayed far from haute couture fashion and fine jewelry, modeling occasionally and remaining on best-dressed lists throughout her life. In this 1946 photograph for Vogue, there is a haunting sadness in Paley’s eyes—though she is arrestingly beautiful in a rayon jersey Traina-Norell dress, strands upon strands of pearls, and a cocktail ring. Like this photo, Paley’s life appeared to be a series of contradictions. Verdura and Schlumberger were her favorite jewelers, but she wasn’t above wearing costume pieces. Her husband was a philanderer and prone to rages—which no doubt filled her days with heartbreak—yet she was posh, privileged, and everyone’s aspirational ideal. Even her enemies were awed. “Mrs. P had only one fault,” said Truman Capote, who famously betrayed her confidences, causing her to drop him as a friend. “She was perfect. Otherwise, she was perfect.”