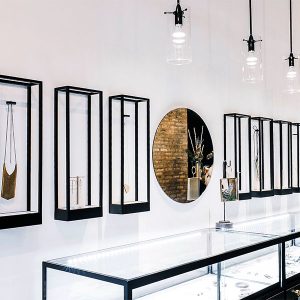 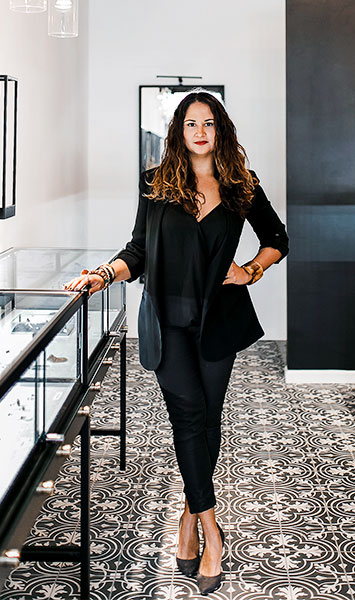 Adornment + Theory, Viviana Langhoff’s retail shop in Chicago’s Logan Square neighborhood, exudes the hip, diverse character that resides beyond its sleek glass door. The narrow 750-square-foot space is unapologetically modern with a crisp black-and-white color scheme accented by flashes of gold, ­undeniably urban with its exposed brick wall and silver tin ceiling, and a thoughtfully curated mash-up of Langhoff’s wide-ranging interests. Born in Puerto Rico and raised in Florida, she ventured north to Chicago to attend the renowned School of the Art Institute and professes a deep interest in jewelry history, especially Middle Eastern history and art. “Glam, Moroccan, art deco” is how Langhoff describes the vibe of the lively retail space she opened in October 2017 following a decade-long run working for others, including a contemporary jewelry gallery. 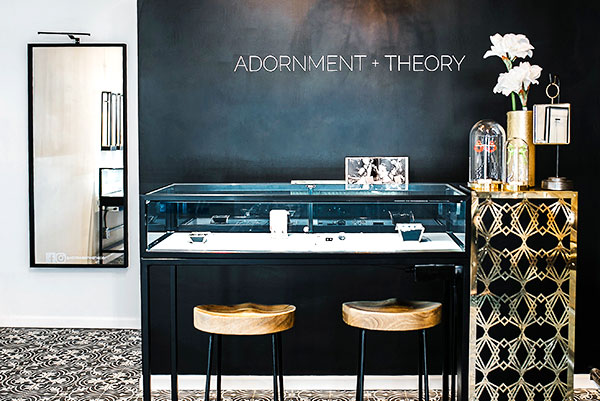 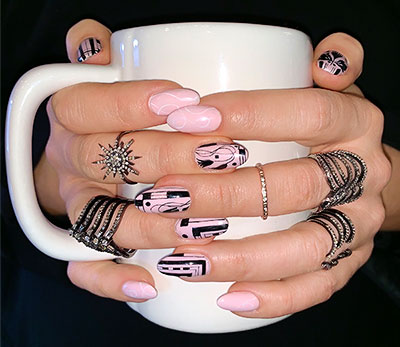 Four glass cases running along the showroom’s eastern wall host the bulk of Adornment + Theory’s jewelry inventory. Priced from $50 to $400, functional art designs from a rotating group of about a dozen emerging artists Langhoff has personally selected—she favors women and, specifically, women of color—include necklaces, earrings, and rings for everyday wear. “It’s product you can’t find just anywhere,” she says, pointing to Laura Wood’s whimsical, kinetic styles as an example of the distinctive pieces Adornment + Theory seeks. An elevated glass case in the rear of the showroom, meanwhile, features Langhoff’s own vintage-inspired fine jewelry, which relies on intricate metalwork, alternative colorways, and fair-trade gems, and works from a half-dozen other artists, among them Sarah Swell and Sofia Zakia. Prices start at $750 and climb as high as $7,000. “We’re not a traditional fine jewelry store, nor are we an art gallery,” Langhoff says. “We’re a hybrid, and we specialize in representing artists and designer-made jewelry with a story.” She also peppers the showroom with other inventory, such as purses, scarves, and nail polish (a nod to the intricate manicures some of the store’s associates sport). 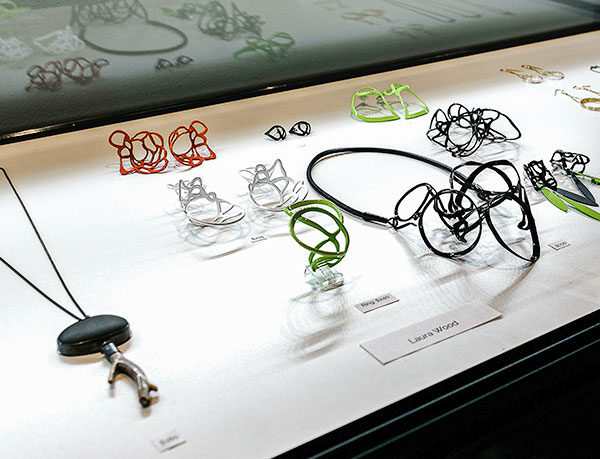 A Warm Sense of Place 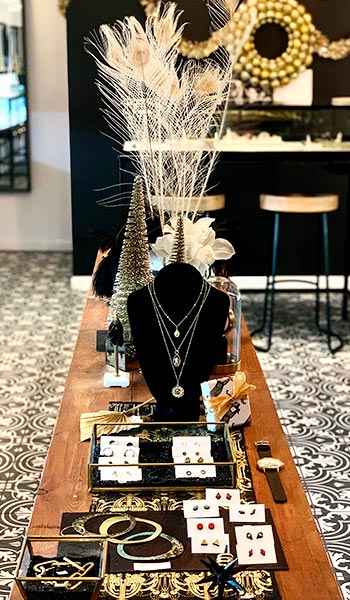 When creating Adornment + Theory, Langhoff, a 16-year resident of ever-evolving Logan Square, envisioned a retail environment simultaneously unique, beautiful, and accessible. She’s cultivated that vision through approachable price points as well as unconventional events like a nail art night and a pop-up tattoo shop. During quarantine, she started Adornment + Theory at Home, an Instagram TV series interviewing the store’s designers and makers. “We also hosted a Rihanna dance party and created an online printable gem coloring book,” says Langhoff. “The goal was to supply people with joy and positive associations with our brand.” A series of art deco wall graphics broadcasts the store’s five pillars—hospitality and service, ownership ­mentality, creative excellence, confident beauty, and team mentality—that Langhoff and her staff of four “bad-ass women” work to live each day. She and her associates are also “highly involved” with the Black Lives Matter movement. “Issues of racism and lack of diversity have been near and dear to my heart for years,” she says. “As a minority ­woman business owner, I am happy to see the discussions and much-needed work being done in many industries.” 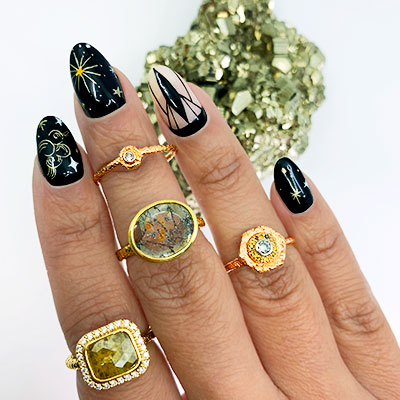 While the store reopened its doors on June 4, the march toward normalcy continues. “Remember that there will be bull and bear years, but we need to keep our mindset positive and focused,” Langhoff says of her plan. “Knowing that we need to remain flexible. Continuing to go above and beyond to service our clients and neighbors. Providing them the full Adornment + Theory experience in person or online.”