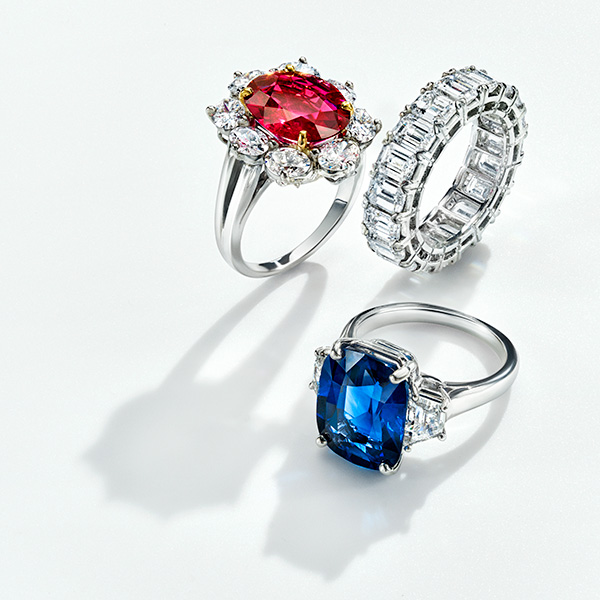 What does it take for jewelry to qualify for the “Made in the USA” label? Quite a bit, JCK learns. Is the effort worth it?

Chart Metalworks, a small jewelry brand based in Portland, Maine, uses a host of raw materials to fabricate its collection, including pewter, bronze, silver, paper, and resin. All are sourced from U.S. suppliers based primarily in the Northeast. The company touts its Made in the USA status proudly—for proof, see its recently revamped logo, which includes the phrase. Chart Metalworks’ website reveals that every piece of its nautical-inspired collection uses “U.S.-made hand-cast pieces” and is “made by Maine people.”

Another indie jewelry brand, Brook & York in Old Saybrook, Conn., also makes seaside-inspired jewelry. And like Chart Metalworks, it ­fabricates every piece of its collection in its local facility, using raw materials sourced ­exclusively from U.S. suppliers. It also says its products are Made in the USA. But ­according to the Federal Trade Commission (FTC), Brook & York technically cannot make that claim.

Real gold gets in the way. According to FTC guidelines passed in 1997, jewelry labeled Made in the USA or Made in USA must be produced with materials that are “all or virtually all” from America. And gold is not an American product. Therefore, any jewelry brand that uses gold can’t be labeled American made.

The standard, says Mark Hanna, chief marketing officer at the ­jewelry manufacturer Richline Group, “is technically impossible for precious metals products to achieve.” Hanna has been stumping for the FTC to rewrite the rules of the Made in the USA designation since 1998 and has written extensively on the issue. He, along with many others in the industry, want to see the policies loosened. “The standards as stated need to be updated to match the world, which is global,” he says.

Tiffany Stevens, president and CEO of the Jewelers Vigilance Committee, agrees. “We’re restricted as an industry right now ­because every single part of the product has to be made [in] and come from America,” she says.

A jewelry firm could “employ local people, do design locally, and have a business where you reform people coming out of the local justice system,” she adds, “but you still wouldn’t be Made in the USA if your gold isn’t from here.”

Hanna spoke on the subject at an FTC open forum in Washington, D.C., in September. He’d like to see the commission’s standards evolve to allow materials that originated overseas but have been “substantially transformed”—such as the melting of gold and other precious metals—to be labeled Made in the USA. “The FTC has to recognize that the current rules are a penalty to U.S. manufacturers,” he says.

They’re also loaded with irony: A company in the United States can ­produce a piece of jewelry using gold and gems, and if the firm exports the piece ­overseas, the export paperwork has to say that the jewelry was made in the United States. But the company cannot make that same claim on any paperwork—or as a label itself—if it ships that exact same product to another U.S. state.

The FTC’s compliance program dates back to the early 1940s, when it brought a case against the flashlight manufacturer Falcon Lamp Works based on deceptive Made in the USA claims. The FTC has taken the issue seriously ever since. Over the past two decades, the commission has taken 27 court actions against consumer companies it deemed noncompliant with its guidelines, according to agency data.

In 2016, FTC lawyers famously told Detroit-based watchmaker Shinola that its ads, which included a Where American Is Made slogan, “overstated the ­extent” to which its timepieces were manufactured in America. The company ended up dropping the slogan and adopted the less snappy Built in Detroit Using Swiss and Imported Parts—but not before Shinola founder Tom Kartsotis criticized the near-impossible benchmark for American brands.

The FTC defends its policies, saying they protect American consumers from fraudulent claims. “Consumers have continued to expect products advertised as Made in the USA to have no more than a minimal amount of imported content,” said Andrew Smith, director of the FTC’s Bureau of Consumer Protection, at the September FTC open forum. “We’ve chosen to focus our litigation efforts on egregious offenders, while aggressively working to prevent Made in the USA misrepresentations by providing extensive guidance and informal feedback to any company that seeks it.”

But critics of the FTC guidelines for jewelry and watches say the rules ­favor foreign companies over homegrown ones. And they cite the less restrictive ­standards for the Made in the USA designation in place for other industries. The auto­mobile industry, for example, can use the label even when a ­substantial percentage of raw materials used in a car originate overseas. And the textile industry can claim U.S. origin if a final product is manufactured in the United States, regardless of where materials earlier in the manufacturing process (yarn, fiber, etc.) came from. “The FTC is focusing on the wrong issue,” Hanna ­insists. “The issue is the creativity, the labor, the pride of the American worker. Not material origin.”

All of which might lead one to wonder—considering how exceedingly global the modern jewelry industry is today—about the tangible benefits of having a Made in the USA marker. How much of a leg up does the designation give jewelry producers and retailers?

“We’d love to use that Made in the USA terminology in our stores,” says Kathy Corey, vice president of merchandising and ­human ­resources at Waterville, Maine–based fine jewelry chain Day’s Jewelers. “It certainly is an added benefit to closing the sale. It kind of works in a similar way as the ethical and responsible sourcing issues do. More and more, customers want their jewelry to be made and sold by ethically responsible companies. And when people see a product is Made in the USA, they assume the chain of custody is ethical.”

Janice Sears, president of U.S.-made Chart Metalworks, agrees that the designation adds value for both retailers and consumers. “I think it’s really important and an attractive thing for some people that they know they’re buying American.”

Hanna is convinced the U.S. origin claim is especially meaningful to ­millennial consumers searching for ethical and responsible companies. The designation, he says, “comes with the understanding that the jewelry has been produced by American people, using American best practices and ethics.”

The FTC acknowledged as much in September. “Although Made in the USA is a straightforward claim, how consumers perceive that claim is anything but straightforward,” said the Bureau of Consumer Protection’s Smith. “For example, why do consumers want to purchase products that are made in the USA? Does it indicate that the company follows Fair Labor Standards or adheres to environmental protections? Does it mean that the product is of high quality? That the manufacturer employs U.S. workers? That the product is safe? That the product is healthy? Maybe all of the above.”