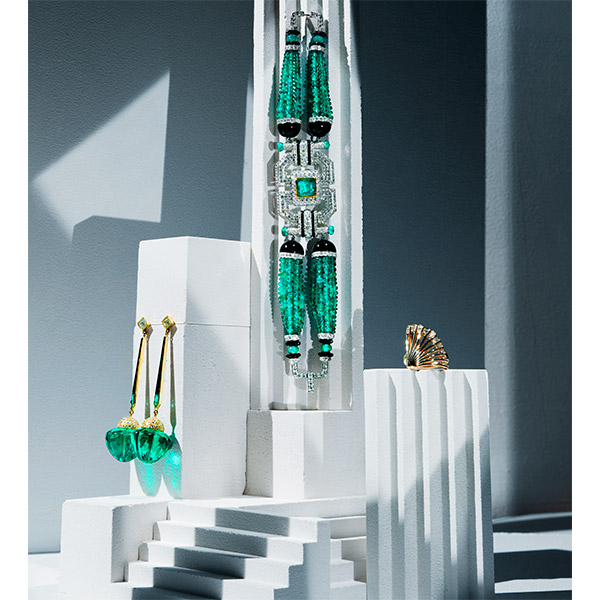 The century-old Art Deco movement remains an eternal source of inspiration for contemporary jewelers. We recap the era’s influence on jewelry design through the decades in anticipation of the next big comeback. (Spoiler: It’s already here.)

It would be hard to find someone in the jewelry industry who’s not well-versed in art deco style. Most would probably cite Cartier’s platinum and diamond jewels from the 1920s or Van Cleef & Arpels’ Mystery Set jarretières of the 1930s as the period’s most memorable emblems.

She and other jewelry historians point to master jewelers such as René Boivin, Jean Després, Raymond Templier, and Suzanne Belperron—and brands including Mauboussin, Boucheron, and Tiffany & Co., in addition to deco icons Cartier and Van Cleef—as the era’s definitive exemplars. Many favored bold geometric motifs and Egyptian Revival elements and executed their visions with step-cut diamonds, onyx, hard stones like coral and jade, and rock crystal.

The period owes its name to the Exposition Internationale des Arts Décoratifs et Industriels Modernes, which took place in Paris in 1925. The style it spawned reigned supreme until the eve of World War II, when art moderne segued into the Retro ­period, but deco’s influence on jewelry has been pervasive in nearly every decade since.

“Designers over the years have constantly found new ways to incorporate the hallmark features of the style, from streamlined elements inspired by the great architecture of the day to geometric patterns such as chevrons, zigzags, and starbursts,” says Peter Schaffer, director of A La Vieille Russie in New York City.

Interestingly, the term art deco didn’t enter the mainstream until the mid-1960s—and coincides with the period’s first of many revivals. It appeared in a 1966 article in The Times of London about “a nostalgic return to the design trends of the twenties.”  Journalist Hilary Gelson alluded to “Les Années 25,” a highly influential Musée des Arts Décoratifs exhibition celebrating “the style now known by connoisseurs as Art Deco.”

Throughout the 1960s, jewelry designers began to move away from the florals and bows of the 1950s, prompting many of them to rediscover, and mine, the art deco era for inspiration. Shapes were more sculptural, and the geometric elements were more exaggerated. Think glamorous bombe rings, op art black-and-white patterns, concentric circles, undulating C shapes, and sunburst motifs.

Meanwhile, the Cleopatra look, inspired by the iconic 1963 film starring Elizabeth Taylor, reinvigorated a taste for Egyptian motifs, one of the pillars of the art deco style that first captivated consumers in the 1920s (following the 1922 discovery of King Tut’s tomb).

In the 1970s, the art deco influence appears most notably in the works of Aldo Cipullo, an Italian designer who worked for Tiffany & Co. and Cartier as well as the American jeweler David Webb.

“Cipullo is best known for his famous Love and Juste Un Clou nail bracelets for Cartier, but when you see a large body of his work together, you truly see the brilliance of the art deco influence in his designs,” says Gus Davis, president of Camilla Dietz Bergeron, an estate dealer in New York City.

Meanwhile, Webb invoked the art deco aesthetic with “clean lines and geometric forms that recall a certain rectilinear sensibility,” says Mark Emanuel, co-owner of David Webb New York. “Also, in both the 1920s and 1970s, rock crystal saw a resurgence. And long sautoirs symbolized female empowerment—an important design theme in both the 1920s and the 1970s, and one we see today as well.”

The 1980s and 1990s nodded to art deco in a variety of ways, predominantly in the worlds of fashion and interiors (remember all those torchiere lamps?). Young jewelry designers studying in or moving to New York City absorbed the creative energy and iconic architecture that surrounded them.

Évocateur founder and designer Barbara Ross-Innamorati remembers the effect of seeing the Chrysler Building, Rockefeller Center, the Waldorf Astoria, and other art deco landmarks: “The striking quality of these architectural designs hit me like a lightning bolt,” she recalls.

Concurrently, the TV hit Miami Vice put that city’s art deco district on prominent display. “To this day, I get a lot of ­inspiration walking down Ocean Drive and Collins Avenue—that’s where I got the name for my Collins collection,” says contemporary designer Doryn Wallach, who vacationed in South Beach as a youngster. Her fine jewelry line is well-known for its neo-deco vibes.

Geometric motifs popped up on everything from Swatch watch faces to Esprit sweaters, and 1980s jewelry tended to ­exaggerate these elements. Yves Saint Laurent evoked the work of deco ­masters Belperron and Templier in oversize earrings and bracelets. And in 1985, the movie Desperately Seeking Susan sparked a renewed interest in Egyptian Revival ­jewelry, with its plot centered on a stolen pair of Nefertiti earrings and Madonna’s now-iconic cropped jacket embroidered with a mysterious pyramid.

In 1987, the Duchess of Windsor’s jewels came up for auction at Sotheby’s, rekindling a passion for the era’s treasures among collectors. The jeweler Neil Lane is a well-known deco devotee and managed to disrupt the pervasive minimalism of the late 1990s with his antique diamond acquisitions, which frequently made appearances on the red carpet.

For present-day jewelry designers, art deco has become a touchstone for concepts that feel clean and modern as opposed to ­romantic or a touch too pretty and ornate.

“Art deco will only gain traction in the 2020s,” predicts Will Kahn (@willsnotebook), Town & Country contributor and former jewelry director at Moda Operandi. “I think Nikos Koulis is the most notable designer pushing the art deco style forward. He takes classic art deco motifs and pushes them with modern scale, new shapes, and a unique mix of materials.”

And themes of female empowerment, as David Webb’s Emanuel notes, are more relevant than ever. But the big boom may not happen until 2025, the 100-year anniversary of the art deco movement’s official entrée into the annals of art history.

You can prepare for the revival by investing in the contemporary designers highlighted on these pages, who capture the deco vibe with just the right amount of 21st-century flair.