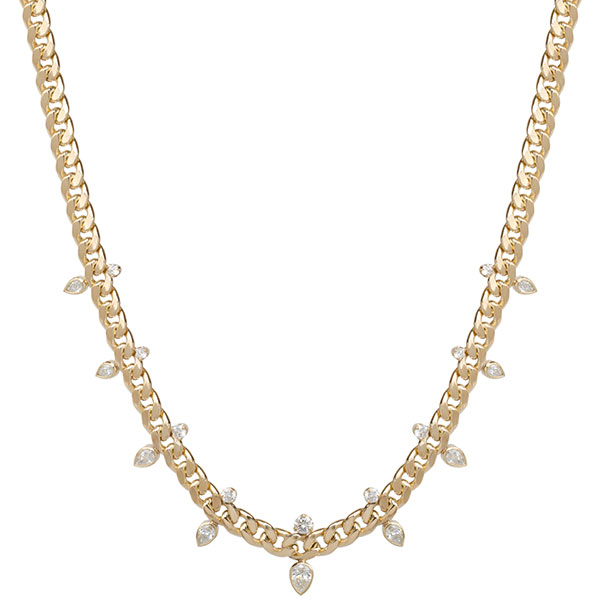 When thinking of Zoë Chicco, a brooch is likely the last item of jewelry that comes to mind. After all, the Los Angeles–based designer is known for modern, mostly minimal fine pieces. During her 20 years in business, she has become synonymous with a California aesthetic defined by made-to-layer, easy, and unfussy pieces such as chains of varying weight (from cable to a sizable curb), stacking rings, and personalized charms and pendants you rarely take off and look forward to adding to and rearranging regularly in order to reflect your mood.

That’s why a static and formal brooch doesn’t seem to fit into Chicco’s golden world drenched with L.A. light and the ease that comes along with it. But it’s the first piece she tinkered with as a child, creating her own jewelry from found pieces.

“Everything was a brooch,” says Chicco of her earliest jewelry-making memories. “My jewelry passion came from my dad’s mother, who always wore tons of jewelry. She had bangles on each wrist and tons of rings. You could hear her well before you saw her. I would go through her jewelry and try everything on and soon started putting things together.”

Metalsmithing and jewelry classes quickly became a passion for Chicco in high school, and the Pennsylvania native subsequently enrolled in Skidmore College to study art with a jewelry concentration, honing her skills (and cementing her future) as a trained bench jeweler. Time studying abroad in Italy added an even deeper layer of understanding the craft of making jewelry. “We were taught how to draw our own wire and hammer our own sheet,” recalls Chicco. “It was so cool to learn these techniques.”

This artisanal background in handmade fine jewelry, coupled with a commitment to create each piece on her own, helped her grow the business in a steady manner. “In the beginning, it was all about, ‘I have to make this,’ so pieces were very simple until I learned more processes. I was also limited to what I could afford to do. So there were no diamonds. It was mainly plain gold with a little hammered wire,” says Chicco about her start two decades ago.

Handmade has become a major pillar of her brand, and she’s managed to scale her craft to fuel a production chain that she claims she never could have predicted. “I didn’t think the business would be as big as it is now,” says Chicco. “It’s been 20 years. It did happen slowly; it did happen organically. We didn’t have a situation where all of a sudden we had this huge growth. In the beginning I was literally making everything myself in a closet.”

Today, gazing out into an airy loft space housing rows and rows of bench jewelers all pumping out handmade pieces, the idea of a closet-size workroom seems practically comical.

Chicco’s 17 bench jewelers create everything from her pearl drop earrings to rectangular gold pendants on a daily basis. There is a modern-day Willy Wonka vibe to the unique space she has created within the unassuming site above a bridal store in the heart of downtown L.A. Her childhood tinkering has become a full-scale production facility where raw materials come in, and some of today’s trendiest, most influential jewelry is sent out to flood stores and online retailers including Saks Fifth Avenue, Nordstrom, Bloomingdale’s, and Moda Operandi.

Doing it her way has clearly worked out for Chicco, who applies the same thinking to production that she does to design. Creating pieces that she has always wanted to wear herself has been her MO from the start and what has resonated most with stores and customers.

“That breezy summery vibe—layered gold—that’s my vibe in general. It just makes sense,” says Chicco, who has lived in L.A. for 17 years. “At the same time, you’re showing more skin, it’s warm, you’re layering on pieces. That’s what I was wearing; that’s what I wanted to wear. It still carries on today. The line is so huge because things are so easy and everyday and feel modern enough that we don’t retire a lot.”

Chicco’s line sheet is more than 80 pages long and still carries a few pieces that were conceptualized 20 years ago.

Her Paris collection, a characteristically robust group of pieces inspired by a ceiling in the City of Lights that caught the designer’s eye, has become one of the most popular in the entire line. East-west set emerald-cut diamonds in a curb chain or a simple gold band, as well as angular mobile earrings punctuated by diamonds, have become hallmarks of her Paris collection.

“The idea with the Paris collection is mixed diamond shapes, mixed settings, and mixed stones,” says Chicco. The ceiling that gave her the initial idea, she adds, “is a very simple thing but inspired one of our best-selling collections that we still add to each season.”

Pearls, which have been in the line for several years, have proved to be a consistent best seller for the Zoë Chicco brand as well. The designer uses traditional freshwater cultured and baroque pearls, usually set in 14k gold, in reversible stud earrings where pearls are paired with diamonds, a gold bead and pearl eternity necklace, and an oval link bracelet with a dangling baroque pearl, among other styles.

“Three or four years ago, we heard, ‘Pearls are back!’” says Chicco. “I thought it was going to be a flash in the pan and every season we sell it and it makes sense, because pearls are classic.”

She started out using simple round pearls in varying sizes, but after seeing the success with those, she began getting more creative with shapes and settings. “We do a modern-day pearl,” says Chicco. “These are not your grandma’s pearls.”

Baroque pearls have been an especially new and playful way for Chicco to take a different stance on pearls. Her latest pieces have baroque pearl pendants with a white diamond set underneath. “The weight of the baroque pearls makes for a great layering piece,” she says. “It’s a fun new way to mix it up and do it differently. I’m not a pearl girl, but now I wear a long charm necklace layered with a pearl pretty much every day.”

If Chicco’s 20-year track record of success has proved anything, it’s the pieces she herself wants to wear every day that keep her brand and business charting forward.