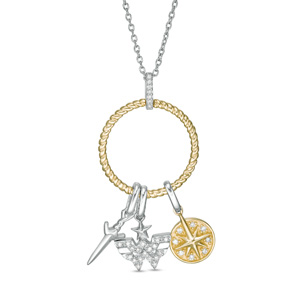 Zales is paying homage to the best lasso wrangler in the superhero universe—with a new fine jewelry collection that riffs on Wonder Woman’s iconic outfit and accoutrements.

The Zales Wonder Woman 1984 collection, which is already available in stores and online, is the official jewelry of the second Wonder Woman movie, Wonder Woman 1984, starring Gal Gadot as the superhero. Zales, which is owned by Signet Jewelers, is exclusively retailing the collection in its store and through its website.

Wonder Woman 1984 is scheduled to be released Aug. 12, though COVID-19 infection rates are bound to dictate whether the film will screen in physical theaters. This year’s Comic-Con festival—ground zero for superhero film and TV debuts and reunions—is going virtual next week, in lieu of a live event.

Thankfully, Wonder Woman’s appeal doesn’t rely on pop-culture fireworks. Like Barbie and Barbra Streisand, the beloved superhero is an enduring icon with a rock-solid fan base.

The Zales collection will likely appeal to cosplayers and nostalgic TV buffs alike, because Wonder Woman’s uniform and lasso inform many of the designs. Her unique tiara shape (more like television’s Linda Carter’s than Gal Gadot’s) is featured in rings and pendants. Her mighty “Lasso of Truth” forms a coiled 10k yellow gold ring and adds cabled charm to a pair of 10k gold hoop earrings.

Then there’s the famous WW logo, which pops up in the collection via metal and gemstones: A 10k gold necklace anchors a retro-script WW pendant paved in 1/8 ct. t.w. diamonds ($499.99). The same winged-Ws logo is miniaturized to make 10k yellow gold diamond-pavé studs ($399.99).

Less low-key (did I just called Wonder Woman diamond earrings low-key??) are a ring and pendant with the the logo wrought in red garnets and navy blue sapphires—red, white, and blue!—priced at $299.99 and $399.99, respectively.

Sadly, none of the jewels are infused with Wonder Woman’s potent superpowers. But each one is powerfully fun.

See some standout styles below, and see the entire collection here.