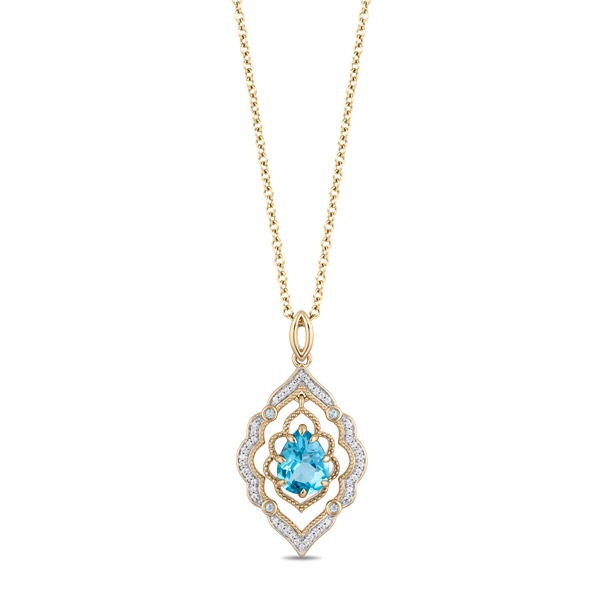 JCK‘s resident Disney nut here, reporting on the latest news from the Mouse. This time, it’s Signet’s Zales retail stores getting in on the magical action—the magction?

In partnership with Disney, Zales has introduced a new addition to its Enchanted Disney Fine Jewelry collection, this one featuring jewelry inspired by upcoming Aladdin live-action film.

If you’re familiar with the original 1992 animated version of the film, Aladdin features an iconic scene in the Cave of Wonders, a treasure-laden death trap through which the title character must endeavor to uncover the infamous genie lamp. The new live-action film seeks to re-create these iconic scenes (I can’t wait to see how they do it), and that’s where Zales draws the inspiration for its new collection.

Styles seen in the Cave of Wonders scenes are what you’ll find in this new line, as well as Swiss blue topaz jewels evoking Princess Jasmine’s famous costume. In all, there are 20 pieces in the line—including engagement jewelry, for the seriously romantic lovers of Agrabah—and it’s available in-store and online now.

“These exclusive pieces combine the rich iconography of the film with the emotional meaning an individual piece of jewelry carries,” said Jamie L. Singleton, president of Kay, Zales, and Peoples Jewellers, in a statement. “We know these new designs will make a lot of wishes come true.”

A number of marketing initiatives support this new collection, including a television commercial that will make its debut in a couple of weeks.

Zales is also offering a contest to celebrate not only the new collection, but also its community of women shoppers. The retailer is asking its customers, in a 150-word essay, to nominate a woman in their life whose “brilliance has shown through” (a play on Aladdin‘s “diamond in the rough,” I take it), through acts of kindness and strength. The winning entry will send the nominated woman and a guest (hopefully she picks the person who nominated her!) to the world premiere of the new film. Contest rules can be seen here.

For this new addition to Zales’ Enchanted Disney collection (Disney Princess and Disney Villains lines are available, too), visit zales.com.