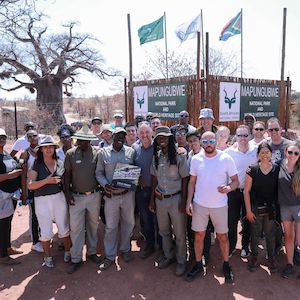 In 2016, Rami Baron was sitting at a board meeting at the World Federation of Diamond Bourses when he realized something—everyone in the room was in their 60s and 70s.

“I said, ‘We need to get more young people into the conversation,’ ” says Baron, who is also the president of the Diamond Dealers Club of Australia. “We need to open the door to the new generation.”

As a result, he decided to form a new group, the Young Diamantaires—with young defined as under 45. (Baron, 56, acknowledges he doesn’t really qualify.)

The group started with an 11-person WhatsApp group chat and has since grown to more than 300 members from 18 countries.

“On the WhatsApp group, it was just casual conversation,” says Baron. “Then we’d meet at trade shows and have breakfast with speakers. It just kept growing from there.”

The group took a big leap forward last year, he said, when De Beers invited 25 members on a trip to South Africa. (A planned trip to India this year had to be canceled because of COVID-19.)

Even as it’s expanded, and recently added a website, the group has stayed informal—there’s no president or chairman, though there are committees to handle things like communications and fundraising. Another committee answers consumer questions about the industry on forums such as Reddit.

Robin Bhebhe, 26, is the kind of young person the group is targeting. Born in Zimbabwe, he traveled to South Africa on a gap year and ended up studying and “falling in love” with diamond cutting and polishing.

He soon received a scholarship to the GIA and founded, with a partner, Outclass Crystallized Gems, a small South African diamond polisher. That makes him a relatively rare breed—a first-generation diamantaire.

Despite the common perception—even in the industry—that the diamond industry is aging, Bhebhe says there’s more young folks than commonly assumed.

“They are mostly sort of isolated and separated and doing their own thing in their own little corner,” he says. “In South Africa, there’s a lot of programs to bring in young people, but many of us were sort of isolated. The group is starting to help us to come together. It really feels like a family.”

The big rule on the Young Diamantaire WhatsApp chat is “respect,” Baron says.

“Whenever anyone is disrespectful, they’re taken out like that,” he says. “When someone in the group posts good news, you have 200 people congratulating them. They don’t even know each other, they may have never met, but there’s a big sense of family.”

The communal aspect was especially important around April, when the whole world went into COVID-19 lockdown.

“It was quite special because we would celebrate people’s birthdays,” says Bhebhe. “You didn’t feel alone in your apartment, you had all these people from all over the world celebrating your birthday. It showed it was growing more into a family.”

Baron says that the tenor of the chats is different than the standard diamond talk.

“My generation and the generation before me, whenever they talk about the diamond industry, they always like to talk about the good old days and when we made money,” Baron says. “It’s all historical perspective. It’s a bit boring and tiresome to keep regurgitating this conversation because things are different.”

The young diamantaires “look at everything with fresh eyes,” he says. “Sometimes you do hear older ideas come forward that didn’t work before. But they say they can work today because the world is different. They want to learn new things. They are very open, and they’re very hungry for knowledge and for new ideas.”

Bhebhe agrees: “For us, we don’t want to always debate synthetic versus natural. Our generation is all about, let’s go out and see what the natural industry can do for the community, what they are doing for the environment, and how can we collaborate differently.”

That is what led to the group’s first project (see video below), which will benefit the Renaissance Secondary School, located near De Beers’ Venetia mine in Limpopo. The school, built by De Beers in cooperation with the South African government, was one of the stops the group visited on its South Africa trip. Attendees were disconcerted to find that most of its poor students only had one meal a day, and the school didn’t have a library or kitchen. That spurred the Young Diamantaires to hold its first fundraiser with the goal of building both.

In five hours, it raised more than $20,000, says Tamara Gabay, who heads the group’s fundraising committee, as well as business development for Sarine Technologies in New Zealand and Australia. “That’s especially impressive because it happened during hard times, corona time,” she says.

Going forward, Gabay says the group wants to work with other industry organizations on social projects and initiatives, noting that its members don’t dismiss the hard-won wisdom and perspective of industry vets. But as the trade continues to change, this group hopes to be a force guiding that evolution.

“We feel like we can be the voice of the industry for the future,” she says.

Which, in part, explains why everyone from the World Federation to De Beers has become so enthusiastic about this group: Members aren’t just talking about leading the industry’s future. They believe that it has one.