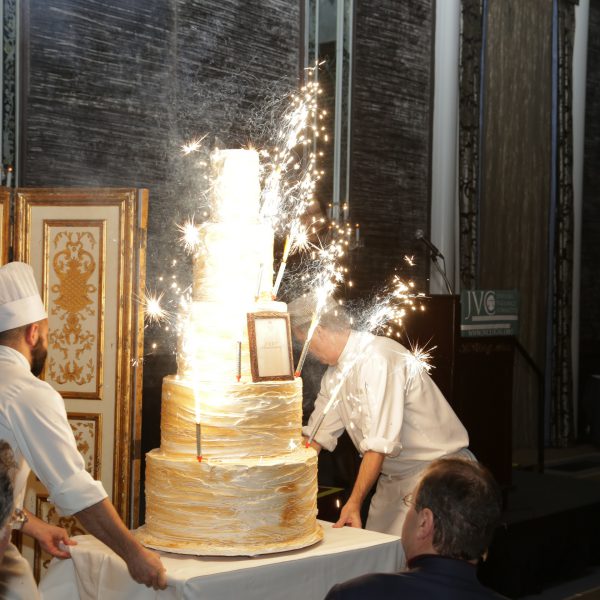 The year kicks off with a movie, the 24 Karat Club’s good-bye to the Waldorf, and a reminder to stay special

From Jan. 12 through Jan. 14, the industry celebrated 24 Karat Weekend, its traditional kickoff to the new year, which this year featured a fireworks-topped birthday cake and a performance by Kristin Chenoweth.

The centennial was marked with an elaborate birthday cake covered with sparklers (pictured), as well as a newly commissioned history of the JVC written by longtime industry scribe Peggy Jo Donahue. Gardner’s 19-year tenure at the JVC was hailed by a series of speakers, including Doug Hucker of American Gem Trade Association, GIA president and CEO Susan Jacques, and former JVC chairman Steven Kaiser, who credited her with reviving a once-moribund organization.

“There will be another head of the JVC,” Hucker said, “but they will never replace Cecilia.”

Former JVC recording secretary Joel Schechter was honored with the organization’s Stanley Schechter Award, bestowed on industry members that promote integrity. The presentation was especially poignant as the award was named for Schechter’s late father.

Jim Rosenheim, chairman of Washington D.C.–based Tiny Jewel Box, was given the Gem Award for Lifetime Achievement. In his acceptance speech, Rosenheim said he was inspired by his father’s motto, “If it’s not special, it’s not here.”

On Saturday night, the 24 Karat Club of the City of New York hosted Tony- and Emmy-winning actress Kristin Chenoweth.

Chenoweth performed a characteristically eclectic selection of songs, including numbers from her new album, The Art of Elegance (“Zing! Went the Strings of My Heart,” “I Get Along Without You Very Well,” and her encore, “Smile,” performed, miraculously, without a microphone); the bluesy “Little Sparrow,” made famous by one of Chenoweth’s idols, Dolly Parton; and, from Wicked, Chenoweth’s biggest Broadway hit, “Popular,” which the singer lovingly dedicated to the 24 Karat Club’s Ronnie Vanderlinden (“Popular! I’ll help you be popular!… I’ll show you what shoes to wear! How to fix your hair!”).

This will be the event’s final year at the Waldorf Astoria for at least three years, while the famed hotel undergoes renovations. A new locale has not yet been chosen.