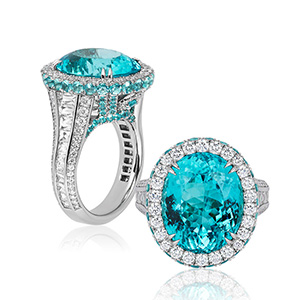 The American Gem Trade Association (AGTA) has announced the winners of its 2018 design competition, the AGTA Spectrum Awards.

The competition was held Aug. 4–5 in New York City and is widely considered one of the top design competitions for jewelry featuring colored gems, cultured pearls, and loose gems.

“As someone who has nurtured a lifelong love affair with colored gemstones and pearls, the AGTA Spectrum Awards judging week is unbridled pleasure,” said Douglas K. Hucker, CEO of AGTA in a statement. “It feeds my color jones, and it is one of the most important endeavors AGTA pursues in its mission to spread the gospel of color.”

More than 400 designers entered the competition this year, among them “a wave of new designers and first-time entrants—young people with fresh perspectives that were willing to embrace creative risk in their work,” said Hucker.

The competition also saw an increase in the loose gemstones and gem-cutting categories.

Below are the designs that ultimately took home AGTA’s top honors.

(All images courtesy of AGTA)