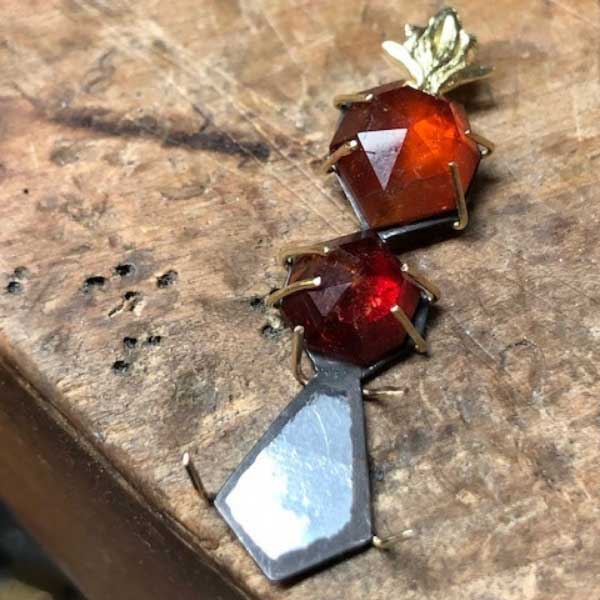 The week after JCK Tucson, I like to see what jewelry designers brought home from the various shows, and Instagram has afforded innumerable sneak peeks at the collective haul. The Chicago-based designer Whitney Abrams has been sharing several pics of her #tucsonloot, a hoard that includes piles of opal doublets, bits of glossy red branch coral, a stack of vintage Metalsmith magazines, and large, drusy-veined ammonites.

Abrams has been pounding the Tucson Gem Show pavement for 22 years, but she also does a fair amount of her gem hunting online. Which brings us to the stash of hessonite garnets shown below.

Procured through Instagram stone seller @lagoon_gems, the rose-cut stones hail from Afghanistan. “The owner, Amin, describes his stones as ethically sourced, so that is a plus,” says Abrams. “I have purchased other rose-cuts from Amin in the past. He sends me messages when he has material he thinks I will like.”

Abrams has a particular fondness for rose-cuts, as do many of her peers and customers. “This thicker, larger faceting seems to be on trend at the moment,” she says. “I notice many of these stones on Instagram, and saw some at the most recent Tucson shows, although I first discovered these larger rose-cut stones at the GJX show about four years ago.”

As for the hessonite garnets, Abrams says their color reminded her of the color of a heart. “I thought of a pendant design, since it would be worn close to the heart,” she says.

First, the designer experimented with layouts using different combinations of the stones in the parcel. “When I found a combination that spoke to me, I started to craft the design on sterling silver sheet,” she says. “I oxidized the silver with a new product, JAX Ultra Black, which worked well and fast.

“I thought the black set off the reddish-orange color of the stones nicely, and using yellow gold prongs accentuated the faceting.”