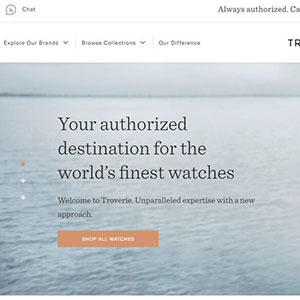 Troverie, an e-commerce platform that conducts authorized sales of top watch brands, debuted on Tuesday with the support of both watch companies and leading independent retailers.

Sales are fulfilled by a network of 26 high-end jewelers, comprising 80 stores in 23 markets. A list can be seen here.

CEO Fred Levin, former head of NPD’s luxury group and the Concord Watch Co., founded the site in response to retailers’ complaints about the gray market.

“In 2016, I was ready to do [NPD’s] industry overview,” he says. “And everyone said we would rather talk about [how] the retailing model for the watch industry is broken.”

Levin wants Troverie to fill what he calls a “gaping hole” in the industry. According to its research, 57 percent of watch customers prefer three things: an omnichannel experience, manufacturer-authorized sales, and multi-brand stores, versus monobrand boutiques.

And yet fewer than 5 percent of watch sales meet those criteria, as watchmakers generally forbid jewelers from selling their products anywhere but over the counter.

“It’s very difficult for watch companies to come up with a solution that allows independent jewelers to sell online,” says Levin. “If you were Patek Philippe, you would have to manage your exposure on 60 sites 24 hours a day.”

Yet watchmakers were persuaded to let their product be listed on Troverie, he says, because it’s a limited platform they can control.

The site’s model is considerably more complex than that of the typical e-tailer. For one, it doesn’t carry inventory. After each order, customers have the choice of getting the product shipped to them or, if possible, picking it up at a local store.

If the customer chooses to have the item shipped—and Levin believes most will—the order is fulfilled by a network retailer with that item in stock, using Troverie’s packaging. However, unlike most clicks-and-bricks setups, the sale won’t necessarily be assigned to the nearest retailer, but the one who scores best on customer-satisfaction surveys, which are calculated based on a 90-day rolling average.

“A retailer doing a phenomenal job is more important than proximity,” Levin says. “We want to make sure the retailers always provide extraordinary service. I believe this is a fundamental pillar of delivering on our vision.”

Nor will sales emulate the push-button transactions one sees on Amazon. Each retailer will have at least one Troverie ambassador, who, after the sale, will call the customer to discuss sizing and delivery issues.

“Customers will know that if they have an issue, there is someone they can go to,” says Levin.

Once the sale is done, Troverie takes a cut, since it bears the cost of customer acquisition and fraud risk.

Troverie is currently not taking on new members for its jeweler network, though at some point it hopes to add authorized dealers. Multi-brand majors like Jared and Tourneau probably won’t be welcomed: “This solution is based on independent jewelers,” Levin says.

Marketing will be primarily digital and lean heavily on search engine optimization. The site’s name stems from the word trove, defined on Google as “a store of valuable or delightful things.”

According to Crunchbase, Troverie’s parent company, Authorized Luxury Group, raised $2.5 million in a September 2017 financing round. (Without giving figures, the company says that was the only the first close of that round, and that it’s raised more funding in two rounds since then.)  While the company has angel investors, a third of its capital comes from jewelers in its network, Levin says. Some brands wanted to invest but were told no, as that would be a conflict.

Mark Udell, CEO of London Jewelers, one of the retailers in the network, says he’s a firm believer in the site’s concept and likes that it’s promoting buying from authorized dealers.

“I always say, ‘Would you buy a Mercedes from a gas station?’ No, you’d rather to go to a Mercedes dealer. It’s the same here.’

The story has been updated to include the information that the company had other financing rounds.