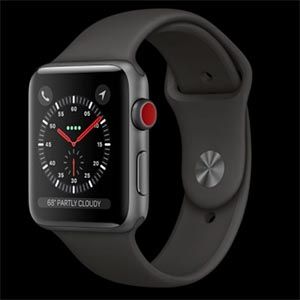 Tomorrow, at a meeting at the newly built Steve Jobs Theater in Cupertino, Calif., Apple is expected to spill the beans on its Series 3 Apple Watch, unveiling the updated device along with the next iteration of the iPhone.

The tech company’s dedication to the ongoing development of its flagship wearable—which reportedly will include the ability to make and receive phone calls in its new iteration—is a major reason why a consumer analytics firm, Berg Insight, is forecasting that wearable shipments will reach 262.5 million units by 2021.

Fitness and activity trackers will account for the largest percentage of wearable shipments going forward, with smartwatches becoming, “the largest device category,” reaching shipments of 115.0 million devices in 2021, up from 20.7 million units in 2016.

While Apple leads the pack in smartwatch sales (and is expected to remain the leader), companies including Garmin and Fitbit have released new smartwatches for fall and are poised to capture large slices of the consumer pie this year and next.