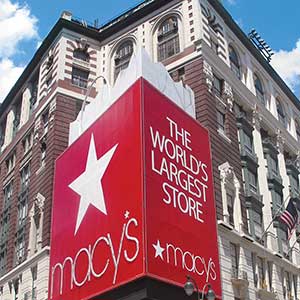 The retailer reported that many of the stores in its portfolio are more valuable as real estate holdings (ouch!) than as actual retail locations.

Retail industry watchers have been forecasting the slow demise of the classic department store for while, as online shopping increasingly reveals that full-priced, oversized retail locations aren’t serving the modern deal-hunting consumer well.

We asked IBISWorld industry research analyst Madeline Hurley to share her thoughts on Macy’s announcement—and where the traditional department store is heading:

JCK: What is behind the Macy’s store closures?

Madeline Hurley: Falling mall foot traffic and a shift toward online shopping have severely impacted Macy’s performance. The company has also struggled with competition from off-price stores and smaller-store formats.

What does this news mean (or signify) for the retail industry?

The store closures further confirm that traditional mall “anchor store” retailing is on the decline. Although the announcement of 100 stores closing has been the most extreme, Macy’s and other large department stores have been trimming store counts for the past few years. The store reductions indicate that there are too many department stores operating in a highly saturated and rapidly changing retail market.

What factors are behind the department store slowdown?

Rather than shopping at department stores, many consumers have shifted to online, off-price, and smaller format specialty stores. Online shopping has become an increasingly attractive way for consumers to research and purchase goods without leaving their couch. Off-price stores, on the other hand, have lured consumers in by offering similar products and name-brand merchandise at heavily discounted prices. This shift has left large department store retailers with an excess of inventory and retail space.

What do you see in the future for department stores?

Over the next few years, many large department stores will continue to trim their store counts. Many of these stores will also look to alternative format stores such as off-price or fast fashion to generate sales growth. Nordstrom, for example, plans to expand their Nordstrom Rack brand, which has performed well over the past five years. Many department stores will also invest in their online channel in order to make up for losses in their brick-and-mortar locations.

How, in your opinion, could department stores get more competitive with online and other brick-and-mortar stores?

Although competing will be difficult, department stores can adjust to cater to shifting consumer preferences. By both expanding their online channel and optimizing retail space, department store retailers may be able to mitigate further losses. Additionally, implementing and enhancing existing services such as free shipping, returns, and loyalty programs may also help these companies compete with alternative retailers.